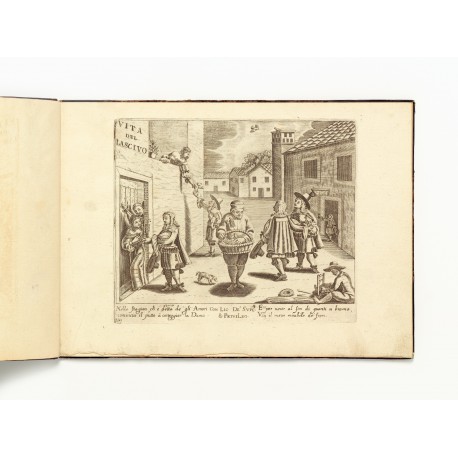 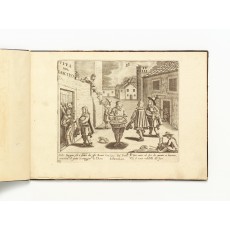 An engraved ‘Life of the Rake’, an extremely rare set of prints retelling the cautionary tale of the Prodigal Son in seventeenth-century Venice.

paper watermark pm within a circle surmounted by a trifoliate leaf (height 65 mm).1

All the prints good impressions in excellent state of pres­ervation. Corners of binding rubbed. 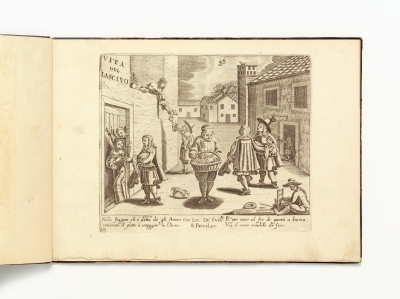 An engraved ‘Life of the Rake’, an extremely rare set of prints retelling the caution­ary tale of the Prodigal Son in seventeenth-century Venice.

The work is an early example of a new genre of popular prints with didactic intentions that flourished mostly in the cities of Venice and Rome, conveying normative social values simultaneously (and often redundantly) by both image and brief moralising text. Such prints appealed to a new public situated between the educated elite and the consumers of roughly-illustrated broadsheets, and were destined for the most part for domestic use and the edification of youth.2 The new print genre promoted ‘correct’ and desirable behaviour through both ‘positive’ (historical or allegorical exempla) and ‘negative examples’, such as the heedless lives of a prostitute and her client which are recounted here in a series of twelve episodes. An inscription on the first print ‘Con Licentia de’Superiori & Priuilegio’ confirms that the social values expressed were endorsed by local ecclesiastical and political authority (the Reformatori dello Studio di Padua and Venetian Senate respectively).

The prototypes of our publication were multi-vignette broadsheets composed of a number of small, sequentially placed images with brief texts placed below (a type of early ‘comic strip’). The earliest known broadsheet ‘Life of the Harlot’ was printed probably in Venice about 1600; the earliest surviving broadsheet ‘Life of a Rake’ was pub­lished at Rome by Callisto Ferrante in 1611.3 In turn, our Vita del Lascivo is identified as one of the proto­types and precedents of Hogarth’s narrative series, the ‘Harlot’s Progress’ (painted in 1731, engraved in 1732) and ‘Rake’s Progress’ (painted in 1733, engraved in 1735).4

A Roman publisher’s catalogue of 1614 advertising two broadsheets, ‘The Life and Fate of Whores’ and ‘The Life and Fate of those who frequent Whores’, suggests that the multi-image broadsheets were sometimes conceived as pendants.5 Our Vita del Lascivo is thus assumed to be the pendant to a lost ‘Vita della Cortigiana’, similarly developed in twelve scenes and set in Venice, which survives in versions engraved by Giacomo Piccini after designs by Curtio Castagna (Venice circa 1650),6 by Giuseppe Longhi (Bologna circa 1660),7 and by Federico Agnelli (Milan circa 1700).8 It is notable that our ‘Lascivo’ prints are smaller than both Piccini and Longhi’s versions of the ‘Cortigiana’ prints and that the verses below each scene are also reduced (from three stanzas of terza rima to a quatrain). 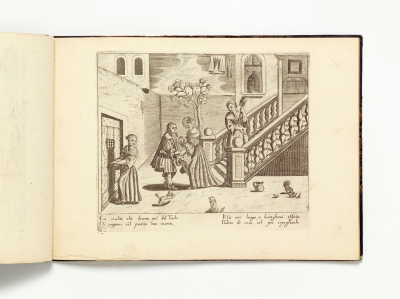 Like the young man of the 1611 broadsheet, the ‘Lascivo’ begins by courting a courtesan at her win­dow; it is spring, the pigeons are mating, and he offers her a flower. We assume he has no independ­ent means, because in the next scene he steals a pair of flame-coloured English stockings for her sake from a haberdasher, which gains him entry (scene three) to her apartments (the courtesan’s servant locks the door behind him, suggesting there will be no escape; a caged bird surveys the scene). Then fol­lows the father’s violent expulsion of the wastrel from the family home as punishment for his indis­cretion, ignoring his mother’s pleas. In the fifth scene, the ‘Lascivo’ obtains his inheritance (the Prodigal’s ‘portion’) secretly from his mother, and in the sixth, he returns triumphantly to his mistress, bringing this time a basket of fowl as well as flow­ers, and afterwards is shown living lavishly, enjoy­ing a formal banquet with musical accompaniment, in the company of two ladies and a friend.

In time the ‘Lascivo’ becomes a victim of his pride: in scene eight he purchases a fake German barony, and retires with his mistress to a country villa, where he becomes even more profligate. ‘From swindling [an allusion to his assumed German title] the unfortunate now advances to gam­bling’ says the text under scene nine, where we see the ‘Lascivo’ being fleeced by two women and by a fellow-gambler. Having lost his fortune and been jilted by his mistress, the ‘Lascivo’ re­sorts to obtaining money through crime – a street robbery, for which he is arrested by the police, and taken to prison (scene ten). He is res­cued in the penultimate scene by the charity of a true friend. Although freed from prison, the dishonoured ‘Lascivo’ is unable to earn a living, and we see him for the last time in a soup-line out­side a hospital for the destitute.

The difference in moral content and purpose of the two narratives, if they were indeed issued as pendants, is remarkable. In the ‘Life of the Harlot’, a young girl of humble social class is seduced by a young rake, becomes his mistress, and begins to enjoy a life of luxury. During the carnival season she gives her attention to a foreigner, who quickly installs her in a fine house; the ‘first lover’ surprises them there and kills his rival; the unfortunate girl has to sell her possessions, and turns common pros­titute; ravaged by disease, she descends to begging, and dies in a hospital.9 In contrast, the artist of the ‘Life of the Rake’ series pun­ishes his hero gently, sparing him the final judgment of social rejection, syphilis, and death; evidently, the courtesan was regarded as a greater threat to society than her client/victim. The ‘Lascivo’ is pre­sented in fact with some sympathy, as the spoiled child of a noble fam­ily, alternately tyrannized and indulged by his parents, whose behaviour is derided as much as the promis­cuous life of the son himself. In several scenes he is overshadowed by his mis­tress, who occupies centre stage; in some others, he almost disappears. His rakishness is treated with light humour, as in the scene where his avaricious father beats him out of the house, like the miserly Pantalone in the Commedia dell’Arte, and the publication provides amusement and edification in almost equal measure. 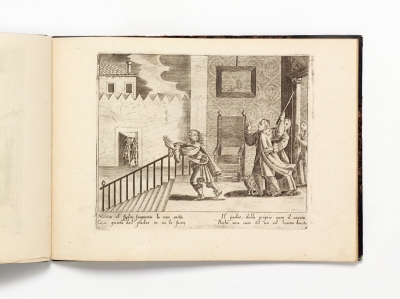 The anonymous artist enlivens the scenes with subsidiary figures – a chair mender, a group of little boys playing marbles, various street vendors – and these together with richly-detailed views of familiar and less-familiar Venetian sights – the haberdasher’s shop at the ‘Insegna della Maestrada’, the state prison or Piombi (from which Casanova in the next century made his celebrated escape), the civic hospital (the Lion of Saint Mark above the gateway and dress of the intendant indicate that it was run by a secular rather than by a religious authority) – throw ‘fresh light… upon the peculiar character of the city in which the story is set’.10 Accordingly, the prints are proving useful to scholars in different con­texts.11

Like many popular prints, the suite is now extremely rare, with just four other copies known: