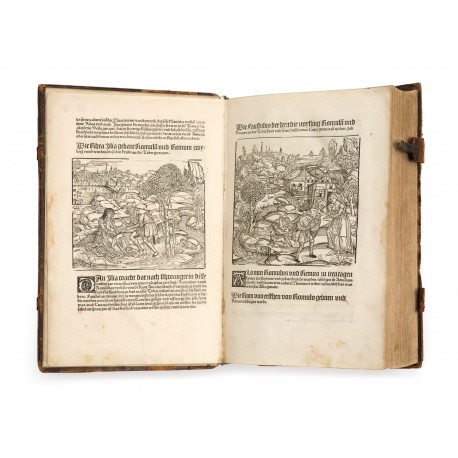 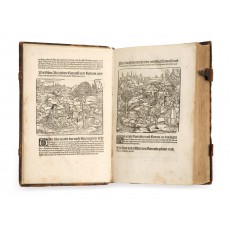 First printing of a revised and enlarged German translation of Livy's Ab urbe condita, featuring illustrations from woodblocks cut for editions published by Johann Schöffer at Mainz in 1505, and by Johann Grüninger at Strasbourg in 1507, newly married with a large and highly acclaimed set of blocks attributed to Conrad Faber von Creuznach.

Folio l2 torn and closed without loss, blank corner of folio i5 torn away, light waterstain in a few mar­gins, otherwise a remarkably clean and fresh copy, in wholly original condition. Binding abraded, joints cracked and back worn, but still sound.

First printing of a revised and enlarged German translation of Livy’s Ab urbe condita, featuring illustrations from woodblocks cut for editions published by Johann Schöffer at Mainz in 1505, and by Johann Grüninger at Strasbourg in 1507, newly married with a large and highly acclaimed set of blocks attributed to Conrad Faber von Creuznach. 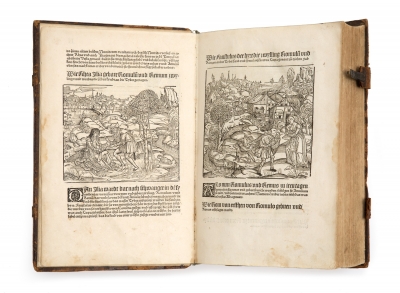 Image
Livy's account of Rome's foundation myth: the abandonment of Romulus and Remus in the Tiber, and their rescue by the shepherd Faustulus and his wife Larentia 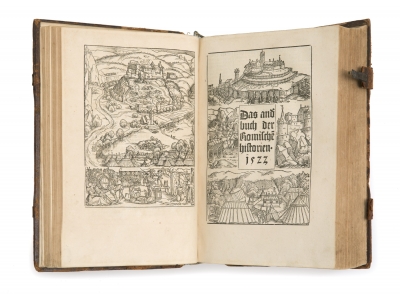 Image
Woodcut views of Ebernburg and Veste Landsthul, where Franz von Sickingen was besieged and died (1523).
Height of binding 325 mm 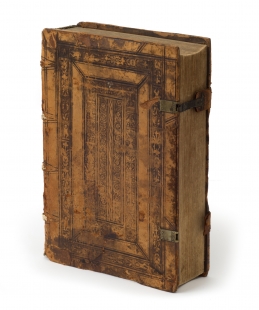 The editor, Nikolaus Fabri von Carbach (circa 1485–circa 1534), a lecturer in ancient his­tory at the University of Mainz, had discovered in the library of Mainz cathedral a manu­script of Livy containing Books 33–40, including two sections which had been missing so far (it is still our only source for part of Book 40). This manuscript (now lost) served as the basis for an edition in Latin which he published in 1518, in collaboration with Wolfgang Angst, a corrector for the Schöffer publishing house, and also for this revised and enlarged edition of the Schöfferlin-Wittich translation.

In Schöffer’s 1505 edition, the text is illustrated by 233 woodcuts (including repeats) by several anonymous cutters adapting models in Venetian book illustration.2 The best of these woodcuts traditionally are credited to ‘Der Meister der Sebastian-Legende’, and the best of those introduced in Grüninger’s 1507 edition to ‘Der Meister des Freiburger Altars’.3 For this revised and enlarged edition, the publisher commissioned a large number of new woodcut scenes of Roman history from a designer in his employ, whose identity is uncer­tain. Thormählen confidently identified him as Conrad Faber von Creuznach (circa 1490–circa 1553); subsequent investigation of Faber’s oeuvre has cast doubt on her attribution, but supplied no alternative.4 Schöffer also introduced woodcuts designed for his other publi­cations, including views of the sieges of Ebernburg and Landstuhl, where Franz von Sickingen was wounded and died (cut for a Warlicher Bericht written by Conrad Sturm and published anonymously by Schöffer in 1523).5

Reprinted from the 1505 edition (folio π2 verso) is the famous dedication to the emperor Maximilian, probably written by Ivo Wittich at the instigation of Johann Schöffer, in which Gutenberg is retroactively identified as ‘originator’ of the process of ‘mechanical texting’, while Johann Fust and the lately-deceased Peter Schöffer (Johann’s grandfather and father respectively) are jointly credited for ‘improving’ the art.6