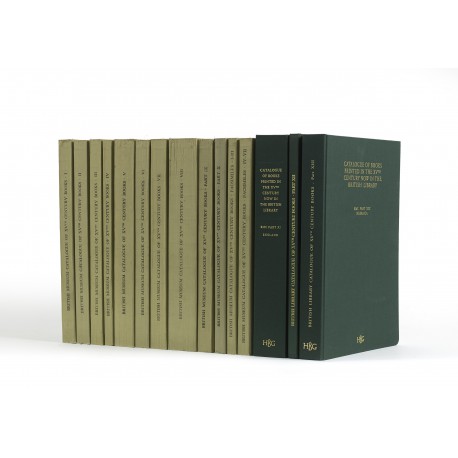 Complete set, providing descriptions of some 10,500 editions. “Every profession, it seems, possesses one supreme work of reference… unequalled by any other work in the same field. For incunabulists (indeed, for all bibliographers), there is the British Museum’s catalogue of incunabula” (from a review by Curt F. Bühler of volume IX, in The Book Collector, Winter 1962, p.489). “Perhaps no other collection of any type of book has had a catalogue that has become such a standard work in its field, used as much as an authoritative bibliography as a record of holdings (from a review by Martin Davies of volume XI in The Book Collector, Summer 2007, p.191). Parts I-VIII (10 volumes) are in the lithographic reprint issued in 1963; the remaining volumes in original editions. Vols. XI and XIII only are in print, each €1041 (www.brill.com; link). ¶ In fine state of preservation, virtually as new.