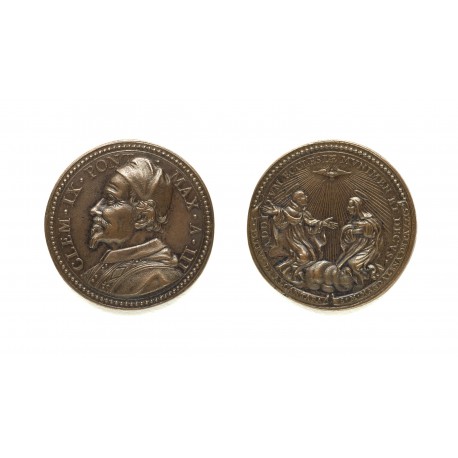 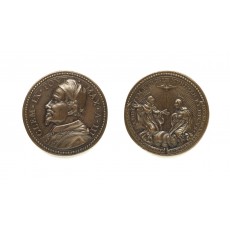 This medal commemorating the canonisation (28 April 1669) of the ecstatic mystics Peter of Alcantara (1499-1562), a Spanish Franciscan, and Maria Maddalena dei Pazzi (1566-1607), a Florentine Carmelite, was the annual medal of 1669. The most gifted artist of the day, Gianlorenzo Bernini, supplied the papal medallist, Gaspare Morone Mola, with a modello for the reverse; it is the only known occasion that Bernini was entrusted by Clement IX with design of a papal medal. Bernini did not choose to depict the rites in St. Peter’s, but to show the two Saints in direct communion with the Holy Spirit: “his play of opposites – male and female, active and passive – lends a characteristically baroque tension to the seemingly simple composition. Both iconographically and stylistically Bernini, through Morone as intermediary, has added a new dimension to the medallic repertory”. This superb example from the Michael Hall collection was exhibited in 1981 (Mount Holyoke College Museum of Art; then David and Alfred Smart Gallery, the University of Chicago; and University of Michigan Museum of Art).

exhibited Roma resurgens: papal medals from the Age of the Baroque, catalogue of an exhibition held at Mount Holyoke College Museum of Art, 4 March–26 April 1981, David and Alfred Smart Gallery, the University of Chicago, 1 July–9 August 1981, and the University of Michigan Museum of Art, 22 August–11 October 1981, by Nathan T. Whitman in collaboration with John L. Varriano (Ann Arbor, mi 1983), pp.131–132 no. 113 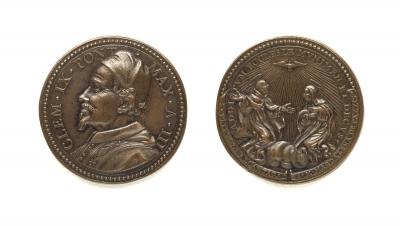 This medal commemorating the canonisation (28 April 1669) of the ecstatic mystics Peter of Alcantara (1499–1562), a Spanish Franciscan, and Maria Maddalena dei Pazzi (1566–1607), a Floren­tine Carmelite, was the annual medal of 1669. As usual, it was issued on 29 June, the feast day of Saints Peter and Paul. According to the account of papal expenses recorded in the series of ‘Mandati camerali’, Clement ix commissioned 264 examples struck in gold, 404 in silver, and an unspecified number in bronze.1

The medallist Gaspare Morone Mola was the nephew and namesake of Gaspare Mola, who had been master of the papal mint from 1625 until his death in 1640. He first worked for the Gonzaga at the mint in Mantua. By 1636 he had moved to Rome, where on 19 June a license was issued to ‘Gaspare Moroni orefice milanese’ permitting him to work as a gold­smith (his uncle stood as guaran­tor). Morone Mola served as an assistant to his un­cle until the latter’s death in January 1640, when he inherited his uncle’s valuable collection of dies, and succeeded him in the office of ‘maestro de ferri della Zecca’. He remained at the mint for nearly thirty years, executing medals and coins for all the popes from Urban viii through Clement ix.2

With rare exceptions, the papal medallist was re­sponsible for the artistic design of the medal as well as for the cutting and striking of the die. It was most unusual for other artists to furnish drawings for him to follow; when this occurred, the design was in­variably for the reverse, rather than the por­trait ob­verse. Popes themselves seldom became personally involved in the process. Fabio Chigi, Pope Alexander vii (1655–1667), who was said by the French ambassador in 1666 to be more con­cerned with his collections of medallions than with public affairs,3 was an exception. Deeply concerned with the production and design of medals, he built a new papal mint, and commissioned the most gifted artist of the day, Gianlorenzo Bernini, to supply designs.4

At the invitation of Alexander vii, Bernini supplied Morone Mola with modelli for a coin and five med­als.5 Two of these were medals representing works that Bernini had himself created: one commemo­rates con­struction of the church of S. Tommaso in Castel Gandolfo, in 1658;6 the other Bernini’s addi­tions to the Quirinal palace, in 1661.7 Although there is no graphic evi­dence of Bernini’s authorship of either medal, his involve­ment is otherwise proved. Auto­graph drawings exist for the coin and three other Alexandrine medals: the reverse of the annual medal of 1657 commemorating the cessation of the plague;8 the reverse and obverse of a silver scudo of Alexander vii, possibly issued to com­memorate the canonisa­tion of Saint Thomas of Villanova on 1 November 1658;9 the reverse of the annual medal of 1662 com­memorating the Cathedra Petri, struck four years before the unveiling of that monument;10 and the reverse of the annual medal of 1663 commemo­rating the Scala Regia.11

Our medal of 1669 for the canonisation of Saints Peter of Alcantara and Maria Maddalena dei Pazzi was the third of three annuali issued during Clement ix’s pontificate. It is the only known occasion that Bernini was entrusted by Clement ix with design of a papal medal. Two variant draw­ings by Bernini for the reverse of the medal have survived.12

Bernini did not choose to depict the rites in St. Peter’s, but to show the two Saints in direct communion with the Holy Spirit:

‘The two Saints, although linked composition­ally, seem totally unaware of each other and react to the Holy Spirit in different ways. Saint Peter throws his arms wide and his head upward as if to open himself fully to the divine light emanating from the dove. By contrast, Saint Maria Maddalena hum­bly bows her head and crosses her hands on her breast in a gesture of submis­sion reminiscent of the Virgin Annunciate. This play of opposites – male and female, active and passive – lends a character­istically baroque tension to the seemingly simple composition. Both icono­graphically and stylisti­cally Bernini, through Morone as inter­mediary, has added a new dimension to the medallic reper­tory.’13

Examples known to the writer include

4. The principal literature on Bernini as a medallist is cited by John Varriano, ‘Alexander vii, Bernini, and the Baroque Papal Medal’ in Studies in the History of Art, 21: Italian Medals, edited by J. Graham Pollard (Washington, dc 1987), p.260 (note 21).

5. Bernini collaborated with Gioacchino Francesco Travani, goldsmith and engraver at the papal mint, on three others: a medal commemorating the cessation of the plague, in 1657 (Effigies & ecstasies: Roman baroque sculpture and design in the age Bernini, catalogue of an exhibition, National Galleries of Scotland, Edinburgh 1998, pp.188–189 no. 166); and foundation medals for his two churches at Ariccia, in 1662 (Effigies & ecstasies, op. cit., pp.188–189 no. 90). Travani’s 1662 foundation medal for the Piazza del Popolo is ‘uncompromisingly Berninesque’, however no evidence has yet come to light proving that he had a hand in its design (Varriano, op. cit., p.259).