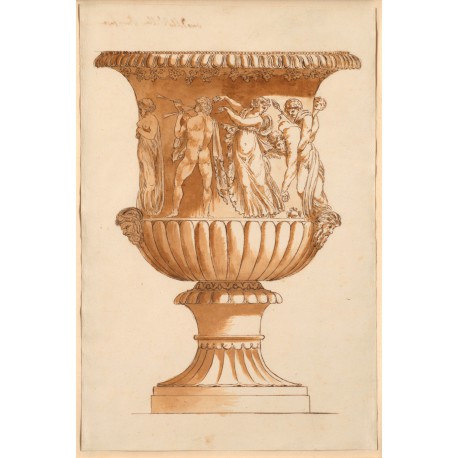 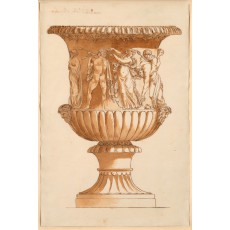 Study of the Borghese vase; Study of an antique vase from the Albani collection

These decorative drawings were extracted in 1990 from one of the two albums of “Drawings by Italian Old Masters. Sculpture” assembled circa 1871 by the Scottish antiquary Sir William Stirling Maxwell. The two albums contained mostly drawings commissioned by Cassiano dal Pozzo (1588-1637) for his celebrated “Museo Cartaceo”, a corpus of drawings of antiquities in Rome. After Cassiano’s death, the “Museo Cartaceo” was augmented by his younger brother, Carlo Antonio dal Pozzo, then by Cardinal Alessandro Albani, who incorporated drawings inherited from his uncle, Pope Clement XI, including a hoard accumulated by the artist Carlo Maratti. While our two drawings might have been introduced into the “Museo Cartaceo” by Carlo Antonio, before ill health brought his collecting to a halt in 1685, it is more likely that they were executed in the eighteenth century, and were added by Cardinal Albani. Both vases are drawn in mirror image of the originals, suggesting that they could be preparatory drawing for an unrealised suite of large-format engravings of Roman antiquities (they do not correspond to any known prints).

Study of the Borghese vase; Study of an antique vase from the Albani collection

(ii) Pen and brown ink with brown wash over black chalk, chalk rule lines at top and base of the vase, 407 × 267 mm. Watermark: fleur-de-lys within two concentric circles, letters A | C. Laid to a 19th-century wove paper mount sheet.

provenance [probably Cardinal Alessandro Albani (1692‒1779), kept in his palazzo ‘alle Quattro Fontane’ in Rome — within the Albani collection of prints and drawings, including the ‘Museo Cartaceo’, sold in 1762 to James Adam as agent for the Royal Librarian Richard Dalton — King George iii, kept in Buckingham House — among sheets of the ‘Museo Cartaceo’ appropriated by Dalton (1715‒1791) during a reorganisation of the drawings circa 1786‒1788 — presumably his deceased sale by Greenwood’s auction house, London, 11‒19 May 1791 — presumably the antiquary John MacGowan (died in 1803, Edinburgh), his deceased sale by Thomas Philipe’s auction house, London, 26 January‒4 February 1804 — presumably the antiquary Charles Townley (1737–1805) — by descent to John Townley, presumably his sale, Sotheby, Wilkinson and Hodge, London, 10‒11 May 1865, indirectly to] — Sir William Stirling Maxwell of Pollok (1818‒1878), and bound in an album entitled ‘Drawings by Italian Old Masters. Sculpture’ (fols. 2‒3) — by descent within the family — consigned for sale by Phillips, Son & Neale, ‘Old Master Drawings’, London, 12 December 1990, lots 219‒374 (these sheets offered as lot 220) — Private collection, Dublin

These decorative drawings were extracted in 1990 from one of the two albums of ‘Drawings by Italian Old Masters. Sculpture’ assembled circa 1871 by the Scottish antiquary Sir William Stirling Maxwell. Most of the drawings contained in these two albums had been commissioned by Cassiano dal Pozzo (1588‒1637) for his celebrated ‘Museo Cartaceo’, a corpus of drawings of antiquities in Rome. After Cassiano’s death the ‘Museo Cartaceo’ passed between his younger brother, Carlo Antonio dal Pozzo, Pope Clement XI, Cardinal Alessandro Albani, and in 1762 was sold to George III. When the Royal Librarian, Richard Dalton, reorganised the drawings, he extracted for himself more than 1000 sheets, and these came onto the market at Dalton’s deceased sale by Greenwood’s auction house (11‒19 May 1791), and eventually into the possession of Stirling Maxwell.

Cassiano’s ‘Museo Cartaceo’ had been substantially enriched by its successive owners, Carlo Antonio dal Pozzo (1606‒1689) and Cardinal Alessandro Albani (1692‒1779), the latter incorporating drawings inherited from his uncle, Pope Clement XI, including a hoard accumulated by the artist Carlo Maratti. While our two drawings might have been introduced into the ‘Museo Cartaceo’ by Carlo Antonio, before ill health brought his collecting to a halt in 1685, it is more likely that they were executed in the eighteenth century, and were added by Cardinal Albani. The paper evidence does not settle the issue: just one watermark can be seen, a fleur-de-lys within a double circle, accompanied by the letters A | C (in the sheet of the Albani vase). This mark has not been observed elsewhere; comparable marks, with different letters, are found in Italian papers manufactured from about 1660 to 1740. 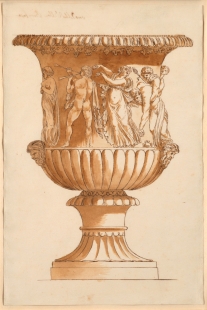 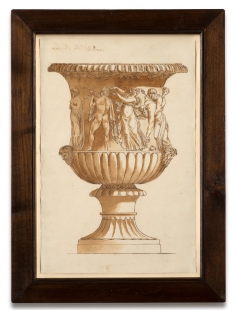 One drawing is inscribed on sheet verso ‘Vasa della Villa Borghese’ by an eighteenth century hand. The monumental Borghese vase had been excavated in the sixteenth century on the ancient site of the garden of Sallust, and by the mid-seventeenth century was one of the most admired of antique marble vases.1 The vase is here drawn in mirror image of the original, suggesting that it is a preparatory drawing for a print, or else a copy of a print.

The earliest known print of the Borghese vase is based on a drawing made by François Perrier during his second stay in Italy (late 1634‒1644) and published in 1645 in Perrier’s work devoted to Roman bas-reliefs.2 Perrier’s etching is in reverse of the original, however it is a continuous strip view of the frieze only, and not a source for our drawing. The vase afterwards was engraved by Georges Tournier (c. 1651), Pietro Santi Bartoli (c. 1680), an anonymous engraver (1700), and Francesco Aquila (1713); none of their prints corresponds to our drawing.3 The two drawings of the Borghese vase in the ‘Museo Cartaceo’ – British Museum, Franks I, fol. 123 (entire relief)4 and Windsor, Royal Library, III, fol. 9, 8332 (part of the relief)5 – also seem to be unrelated. 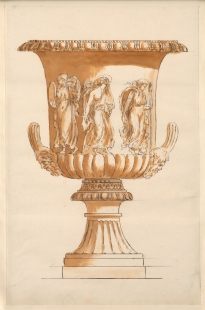 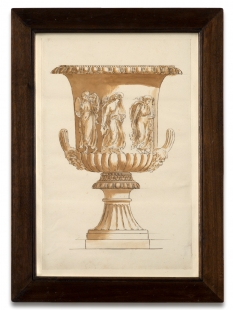 Our other drawing represents a marble bell vase then documented in the Albani collection and now in the Torlonia family collection.6 The drawing portrays one side of the vase, with three Kallimachian maenads, and handles in the form of bearded male heads. The vase is again drawn in mirror image of the original. A detail (the maenad with tympanum) had been sketched by the sculptor Pierre Jacques (1520‒1596) between 1572 and 1577.7 The only known print of this vase was engraved c. 1768‒1778 by Giovanni Battista Piranesi, and first distributed in 1778.8

Four other drawings in the Stirling Maxwell albums are attributable to the same anonymous draughtsman (SM, folios 4‒5). Depicting figures of the Victories arranging armour won by Domitian, the four drawings record fragments of the reliefs which typically decorated the ends of projections extending outwards from an entablature and supported by a column. Comparable reliefs discovered in the 1720s during systematic excavations of the Aula Regia of the Domus Flavia on the Palatine by Francesco Bianchini are documented in Bianchini’s Del Palazzo de’ Cesari: opera postuma (Verona 1738) and in G.B. Piranesi’s I Trofei di Ottaviano Augusto (Rome 1753).9 Two reliefs in the latter work, one shown by Piranesi in very weathered and battered state, match in content drawings by our anonymous draughtsman (SM, fol. 4 top and SM, fol. 5 top), and strengthen the supposition that he is recording fragments found on the Palatine Hill (Figs. 2 and 4, 5 and 7).10 A drawing by Piranesi of another fragmentary relief is quite close to one by our anonymous draughtsman (SM, fol. 4 bottom; Figs. 1, 3).11 Piranesi does not locate the object, however on another sheet, very similarly executed, and possibly from the same sketchbook, he records a lunette-shaped, unrestored Trajani relief then in the Albani collection.12 It could be that the four reliefs recorded by our anonymous draughtsman, like the marble bell vase, were once in the Albani collection. If this should be the case, then his drawings may date from the early-eighteenth century, and are late additions to the ‘Museo Cartaceo’. 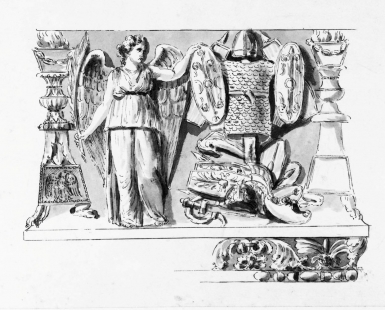 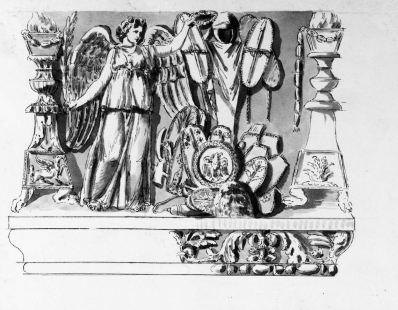 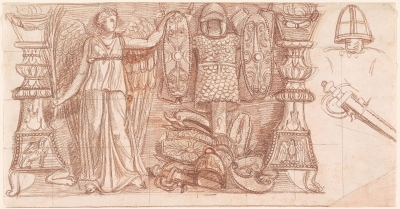 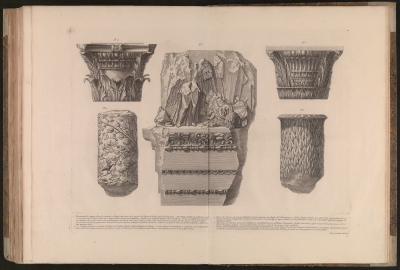 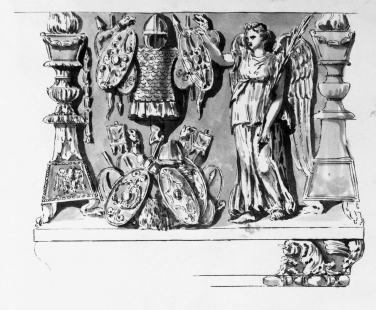 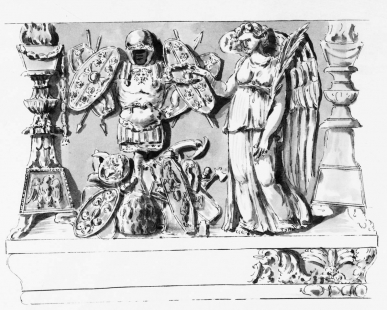 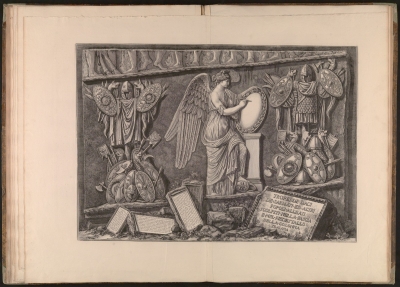 9. The excavations were promoted by Francesco Maria Farnese and many of the finds are kept today in the Farnese palace, in niches under the second porch. Peter Heinrich von Blanckenhagen, Flavische Architektur und ihre Dekoration (Berlin 1940), pp.64‒76 (esp. pp.65‒66).