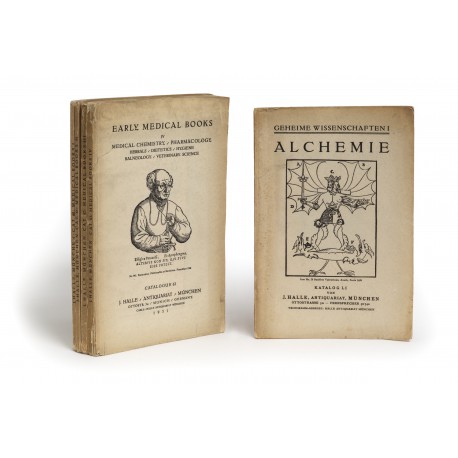 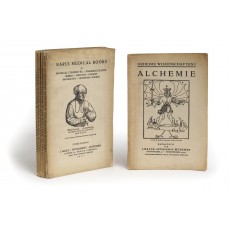 Four volumes (23.5 cm), set of four consecutively-paginated catalogues of medical books, as issued, in publisher’s printed wrappers. - The firm was founded in 1889 by Julius H. Halle and was continued after his death (aged 63, on 9 December 1927) by his widow Ida Halle; it was liquidated in 1935. The excellent descriptions were prepared by Ernst Schulte-Strathaus (1881-1968); the last catalogue may have involved Emil Offenbacher, who was apprenticed to the firm from 1931-1933. A projected fifth part offering “Portraits of eminent physicians” was abandoned; in its place, a catalogue with provisional title “V: Medicina occulta: Alchemy, Astrology, Physiognomics, Chiromancy, Magics, Miraculous cures, Mnemotechny” was scheduled, to be followed by “VI: Supplement, biographics, portraits: Index of the whole catalogue”. Neither ever appeared, and the series is complete in four parts as offered here.