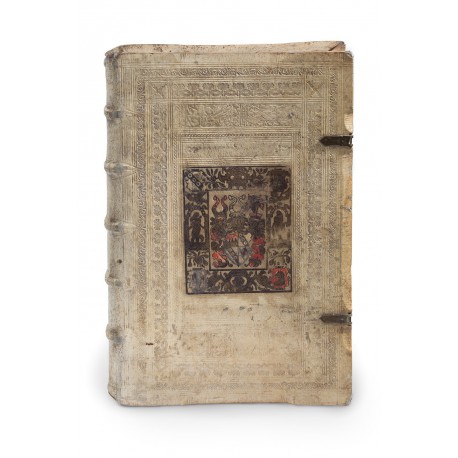 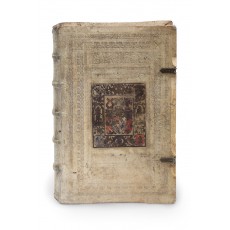 The approaching 400th anniversary of the death of the bibliophile Julius Echter von Mespelbrunn (18 March 1545–13 September 1617) provides the occasion for a note on the bindings supplied to his court library in Würzburg.1

Born at Schloß Mespelbrunn (Spessart), in Lower Franconia, Julius was the second son of Peter III Echter (1520–1576), a diplomat in the service of the Archbishop-Elector of Mainz, Kurmainzer Rat, and senior official in the neighbouring towns of Stadtprozelten and Dieburg, a cultured man, who possessed a library of more than 1700 volumes, including some in French and Italian.2Educated in Aschaffenburg, Würzburg, and Mainz, Julius matriculated in August 1558 at the newly-founded Jesuitengymnasium in Cologne, and thereafter commenced a peregrinatio academica taking him to universities in Mainz (1559–1561), Louvain (1561), Douai (1563), Paris (1566), Angers (1566), and Pavia, where in 1567 he was granted a licentia docendi in law.3

Julius returned to Würzburg in 1569, and in 1570 was elevated from canon of Würzburg to dean of the cathedral chapter; on 4 December 1573, aged twenty-eight, even before his ordination to the priesthood, he was appointed to the office of Prince-Bishop of Würzburg. As Fürstbischof, Julius Echter began a thorough ecclesiastical restoration, renovating schools, re-founding (in 1575–1576) the university of Würzburg, and rebuilding the Hofbibliothek of his predecessor, Friedrich von Wirsberg, which had been almost completely destroyed by fire on 22 February 1572. Over the next forty years, he collected in the court library more than a thousand volumes, mostly Roman and canon law, history, and Catholic theology, the great majority new books, obtained directly from their publishers, or at the Frankfurt book fair.4 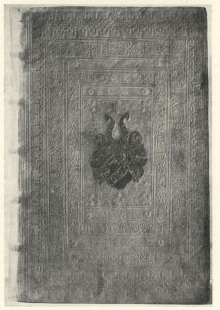 The Fürstbischof’s purchases were passed to a succession of bookbinders, some of whom are known by name.5The first was Gregor Schenk (Schenck), who had arrived in Würzburg from Zwickau after the death of the Hofbuchbinder Hans Rietzsch (28 January 1571), and taken over his materials.6Gregor Schenk’s bindings for Fürstbischof Echter followed a model that Rietzsch had established for Julius Echter during his tenure as Domherr (1570–1573): wooden boards, covered with alum-tawed pigskin, decorated by a large armorial supralibros, and with narrow rolls (Fig. 1).7 This supralibros (117 × 80 mm), centred on the upper cover, painted blue, displayed the Echter von Mespelbrunn arms (three rings), and was often accompanied by his initials (i e v m) and a date, blindstamped in panels above and below.8 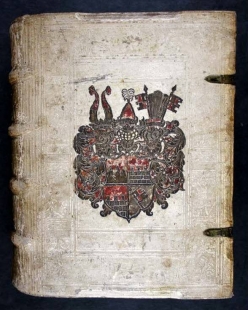 Similar decoration had been applied to bindings commissioned from Rietzsch by Fürstbischof Wirsberg (Fig. 2).9  On those, the Wirsberg family arms were quartered with charges representing the diocese, the ‘fränkischer Rechen’ and ‘Rennfähnlein’; the supralibros was usually coloured red and black (Fig. 2). Following his appointment as Prince-Bishop, Julius Echter required a new armorial block, quartering his personal arms with these symbols of Hochstift Würzburg. In 1574, a local silversmith and Formschneider, David Heyn, cut two metal dies for impression on the covers of Fürstbischof Echter’s bindings, one rectangular and the other round.10 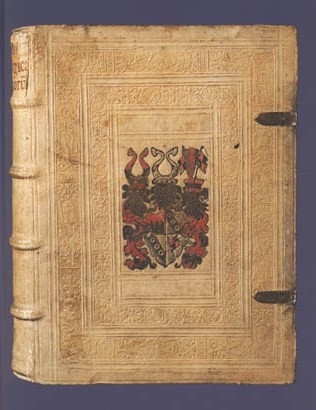 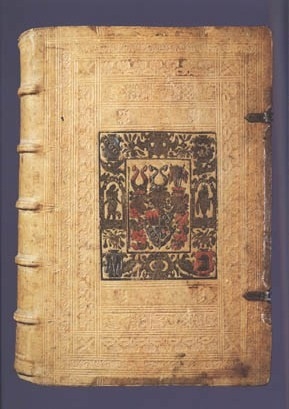 The rectangular version (76 × 54 mm) displays a single shield, on which the Echter von Mespelbrunn arms are duly quartered with the ‘Rechen’ and ‘Rennfähnlein’, and coloured in red and black (Fig. 3).11 This version was usually applied on books in quarto and smaller format. On larger books, the rectangular block was enclosed by a broad frame (122 × 99 mm; Fig. 4), incorporating standing figures of ‘Fides’ and ‘Justitia’, and (on individual escutcheons) the family and ancestral arms: Habern (two battle-axes), Adelsheim (a Steinbock horn), and Rüdt von Collenberg (a dog’s head).12 The frame was normally coloured black, and the insignia inside red, green and black. The circular die (diameter 93 mm) was applied on the very largest books; here, the family arms, the Franconian rake, and banner of the Prince-Bishopric appear on separate shields, which are enclosed by a laurel wreath embellished with the family and ancestral arms (Fig. 5).13 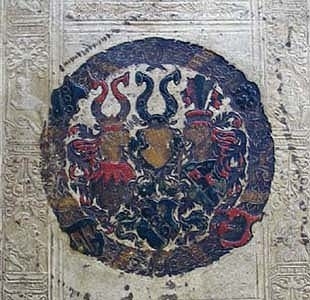 Gregor Schenk served as Hofbuchbinder in 1572–1574, in the latter year returning to Zwickau (he was again working in Würzburg, as Hofbuchbinder, from 1585–1588). At the commencement of his employment, possibly to show Fürstbischof Echter that he possessed the skills expected of a Hofbuchbinder, he produced one of the most extraordinary bindings of the German Renaissance, a circular binding (diameter 27 cm), covering five theological tracts (published at Antwerp, 1569–1570).14The calf binding is elaborately decorated in gilt by individual tools, and has the coloured insignia of Hochstift Würzburg, Echter von Mespelbrunn, Rüdt von Collenberg, Adelsheim, and Habern displayed on the page-edges. 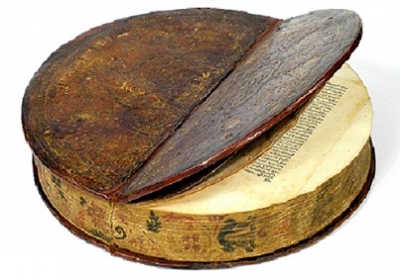 Schenk was succeeded as Hofbuchbinder by Georg Freyberger (Jörg Freiberger) of Mainz.15Freyberger employed the two arms blocks and the Fides-Justitia frame, which he often combined with his own rolls (one signed gf). In Mainz, Freyberger had produced some bindings with green-stained pages edges, gauffered in gilt with the title of the book, the Jesuit monogram (i h s), and year of binding,16and in 1576 Freyberger initiated this practice in Würzburg. The larger volumes he bound for Fürstbischof Echter received green (or blue-) stained fore-edges, gauffered in gold with Julius’s name (Julius Dei Gratia Episcopus Wirtzburgensis Ac Franconiae Orientalis Dux), the title of the book, and date of binding (Figs. 7/a-d). In 1577–1578, some remnants of Fürstbischof Wirsberg’s library were revamped to match, their fore-edges likewise stained and gauffered with the title of the book and date of binding (1577 or 1578), but without Julius’s name.17 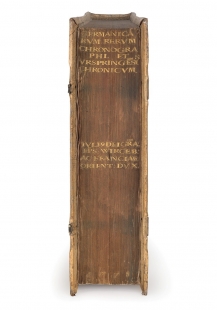 The most prolific of the known binders working for Fürstbischof Echter was Jakob Preisger (Preisskorn) of Dippoldiswalde (Dresden).22He is recorded in Würzburg in 1576 and as working for Julius Echter in 1578, 1580–1585, and again from 1590 until 1594, though he never was appointed Hofbuchbinder. Preisger had access to the two armorial blocks and frame, which he used in combination with his own rolls (one signed ip), and with ‘Justitia’, ‘Caritas’, ‘Crucifixion’ and ‘Sanctus Kilianus’ panels. Other binders working intermittently for Julius Echter were Hans Herolt (Heroldt)23 and Hans Weiß of Naumburg (1578–1580).24The binders working for Fürstbischof Echter during the last twenty years of his life (c. 1597–1617) have yet to be identified. With the exception of one volume, a copy of the Missale Herbipolense (Würzburg: Conradus Schwindtlauff, 1613), the so-called ‘Julius-Missale’, no book decorated by his supralibros is known,25 and it would seem that the books acquired for the Hofbibliothek in these years are lost, or else unidentifiable.26

The impressive display of the books in the Hofbibliothek inspired Johann Wilhelm Gantzhorn (1541–1609), Rektor und Prokanzler of the university of Würzburg from 1593 to 1596, to commission similar bindings, decorated with his armorial supralibros on covers, and the title of the book and his name gauffered in gilt letters on the dark-stained fore-edge. Very little is known about Gantzhorn’s library, now widely dispersed, with volumes recorded in Australia,27 Germany,28and Greece.29

The Hofbibliothek of Julius Echter is also now widely dispersed. Würzburg was one of the cities overrun in October 1631 by the Protestant army of Gustavus Adolphus; its libraries were looted, and the Hofbibliothek, as well as portions of the university library and the library of the local Jesuit community, were carried away to Sweden.30Estimates of the number of books taken vary, however it seems that at least 1000 volumes from Julius Echter’s Hofbibliothek were transferred. The books were presented by Gustavus Adolphus to the university library in Uppsala, where they were reviewed by Johannes Matthiae Gothus, professor at the university, later head chaplain at the court, tutor to Queen Christina, and Bishop of Strängnäs, who discarded a large number as duplicates (approximately 587 volumes were retained by the university).31

In 1631, Matthiae had befriended the Scottish ecumenist John Dury (Durie), and when Dury came to Sweden in 1636–1638 to promote Protestant unity, the two men became close. Dury is a possible conduit through which about 250 books from the Würzburg Hofbibliothek found their way to England.32Among the thirty-eight eminent Puritan divines who had sponsored Dury’s trip was Richard Holdsworth (1590–1649), Master of Emmanuel College, Cambridge, and a voracious bibliophile. Holdsworth bestowed his vast library33to the University, and subsequent research has identified there some 160 Julius Echter bindings, of which ‘Holdsworth had some thirty’.34Dury (1596–1680) was subsequently deputy keeper (under Bulstrode Whitelocke) of St James’s Library, the former royal library.

Additional books from Würzburg Hofbibliothek arrived in Cambridge libraries from other collectors, including Peter Gunning (1614–1684), Master of St John’s, who bequeathed a volume bearing Julius Echter’s insignia to his College; and John Colbatch (1664–1748) of Trinity, who bequeathed three such volumes (now in the University Library).35Most of Julius Echter’s books at Cambridge are in standard pigskin bindings, however at least one is bound in vellum with his arms painted on the upper cover (image).36

A Cambridge bookbinder, John Houlden the Younger, who worked in Cambridge from about 1637 until 1665, seems to have been inspired by Julius Echter’s bindings. In 1655–1656, Houlden bound for the University a four-volume set of Antonius Giggeius, Thesaurus linguæ Arabicæ (Milan 1632) and a copy of Dugdale’s Antiquities of Warwickshire (London 1656). The page-edges of these volumes were stained blue, and their fore-edges gauffered in gold with their titles. Around the same date, the University received from an unnamed binder (most probably Houlden) a copy of Dugdale’s Monasticon Anglicanum (London 1655); its fore-edge was gauffered monasticon | anglicanvm | ex dono | clarissimi | avthoris | gvlielmi dvgdale | 1655. J.C.T. Oates believed it ‘probable’ ‘that Echter’s gauffered titles were Houlden’s direct model and inspiration’.37A decade later, when the University finally took possession of Richard Holdworth’s library, Houlden was engaged ‘for severall weekes’ ‘in removing from place to place, and ordering Dr Holdsworth’s Bookes according to Direction in the University Library’.38A possible explanation for this employment might be long-standing acquaintance with Holdsworth’s books.

Books from the Würzburg Hofbibliothek adorned by Julius Echter’s supralibros and with gauffered fore-edges are found in Oxford libraries;39in the British Library;40in the Wellcome Library;41in the National Art Library, Victoria & Albert Museum;42 and in Dublin.43

Some 43 of Julius Echter’s bindings are in Universitätsbibliothek Würzburg;44another two are in Mainfränkische Museum Würzburg.45Eight bindings in Berlin46and others in Bensheim,47Cologne,48Mainz,49and Schweinfurt50are published; additional volumes in Bamberg, Gießen, Leipzig, Nuremberg can be located through the Einbanddatenbank. The books from Julius Echter’s private library and from the Hofbibliothek once preserved in Gotha have mostly disappeared; however, some can located through the opac of the Universitäts- und Forschungsbibliothek Erfurt/Gotha. Four bindings are on the database of digitised images of bindings in the Bibliothèque Sainte-Geneviève in Paris;51at least five are in the Bibliothèque Mazarine;52and one in the Bibliothèque de la Sorbonne has been published.53The bindings in Swedish libraries mostly await full documentation: just two, in Uppsala Universitetsbibliotek, are at present recorded by the ProBok provenance database.54 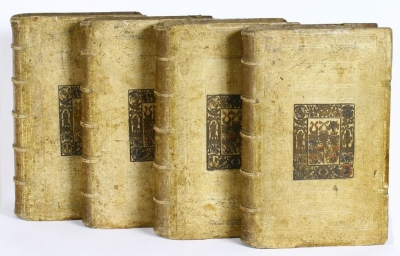 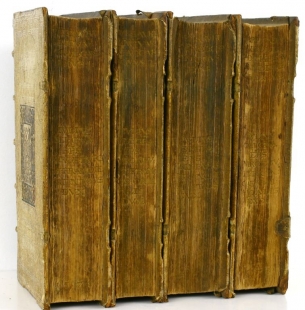 In 2008, a set of the five-volume Henri Estienne, Thesaurus graecae linguae ([Geneva] 1572), uniformly bound by Jakob Preisger, the fore-edges gauffered: iulus dei gra eps wirceburg ac franciae orientalis dux 1573, came to the market in Paris (Figs. 8–9). The set, inscribed by Christopher Dahl (1758–1809), professor of Greek, rector of the University of Uppsala (1792), had been acquired by Charles Gillot (1853–1903), and passed from his library into the possession of Louise-Marcelle Gillot-Seure, and Georges Seure (1873–1944).58 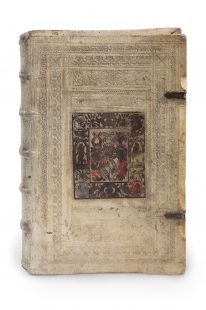 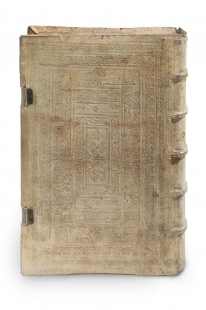 43. Dublin, Marsh’s Library (opac): Francesco Filelfo, Epistolarum D. Francisci Philelphi … unus et viginti libri reliqui (Paris 1503), a Preisger binding, decorated by Echter’s rectangular supralibros (without frame). Mirjam Foot, The decorated bindings in Marsh’s library, Dublin (Aldershot 2004), pp.115–116: ‘The arms panel is impressed through (now oxidised) “Zwischgold”, a metal foil, popular in German-speaking areas of Europe, made by beating a very thin layer of gold over a supporting layer of silver foil, an economy measure that time has shown up. The arms have been embellished further with red, green and blue paint… The edges of the leaves have been stained green’. Foot’s description does not mention a gauffered fore-edge.

55. Thomas Beauxamis, Homiliae in omnia quae perquadragesimam leguntur Evangelia (Paris 1503); offered by Bloomsbury Book Auctions, ‘Catalogue of early printed books many in interesting bindings and including examples from more than 150 presses of the 15th century: the property of a continental collector [Conrad, Graf Reuttner-Weyl, 1908–1969], and other properties’, 31 October–1 November 1985, lot 259 (£350).