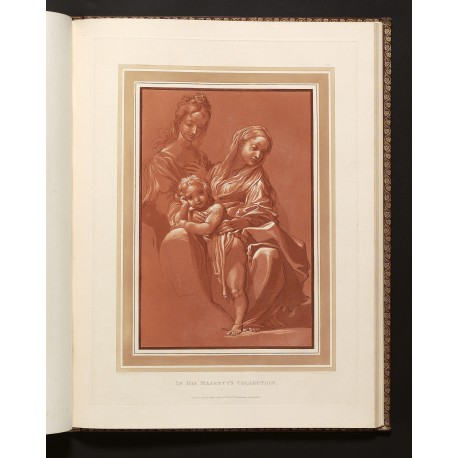 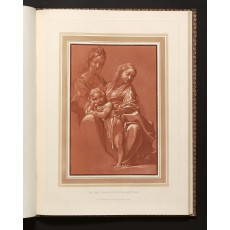 Original designs of the most celebrated masters of the Bolognese, Roman, Florentine, and Venetian schools; comprising some of the works of Leonardo da Vinci, the Caracci, Claude Lorraine, Raphael, Michael Angelo, the Poussins, and others, in His Majesty’s collection; engraved by Bartolozzi, P.W. Tomkins, Schiavonetti, Lewis, and other eminent engravers; with biographical and historical sketches of L. da Vinci and the Caracci

A fine series of prints reproducing Italian drawings in the Royal Collection, selected by John Chamberlaine, the King’s Keeper of Drawings and Medals. The drawings are mostly reproduced in their actual size and a variety of techniques are employed to render them faithfully, including stipple, aquatint, roulette, and soft ground etching; to compound the effect, some drawings are printed on tinted papers.

We are replying to messages, however the office is temporarly closed for vacation. We will resume shipping books in mid-August..
pdf (4.32 MB)
Print

Original designs of the most celebrated masters of the Bolognese, Roman, Florentine, and Venetian schools; comprising some of the works of Leonardo da Vinci, the Caracci, Claude Lorraine, Raphael, Michael Angelo, the Poussins, and others, in His Majesty’s collection; engraved by Bartolozzi, P.W. Tomkins, Schiavonetti, Lewis, and other eminent engravers; with bio­graphical and historical sketches of L. da Vinci and the Caracci.

i: (9) ff. letterpress, unsigned: title-page (transcribed above); dedication, To the King; part-title, Imita­tions of Original Designs by Leonardo da Vinci…, dated 1796; 5 ff. text, Leonardo da Vinci, including an account of the provenance of the drawings (paginated 3–12); and list of plates, Contents (enumer­ating sixty-six subjects); plus seventeen engraved plates on fifteen leaves (reproductions in colour of drawings by Leonardo) numbered (i–v) vii–xvii (with x/xi, xv/xvi on single sheets).

ii: (4) ff. letterpress, unsigned: part-title, Engravings from the Original Designs of Annibale, Agostino, Ludovico Caracci…, dated 1797; and 3 ff. text, The Caraccis (paginated 1–5); plus engraved dedica­tion-plate (To her Serene Highness the Princess of Wurtemberg…, lettered by [Thomas] Merrifield and engraved by P.W. Tomkins) and forty-nine subjects engraved on forty-three leaves (reproductions in colour of drawings by the Carracci and others), imperfectly numbered xviii–lxvi (with xxxiii–xxxiv, xxxvi–xxxvii, xxxix–xl, xliv–xlv, liii–liv, lx–lxi on single sheets).

A fine series of prints reproducing Italian drawings in the Royal Collection, selected by John Chamberlaine, the King’s Keeper of Drawings and Medals. The drawings are mostly reproduced in their actual size and a variety of techniques are employed to render them faithfully, including stipple, aquatint, roulette, and soft ground etching; to compound the effect, some drawings are printed on tinted papers.

Soon after his appointment in February 1791, Chamberlaine inaugurated three publications, each reproducing ‘in facsimile’ drawings in the Royal Collection. The first and best-known of these works is the suite of eighty-four prints after Holbein portraits of members of the court of Henry viii, issued seriatim between March 1792 and June 1800.1 The present volume collects Chamberlaine’s next two series: one reproducing drawings by Leonardo da Vinci, issued between September 1795 and October 1806; the other reproducing drawings by the Carracci, and by Baccio Bandinelli, Canaletto, Claude Lorrain, Gaspard Dughet, Leonardo, Michelangelo, Nicolas Poussin, and Harman van Swanevelt, issued between April 1796 and April 1811. The same team of engravers was employed on all three pro­jects: Francesco Bartolozzi, his pupils, or artists associated with him; the same printer printed the letterpress in all three works: William Bulmer; and the same bookseller and publisher conducted the sales: George Nicol, holder of the Royal warrant.

In his Imitations of original drawings by Hans Holbein, Chamberlaine had credited George Nicol (together with Horace Walpole) with ‘concerting… the plan of this publication’. It is likely that Nicol was also the chief promoter of a reprint of the Holbein series in reduced format, which appeared shortly after Chamberlaine’s death (12 January 1812),2 and of this reissue of the Leonardo and Carracci series published in the same year. 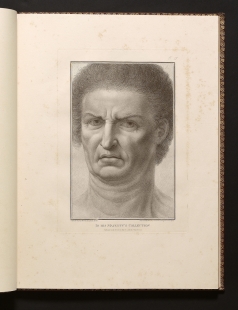 Judging by the title, printed in 1796 and reissued in 1812, Chamberlaine’s original intention was to reproduce a wide variety of Leonardo’s drawings: Imitations of original designs by Leonardo da Vinci, consisting of various drawings of single figures, heads, compositions, horses and other animals; optics, perspective, gunnery, hydraulics, mechanics; and in par­ticular of very accurate delineations, with a most spirited pen, of a variety of anatomical subjects, in His Majesty’s collection. The first fascicule of the series, distributed in October 1796, contained six plates etched by Francesco Bartolozzi, of which two were reproduc­tions of Leonardo’s anatomical studies.3 Another seven plates were completed in 1796 (a head, a three-quarter length study of a man, and five anatomical subjects), after which Chamberlaine laid the project aside, until October 1806, when subscribers received nine plates (reproducing eleven drawings), and the publication was discontinued.

The reasons for the decade-long interval and termination of the work are not obvious; how­ever, distaste for the anatomical plates (one showed coition with a detail of the penis) may have been a factor.4 The Contents list printed for our 1812 reissue calls for seventeen prints after Leonardo, depicting human heads and figures, and the courtyard of a foundry, and eliminating all the anatomical plates:5 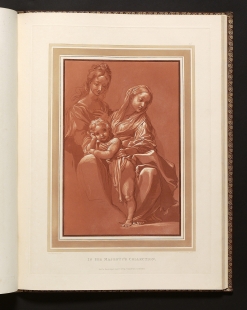 Image
‘Virgin and Child and St. Anne’ by ‘A. Caracci’ (Wittkower 65, as ‘Virgin and Child with St. Catherine’, a contemporary copy of a lost drawing by Lodovico Carracci). Etching and aquatint by Luigi Schiavonetti (pl. xxvi)

Chamberlaine had meanwhile commenced work on a series of reproductions of drawings by other Italian artists in the Royal Collection: Engravings from the original designs of Annibale, Agostino, and Ludovico Caracci, in His Majesty’s Collection. Consisting of ele­gant compositions and studies for the various celebrated pictures in the different palaces and cabinets at Rome, Bologna, Parma, Milan, &c. Between April 1796 and April 1797, Bartolozzi reproduced seven drawings by the Carracci.7 Work was afterwards suspended, until May 1806, when Chamberlaine published a single print by Tomkins after a drawing by Lodovico Carracci. Six more plates after drawings by the Carracci were published in 1807, engraved by Bartolozzi, Tomkins, Luigi Schiavonetti (1765–1810), Georg Siegmund Facius (circa 1750–after 1815), and James Stephanoff (circa 1786–1874), raising to four­teen the number of their drawings reproduced (order of plates in 1812 rearrangement): 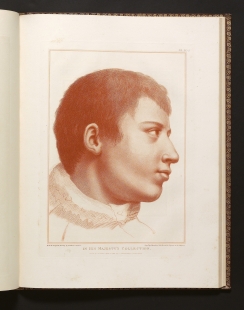 Engraving by Bartolozzi of a ‘Young Man in profile’, from a series of academic studies of heads in red chalk (Wittkower 575, as possibly by Sisto Badalocchio) (pl. xxix)

In 1807, a new artist was introduced in the series, as an ‘honorary Roman’: Claude Lorrain. Ten plates reproducing Claude’s drawings were engraved in that year by Frederick Christian Lewis (1779–1856), George Robert Lewis (1782–1871), and Tomkins; six more plates of Claude’s drawings were published in 1809, and three in 1811, for a total of nine­teen, all but one of the genuine drawings by him in the Royal Collection (order of plates in 1812 rearrangement):

Most copies of the 1812 edition contain sixty-six engraved subjects printed on fifty-eight folios, as enumerated in the list of ‘Contents’, and have the text ‘Leonardo da Vinci’ printed on five leaves (pagi­nated 3–12).20 These variations are known:

■ 73 engraved subjects printed on 65 folios: the usual 66 subjects on 58 folios, plus seven ‘supplementary’ anatomical plates; and an additional leaf of letterpress transcribing and translating Leonardo’s ‘mirror writing’ on the anatomical plates (paginated 13–14)21

■ 68 engraved subjects printed on 60 folios: the usual 66 subjects on 58 folios, plus two of the seven anatomical plates; and the additional leaf of letterpress (paginated 13–14)22

■ 67 engraved sub­jects printed on 59 leaves: the usual 66 subjects on 58 folios, plus a print after Guido Reni (not included in the contents list);23 without the letterpress title-pages Imitations of original designs by Leonardo da Vinci (1796) and Engravings from the original designs of Annibale, Agostino, and Ludovico Caracci, in His Majesty’s Collection (1797), without text Leonardo da Vinci (5 ff., pp.3–12)24 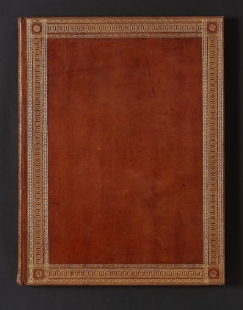 Our copy is in a fine binding of russia leather decorated in gilt by a broad roll and signed with the ticket of the Mannheim bookbinder, Franz Sebastian Voll (1783–1846). Born in Würzburg, Voll was admitted to the guild of binders in Mannheim in 1807.25 His clients included the princely house of Fürstenberg,26 Grand-Duchess Stephanie von Baden,27 and perhaps Ernst August i, King of Hannover.28

2. Portraits of illustrious personages of the court of Henry viii. Engraved in imitation of the original drawings of Hans Holbein (London 1812). On his deathbed (4 January 1812), Chamberlaine sent to the Prince Regent two of the Holbein portraits re-engraved in smaller size, seeking permission to dedicate the new edition to h.r.h.; see The Correspondence of George, Prince of Wales, 1770–1812, edited by Arthur Aspinall (London 1971), viii, pp.323–324 no. 3316. Permission was granted; the printed dedi­cation, however, was antedated 20 December 1811. Anthony Dyson, ‘The Engraving and Printing of the “Holbein Heads”’ in The Library: Transactions of the Bibliographical Society, sixth series, 5 (1983), pp.223–236 (dedication reproduced p.224 fig. 1b).

3. Review in The British Critic, 8 (October 1796), pp.419–420: ‘It contains first the characteristic head of Leonardo, sketched by himself, and engraved, in the most exquisite manner, by Bartolozzi. There are, besides, two heads, a plate of mechanics, two plates of anatomical subjects, with the author’s notes etched on the plates, so as to form a facsimile of the original manuscript, to which an English transla­tion is subjoined.’ Cf. The Monthly review, or, Literary journal (February 1798), pp.233–234.

7. The first fascicule, distributed in February 1798, apparently contained six of these prints; see the Monthly Review; or Literary Journal 25 (February 1798), p.235: ‘…we are now to announce the pub­lication of the first number of the Florentine and Venetian schools, which contains six plates from the designs of the Caracci, consisting of the portrait of Annibal Caracci, three compositions, viz. Abraham entertaining the Angels, Jacob’s Vision, the Birth of Pyrrhus, and two heads as large as life by Annibal Caracci, studies for some of his great pictures. There is also a pleasing biographical sketch of the family of the Caracci.’

9. Rudolf Wittkower, The Drawings of the Carracci in the collection of Her Majesty the Queen at Windsor Castle (London 1952).

10. Edmund Schilling, The German drawings in the collection of Her Majesty the Queen at Windsor Castle [and] Supplements to the catalogues of Italian and French drawings, with a history of the Royal Collection of Drawings, by Anthony Blunt (London 1971), p.68.

12. Anthony Blunt, The French drawings in the collection of His Majesty the King at Windsor Castle (Oxford 1945), pp.21–24; Marcel Roethlisberger, Claude Lorrain: the drawings (Berkeley 1968), passim.

13. The Monthly magazine; or, British Register 27 (no. 181, 1 February 1809), p.55: ‘List of New Publica­tions in January’: ‘Engravings from original Designs, by Da Vinci, the Caraccis, Claude, the Poussins, Raphael, &c. By John Chamberlaine, keeper of the King’s drawings and medals, No. vi. 21.2s’. The publication apparently was completed in ‘eight numbers’, however the dates of issue and constituents of each number are uncertain. Cf. W.T. Lowndes, The Bibliographer’s Manual of English Literature (London 1834), i, p.378: ‘Engravings from the Designs of Leonardo da Vinci, Raphael, N. Poussin, Caracci, Claude, Michael Angelo. London, 1797. &c. imp. folio, complete in 8 nos. 2[£]. 2s. each’.

14. A.E. Popham and Johannes Wilde, The Italian Drawings of the xv and xvi Centuries… at Windsor Castle (London 1949).

18. Karl Theodore Parker, The drawings of Antonio Canaletto in the collection of His Majesty the King at Windsor Castle (Oxford 1948).

19. Christopher White and Charlotte Crawley, The Dutch and Flemish drawings of the fifteenth to the early nineteenth centuries in the collection of Her Majesty the Queen at Windsor Castle (Cambridge 1994), p.328.

28. A copy of John Smith, Select views in Italy, with topographical and historical descriptions in English and French (London 1792–1796), bound by Voll for Ernst August i, was in the Feltrinelli sale (Christie’s, ‘The Giannalisa Feltrinelli library’, London, 3 December 1997, lot 359).