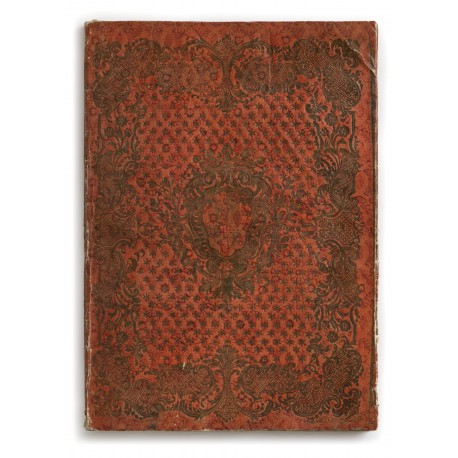 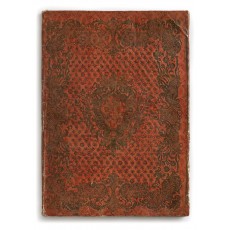 A sumptuous publication commemorating the election in 1763 of Ludovico Manin as one of nine Procuratori di San Marco, responsible for the administration of the sestieri “de ultra canalem” (Dorsoduro, Santa Croce, and San Polo). This was a high office, carrying life tenure, second in prestige only to that of the Doge. By the mid-18th century, it had become fashionable for the Venetian nobility to publish on these occasions a souvenir for guests, containing the texts of the canzoni, madrigals, and sonnets, epistles, or orations, performed or delivered at the ceremony. The 1763 Manin ingresso is considered to be the finest all such “presentation books”, “an epitome of magnificence and invention” and “one of the greatest illustrated books of its period” (Andrew Robison). It features a delightful set of page frames, head- and tail-pieces, designed and engraved by Francesco Bartolozzi, and elegantly composed and printed by Giovanni Battista Albrizzi (1698-1777), the most distinguished publisher in Venice. Our copy is bound in rose-coloured carte remondiniane, the covers block-printed in gold with the Manin family insignia centred in a design which mirrors Bartolozzi’s decoration within. Eight other copies in similar “presentation bindings” are known to survive.

bound in contemporary pasteboards, over-covered by a sheet of patterned rose-coloured paste-paper, block-printed in gold with broad woodcut frames incorporating foliage and shell ornament, enclosing a semé of stars and escutcheons bearing the armorial insignia of Ludovico Manin (upper cover) and family monogram (lower cover). Preserved in a morocco-backed box.

This beautiful publication commemorates the election in 1763 of Ludovico Manin (1726-1802) as one of nine Procuratori di San Marco, responsible for the administration of the sestieri ‘de ultra canalem’ (Dorsoduro, Santa Croce, and San Polo). This was a high office, carrying life tenure, second in prestige only to that of the Doge. From the ranks of the Procuracy the Doge was usually chosen, and on 9 March 1789 Ludovico Manin was elected Doge on the first ballot. He was the last Doge of Venice, governing until 1797, when he was forced to abdicate by Napoleon Bonaparte.

The Venetian nobility of Ludovico Manin’s generation marked special occasions – a betrothal or a marriage, election to public office, the entry of a son or daughter into a religious order – with elaborate festivities, including concerts, cantatas, serenatas, recitations of laudatory poems and orations. A souvenir of the occasion often was presented to guests in the shape of a pretty, slender book, in which the texts of the canzoni, madrigals, and sonnets, epistles, or orations, were preserved. By the middle of the eighteenth century, these keepsakes had evolved into sumptuous books, adorned with engraved portraits and allegorical vignettes, each page of text enlivened by an engraved frame.1

The rich Manin family from Friuli chose Giovanni Battista Albrizzi (1698-1777), the most distinguished publisher in Venice, to print three souvenirs of Ludovico’s ingresso into the august ranks of the Procurators of San Marco.2 Our book is ‘by far the grandest’ of these three, ‘widely agreed to be the finest example of what may be called “presentation books”’, ‘an epitome of magnificence and invention’ and ‘one of the greatest illustrated books of its period’.3 It contains a dedication in verse by Conte Gasparo Gozzi (1713-1786) and contributions from some thirty-five authors,4 including ‘Canzone a sua eccellenza Elisabetta Grimani procuratessa Manino’ by Cristina Roccati (1734-1814)5 and sonnets by Camilla Solar d’Asti Fenaroli (1723-1769).6 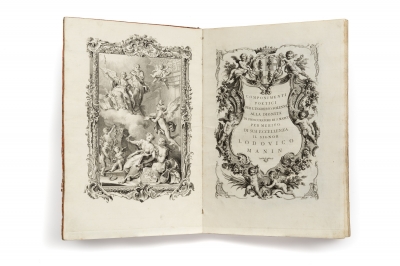 Albrizzi’s publications were especially noted for their engraved ornaments and vignettes, often designed by the finest Venetian engravers. His first books to have engraved borders decorating every page were the 1746 nozze Marc’Antonio Grimani‒Maria Pisani and 1753 ingresso Luigi Pisani; in both, frames designed by Giovanni Battista Piazzetta are repeated throughout.7 Albrizzi’s next such book was the 1763 ingresso Gian Francesco Pisani. For this, the Florentine printmaker Francesco Bartolozzi (1727-1815), resident in Venice since 1748, designed and engraved a set of twenty page borders, employed in pairs, each pair printed four times.8 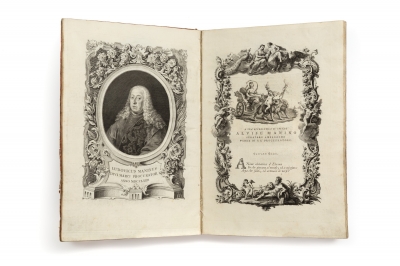 Albrizzi engaged Bartolozzi again for the 1764 ingresso Ludovico Manin, commissioning a new set of twenty engraved page frames. These were used together with the earlier set, so that each border now appeared only twice.9 Bartolozzi also produced for the new publication a frontispiece, title-plate, portrait, and six vignettes (head- and tail-pieces).10 ‘Together with the Ingresso for Gian Francesco Pisani (1763), this book stands as the ideal synthesis of Bartolozzi’s extraordinary technical and stylistic virtuosity in book decoration’.11

Our copy is preserved in its original ‘presentation binding’ of rose-coloured carte remondiniane, the covers block-printed in gold with a design in the same taste as the decoration within, to ‘suggest the sumptuous character of rich contemporary gold-tooling on leather bindings’.12 The copy was first cased in bare boards, then over-covered with a sheet of paste-paper which had been coloured to look like cloth or leather and block-printed.13 The entire cover was printed from a single, large woodblock. Two frames were cut in the block, with slight variations in cutting: one frame encloses an escutcheon bearing the Manin arms (upper cover); the other an escutcheon displaying the family monogram (lower cover). Separating the two frames is a column of alternating diamond and star ornaments (cover spine). 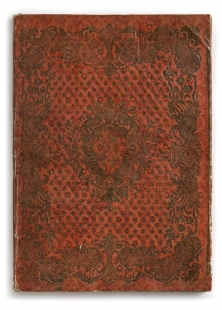 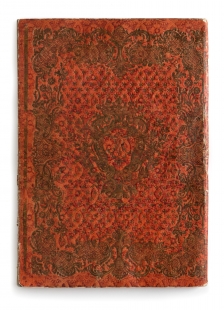 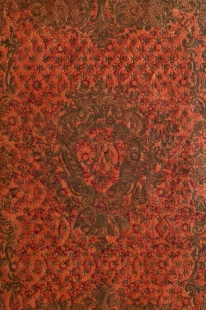 The earliest known binding of this type covers the 1757 ingresso Lorenzo Morosini as Procuratore (printed by Antonio Zatta), where however the design is achieved from an etched and engraved copperplate.14 Some copies of the 1763 ingresso Gian Francesco Pisani (printed by G.B. Albrizzi) are in comparable bindings, in this instance with the design printed from a woodblock.15 The woodblock used the following year for the covers of Albrizzi’s ingresso Ludovico Manin is cut in a still more pronouncedly rococo style. A semé of stars is incorporated and the covers of the new binding now harmonise perfectly with the page frames and other engraved decoration within.16 No subsequent use of the woodblock has been observed. Reduced copies were used to decorate the covers of Albrizzi’s other 1764 presentation book for Manin17 and on Albrizzi’s 1764 nozze Barbaro-Barbarigo, in the latter instance with the Barbaro arms and monogram displayed on the escutcheons.18 The great majority of extant copies of all these books are in ordinary paper bindings, or otherwise bound.

These other copies in paper covers featuring the Manin arms are recorded:

No copies once owned by members the Manin family have been identified.27

11. Giorgio Marini, in The glory of Venice: art in the eighteenth century, catalogue for an exhibition held at the Royal Academy of Arts, London, 1994, and National Gallery of Art, Washington, 1995, edited by Jane Martineau and Andrew Robison (New Haven & London 1994), p.428 no. 245.

15. See Robison, op. cit. (1991), p.256 (printed in gold from a woodblock, on ‘delicate rose-coloured paper that had been previously paste-printed with a slightly darker version of the same color, in a pattern of abstract flowers set into leaf-formed diamonds’). The Morgan Library copy, PML 62048, is bound in ‘turquoise paste-paper with gilt-blocked Pisani arms’ (catalogue).

16. I am indebted to Andrew Robison for observations about the transformation in style from the 1763 ingresso Pisani to the 1764 ingresso Manin (private communications to the writer, 27 January 2016 and 23 February 2016).

23. ‘Original purple blind-stamped boards, with the Manin arms to center of upper board’. Acquired by the Library of Congress from Susanne Schulz-Falster Rare Books, ‘A collection of Venetian presentation books’, London [2007], item 5 (entry).

24. ‘Original printed wrappers, the sides entirely covered with stamped designs and in the centre the Manin arms’. Copy exhibited in The Italian book, 1465-1900: catalogue of an exhibition held at the National Book League and the Italian Institute, January to March 1953 (London 1953), p.54 no. 136.