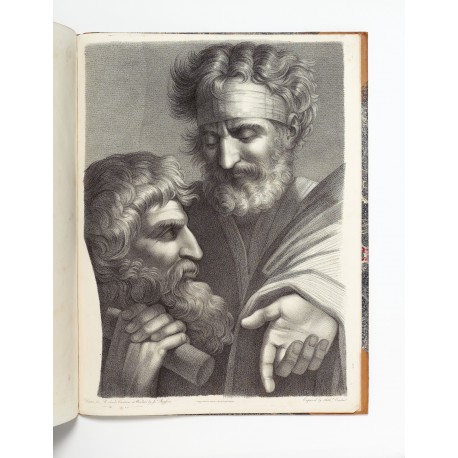 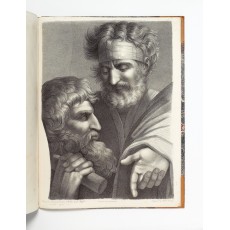 Essays after the Cartoons of Raphael at Windsor Drawn by the gracious Permission of His Majesty and by Permission most humbly Inscribed to Her Majesty the Queen of Great Britain By Her Majesty’s most Grateful Devoted Servant J. Ruyssen

Extremely rare set of fifteen prints reproducing in actual size heads in Raphael’s cartoons for the Sistine Chapel tapestry series “The Acts of the Apostles”. The prints were engraved by Antoine Cardon after drawings made by Nicolas Joseph Ruyssen, and issued in three fascicules dated 1798, 1800, and 1801. As heads in only six of the seven cartoons are engraved, the intention was probably to produce further prints.

Essays after the Cartoons of Raphael at Windsor Drawn by the gracious Permission of His Majesty and by Permission most humbly Inscribed to Her Majesty the Queen of Great Britain By Her Majesty’s most Grateful Devoted Servant J. Ruyssen.

Title slightly marked and creased, occasional spotting or marking, one plate ([8]) with short tear in margin, another ([12]) with tear extending into image (both repaired without loss), otherwise in excel­lent state of preservation.

binding contemporary English half-calf over marbled boards, the flat decorated in gilt, and lettered Cartoons at Windsor by J. Ruyssen.

Extremely rare set of fifteen prints reproducing in actual size heads in Raphael’s cartoons for the Sistine Chapel tapestry series ‘The Acts of the Apostles’. There is no copy in Charles Ruland’s catalogue of the Raphael collection in the Royal Library at Windsor (1876), and an exhaustive search has located just two copies in public collections worldwide. 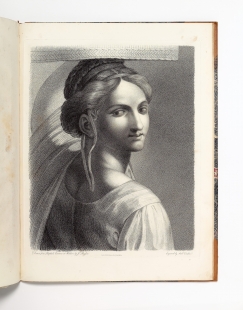 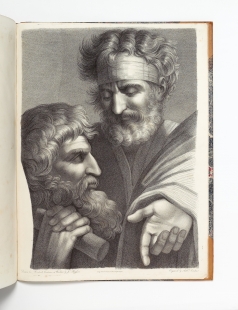 Acquired by the British royal collections in 1623, initially displayed in Whitehall, then at Hampton Court, and Buckingham House, the Raphael cartoons were taken in 1787–1788 to Windsor, where they were displayed around the Castle, and possibly also at Frogmore (the Queen’s House). By this date the Cartoons had become emphasized in England as Raphael’s best work and as ideal models for students of art to imitate.1

Our prints were engraved by Anthony Cardon after drawings made by Nicolas-Joseph Ruyssen, and were issued in three fascicules dated 1798, 1800, and 1801.2 As heads in only six of the seven cartoons are engraved, the intention was probably to produce further prints.

The draughtsman, Nicolas Joseph Ruyssen (1757–1826), was born at Hazebrouck (near Calais), and attended the L’École des Beaux-Arts de Saint-Omer, where he caught the attention of Anne Léon de Montmorency, prince de Rebecq, who brought him to Paris, and financed further study in Italy. Ruyssen was in Italy ‘for several years’3 according to his own account, for seven years according to another;4 he evidently was still in Rome in 1790.5 He is reported to have arrived in England via Holland in 1793. At some later, as yet unknown date, he found employment as drawing-master to the daughters of George iii and Queen Charlotte. Several artists were in service to the royal family at this time, including Biagio Rebecca (1735–1808) and Peltro William Tomkins (1760–1840), both teaching etching in addition to drawing.6 Like their predecessors, they set their pupils the task of copying (sometimes by tracing) old master drawings and prints in the royal collection, by Leonardo, Giulio Clovio, Stefano della Bella, Piazzetta, Marco Ricci, Gainsborough, Ridinger, Berchem, John Hamilton Mortimer, and Benjamin West, among others.7

In the words of a contemporary, Ruyssen ‘was no courtier; he was one of those blunt, hon­est worthies, whom no court could polish, and no favour could spoil’, whose specialty was drawing heads, hands, and feet on a large scale in black chalk.8 His drawing technique employed a variety of instruments, including a compass.9

Ruysson’s collaborator, the printmaker, Anthony Cardon (1772–1813), had entered the Royal Academy Schools in 1792, won a silver medal in 1794, and obtained the same year a commission to engrave (under the direction of Luigi Schiavonetti) the ‘Cries of London’ after Francis Wheatley.10 Cardon is best-known by his stipple-engraved portraits; his prints after Ruyssen gained him no celebrity, and they are all but forgotten by print historians.

The suspension of work on this project in 1801 suggests that Ruyssen had left royal employment.11 His activities in England thereafter are little documented: he perhaps tutored the children of David Gordon (1753–1831) and his wife Anne, of Abergeldie Castle, Ballater, Aberdeenshire, whom he painted circa 1804;12 in 1810 he was instructing an unspecified aunt (‘Miss Basset’) of The Hon. Frances Basset (1751–1855).13 In 1814 Ruyssen was again working in Hazebrouck, where from 1819–1825 he operated a school.

The two copies known are

The copy in the National Art Library, like ours, contains fifteen plates, issued 1798–1801, together with Cardon’s engraving (after Ruyssen’s drawing) of Raphael’s so-called self-portrait (in fact, a portrait of Bindo Altoviti), then in the Bessborough collection.14 The copy at Yale was bound for the second daughter of George iii, Princess Augusta Sophia (1768–1840), in two volumes: the first contains the six prints dated 1798; and the second the ‘portrait’-frontispiece and the six plates dated 1800 (the three prints dated 1801 are not present).

Two other presentation copies cannot now be traced: one was once in the library of the second son of George iii, Frederick Augustus, Duke of York (1763–1827), and was sold in 1827; 15 the other was in the library of the fifth son of George iii, Ernst Augustus, Duke of Cumberland (1771–1851), descended to his only son, George v, King of Hannover (1819–1878), and was sold in 1970.16 Other copies of the complete work, also now unlocated, were in the Merly Library, sold in 1813;17 in the library of Caroline de Bourbon-Siciles, duchesse de Berry, sold in 1837;18 in the library of Sir William Heathcote;19 and in the possession of Ruyssen’s heirs, in 1851.20 A single fascicule (six prints) is contained in a print album assembled by Richard Fitzwilliam, 7th Viscount Fitzwilliam (Cambridge, Fitzwilliam Museum, Acc. No. 40.10). A single fascicule, bound in red leather, with the cypher of Sophia Charlotte of Mecklenburg-Strelitz, consort of George iii, on covers, was seen in the market in 2013;21 another, bound in contemporary boards, its upper cover lettered ‘Her R.H. Princess Amelia’ (sixth daughter of King George iii, 1783–1810), appeared in 2014.22 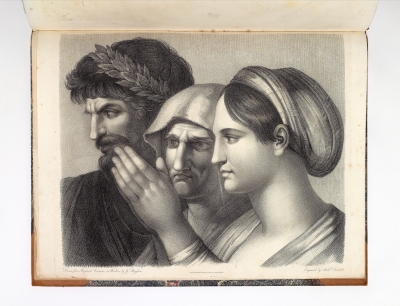 3. In 1803, Ruyssen published a book of twenty-four plates showing human figures or parts of them, offering this text in lieu of a title: ‘The Study for several Years in Italy of the most celebrated Models of Antiquity, the Works of Raphael, Domenichino, and other great Masters, added to the experience of twelve Years employed in successful Teaching in England, has I flatter myself enabled me to offer my Pupils a scientific, rational, and easy Method of expressing every kind of attitude of a Figure in proportion as formed by the Rules of Anatomy and Perspective. Most earnestly wishing my Pupils advancement, in gratitude for the very great Encouragement I have received – I take the Liberty of most humbly Dedicating to them this Collection of Principles. | J. Ruyssen | London Published as the Act directs Dec.r 1803’. It also is a rare work; three copies are known to the writer: British Library, 7805 eee.7; Victoria & Albert Museum, National Art Library, 30 F. 27; Winterthur Museum, NC765 R98.

8. Henry Angelo, The reminiscences of Henry Angelo (London 1904), p.154: ‘The studies of heads, hands, and feet, which he laid before his royal pupils, were frequently colos­sal, drawn upon coarse cartridge paper, and were loaded with chalk. He drew with rapidity, and his lines were bold and vigorous; and being a sad sloven in his process, and cutting the chalks for all his royal scholars, his fingers, and sometimes his face, became so smutty, that he might well have passed for a small-coal-man’.

15. Sotheby’s, ‘Catalogue of the extensive and valuable library of his Royal Highness the Duke of York, deceased, removed from his Royal Highness’s late residence, South Audley Street’, London, 7–31 May 1827, lot 1260 (contents of the copy not stated).