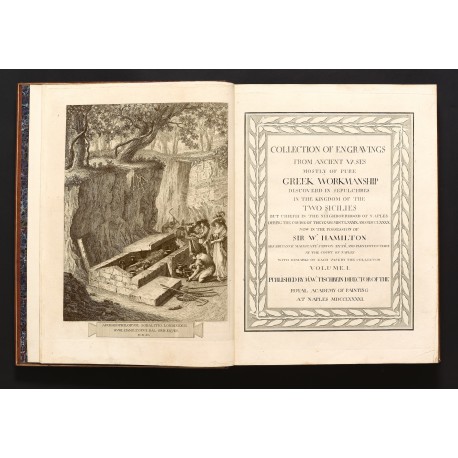 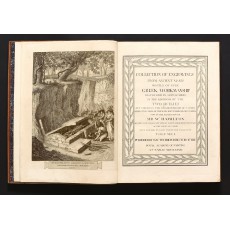 Collection of engravings from ancient vases mostly of pure Greek workmanship discovered in sepulchres in the kingdom of the Two Sicilies, but chiefly in the neighbourhood of Naples during the course of the years MDCCLXXXIX and MDCCLXXXX now in the possession of Sir Wm. Hamilton… with remarks on each vase by the collector

Fine copy of the catalogue of Hamilton’s second vase collection, gathered after selling the first to the British Museum in 1772, edited and illustrated by the German painter Johann Heinrich Wilhelm Tischbein (1751-1829), then director of the Naples Academy of Painting, assisted by the Russian ambassador at Naples, Andrei Yakovlevich Italinsky (1743-1827). This set includes the scarce “fourth volume”, a series of sixty-one plates without text, conceived before Hamilton’s forced departure from Naples (December 1798), but published afterwards, by Tischbein alone.

We are experiencing significant delays to a number of EU countries as a result of both new customs processes and ongoing Covid-19 measures
pdf (2.52 MB)
Print

Collection of engravings from ancient vases mostly of pure Greek workman­ship discovered in sepulchres in the kingdom of the Two Sicilies, but chiefly in the neighbourhood of Naples during the course of the years mdcclxxxix and mdcclxxxx now in the possession of Sir Wm. Hamilton... with remarks on each vase by the collector.

Text and plates, i: (81) ff. letterpress, signed (A)–Z2 Aa–Rr2 π1 (errata) and paginated 1–159 (3); plus five plates among preliminaries (frontispiece depicting William and Lady Hamilton witnessing the opening of a tomb, pl. [1]; engraved title-pages in English and French; and two plates numbered 2 and 3), and at end sixty numbered engraved plates.

Text and plates, iii: (52) ff. letterpress, signed π2 (A)–Z2 Aa–Bb2 (Bb2 inserted after π2) and paginated (6) 1–97 (1); plus seven unnumbered plates among preliminaries (twin title pages and five plates, of which one bears three separate engravings),1 and at end a sequence of sixty partly-numbered plates (numbers supplied in a later hand).

In very fine state of preservation.

Fine copy of the catalogue of Hamilton’s second vase collection, gathered after selling the first to the British Museum in 1772, edited and illustrated by the German painter Johann Heinrich Wilhelm Tischbein (1751–1829), then director of the Naples Academy of Painting, assisted by the Russian ambassador at Naples, Andrei Yakovlevich Italinsky (1743–1827). This set includes the scarce ‘fourth volume’, a series of sixty-one plates without text, conceived before Hamilton’s forced departure from Naples (December 1798),2 but published afterwards, by Tischbein alone.

Unlike the catalogue of Hamilton’s first collection, compiled by Baron d’Hancarville, and published in four volumes from 1766 to c. 1782, with highly-idealized, hand-coloured engraved illustrations of the vases, Tischbein’s catalogue relied on outline engravings, which ignored the contrast between light and dark areas. This new, ‘truthful’ style trans­formed the graphic representation of ceramics. The catalogue gained in importance after the loss of eight crates of vases en-route to England in 1798.3

The work was projected in three volumes with sixty engravings in each, the first due in October 1791.4 Although the first volume is indeed dated ‘1791’ on its title-page, it was not completed until 1793; the second volume, dated ‘1795’, was delivered dur­ing the autumn of 1796.5 The third volume, also dated ‘1795’, but dedicated to the Earl of Leicester by Hamilton, 1 January 1797, seems to have appeared just before Tischbein’s own depar­ture from Naples (January 1799).6 The ‘fourth volume’ has no title-page, and both the place and date of its publication are uncertain. Some infer from the absence of volume iv in the English collections supplied by Hamilton that it appeared after Hamilton’s death (6 April 1803).7 The copies of volume iv examined by the writer, however, are printed on the same paper used for volume iii,8 and this suggests that it too was issued at Naples.9

When Naples fell in 1799, Tischbein fled to Kassel, thence to Göttingen, Hannover, and Hamburg, where he remained until his appointment in 1808 as Hofmaler und Galerie-Inspektor of Herzog Peter Friedrich Ludwig von Oldenburg in Eutin. Tischbein had left Naples with the ‘materials’ of Hamilton’s catalogue, and for some years aspired to continue publication. In 1819, he abandoned the project, selling the materials to Alexander von Rennenkampff, who in turn sold them to the Stuttgart publishing house of J.F. Cotta, where they languished.10 Among these materials were many matrices which had never been published. Some sets of proof impressions taken from these plates circulated.11 Often referred to as a ‘fifth volume’,12 these sets contain varying numbers of plates: 40,13 64,14 81,15 84,16 97,17 99,18 and 113 prints19 have been reported. 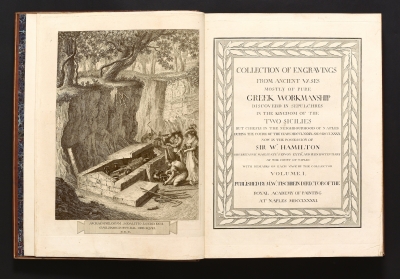 The frontispiece to the first volume, engraved by Cléner20 after a drawing by Christoph Heinrich Kniep,21 depicts Sir William and Emma standing beside an open tomb, admiring newly discovered vases (Fig. 1). Hamilton explains the image in the introductory text (‘To the Reader’) as ‘a representation of an ordinary sepulchre found lately at Nola’.22 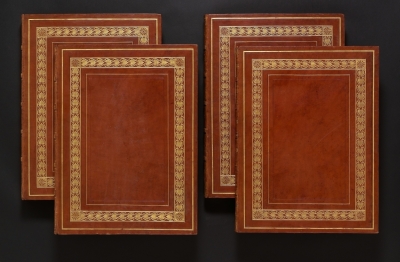 The work is usually encountered as three volumes; sets of all four volumes are rare, and those known to the writer include

1. In the Blackmer copy, the five plates after the twin engraved title-pages in volume iii are lettered (a, b, c, d/e/f, g); here they are not so designated. See Leonora Navari, Greece and the Levant: the cata­logue of the Henry Myron Blackmer collection of books and manuscripts (London 1989), pp.165–166 no. 778 (vols. i–iii only); and the catalogue of the British Architectural Library (op. cit.), p.2111 (vols. i–iii only): ‘A later state has the letters a–g and the numbers 1–60 added top right (with plates d, e, and f being printed together on the same leaf).’ Also reported are copies of volumes ii–iii with the plates in states before numbers.

2. A summary list of the subjects represented by the sixty-one plates in the ‘fourth volume’ was among the Hamilton papers dispersed by Sotheby’s, ‘Catalogue of valuable printed books, illuminated and other manuscripts, autograph letters, historical relics, &c.’, London, 25–27 May 1925, and is now BM Add Ms. 40,715 ff.67–74. Written on a paper with watermark ‘1795’, it is the only known record of his identifications of the vases illustrated there; see Ian Jenkins, Vases & volcanoes: Sir William Hamilton and his collection (London 1996), pp.57, 64 (note 153). Cf. Frank Brommer, Konkordanzlisten zu alten Vasenliteratur (Marburg 1979), pp.203–214.

3. A group of vases was recovered from the wreck hms Colossus in the 1970s and subsequently restored; see Valerie Smallwood and Susan Woodford, Fragments from Sir William Hamilton’s Second Collection of Vases Recovered from the Wreck of h.m.s. Colossus, Corpus Vasorum Antiquo­rum. Great Britain Fascicule 20, The British Museum Fascicule 10 (London 2003).

7. See, for example, Jenkins, op. cit, p.56, dating the fourth volume ‘probably after Hamilton’s death’. Hamilton had presented copies of his work to Sir Joseph Banks, The Royal Society, and Society of Antiquaries; none received volume iv: see British Library, 459 f.15 (Banks copy); Catalogue of the library of the Royal Society (London 1825), p.258; A catalogue of the printed books in the library of the Society of Antiquaries (London 1816), p.102. The ‘fourth volume’ is lacking also in the sets in Hamilton’s own library; see Christie, ‘A catalogue of the very choice and extremely valuable library of books of antiquities, and prints… the property of the late Sir W. Hamilton, k.b.’, London, 8–9 June 1809, p.28 lots 137–139.

8. Volumes iii and iv of this set are printed on the same laid paper; a similar copy was offered by B. Weinreb Ltd, ‘Catalogue 51: Classical Times to the Classical Revival’, London c. 1985, item 51.

17. Heydemann, op. cit., pp.308–313 (citing impressions in Vienna emanating from Tischbein; but see above, note 14, where sixty-four prints only are cited).

20. Antoine (variously Angelo) Cléner specialised in the reproduction of ceramics; now little-known, he is the focus of ongoing research by Salvatore Napoletano; see http://www.inha.fr/spip.php?article3515.