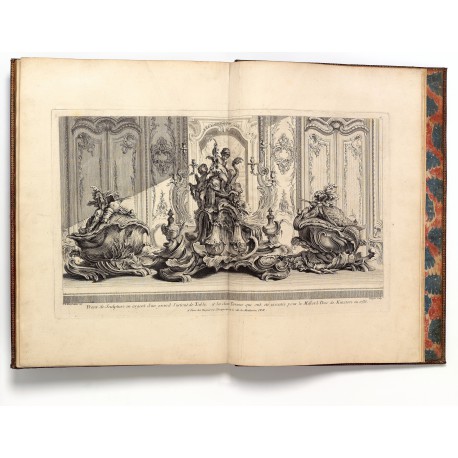 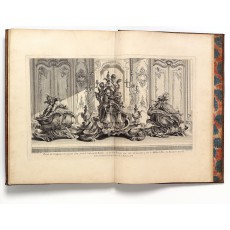 A superb copy of Meissonnier's Oeuvre, a collection of 118 engraved designs for silverware, interior decoration and furniture, memorial sculpture, illusionistic ceiling paintings, and architectural projects, including those for festivals. It is the ‘Bible of the Rococo’ style it represents and an immensely important historical document since few of Meissonnier's drawings for it have survived.

folio (560 × 405 mm), suite of engraved title, portrait of Meissonnier (engraved after a lost self-portrait by N.D. de Beauvais), and 118 numbered etchings and engravings of which three are double-page, thirty-six full-page, and the rest printed two, three, or four or more to a sheet (prints 27 and 118 omitted from the numeration and two unnumbered etchings added to series a, as usual).

Old abrasions along top and bottom edges of the large plate no. 100 (now folded into the book); trifling repairs to the joints; otherwise a very fresh and well-preserved copy.

A superb copy of Meissonnier’s Oeuvre, a collec­tion of one hundred and eighteen engraved designs for silverware, interior decoration and fur­niture, memorial sculpture, illusionistic ceiling paintings, and architectural projects, including those for festi­vals. It is the ‘Bible of the Rococo’ style it repre­sents and an immensely important historical document since few of Meissonnier’s drawings for it have survived.1

Born in Turin of Provençal parents, Meissonnier went to Paris around 1715 and by 1725 was well-enough known as a silversmith to be appointed orfèvre du roi at the factories at Gobelins. He was still working in metal as late as 1735, but by then was also déssinateur de la chambre et cabinet du roi (designer of court festivals) in succession to Jean i Berain, and décorateur du roi, internationally renowned as an architect and decorator. 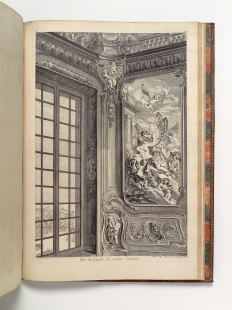 Image
Fig. 1 Decoration featuring a painting of ‘Zéphire et Flore’, designed by Meissonnier in 1734 for the palace of Count Franciszek Bielinski in Warsaw (engraving by Gabriel Huquier, reduced from 513 × 348 mm platemark) 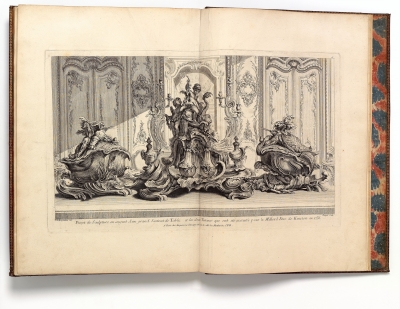 Image
Fig. 2 Silver centrepiece and tureen designed by Meissonnier. The tureen depicted (once in mirror image) is in the Cleveland Museum of Art; its pendant (with a variant lid) was sold by Sotheby’s in 1998 for $5.7m (engraving by Gabriel Huquier, reduced from 380 × 645 mm platemark) 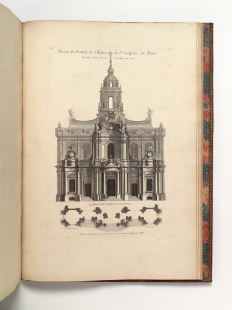 Image
Fig. 3 Project for the main façade of the Church of Saint Sulpice in Paris, designed by Meissonnier in 1726 (engraving by Claude Charles Riolet, reduced from 410 × 273 mm platemark)

Like Thomas Chippendale, Meissonnier’s reputation rests on his published designs rather than on actual work executed, of which only a small fraction survives. The most celebrated of the objects certifiably executed after his designs are a pair of silver tureens (illustrated on plate 115 of the Oeuvre; see Fig. 2) designed in 1735–1739 and executed by Pierre-François Bonnestrenne and Henri Guillaume Adnet for Evelyn Pierrepont, 2nd Duke of Kingston (one is now in Cleveland Museum of Art, the other was sold by Sotheby’s, 13 May 1998).

The 118 prints comprising the Oeuvre were published originally in cahiers or gatherings of a few plates each, beginning in the late 1720s, and by 1734 nearly fifty prints were avail­able for sale by their publisher, Marguerite Chéreau, widow of the publisher François i Chéreau, (1680–1729). Shortly thereafter her relative Gabriel Huquier (1695–1772) acquired her business. Huquier substituted his name as publisher on the old plates and continued to issue new cahiers, designating each by a letter of the alphabet, numbering the plates sequentially. Documentary evidence together with information pro­vided in the captions on the plates has enabled scholars to order the designs chronologi­cally, however the dates of publication of the separate cahiers are not definitely known, and even the date of the Oeuvre, the only issue of the plates described in the bibliographies, is uncertain.

The watermark in the paper of the Oeuvre is dated 1742. Owing to slip-shod draughtsman­ship in the edict governing the manufacture of paper, all paper issued in France after 1742 bears that date, no matter in what year it was actually made. Thus 1742 is only a terminus post quem for the publication of the Oeuvre itself. The address ‘rue St. Jacque au coin de celle des Mathurins’ engraved on the title and on several plates was occupied by Gabriel Huquier from 1742 until 1751. A likely date of publication is circa 1748, since a copy of the book is cited in the probate of the silversmith Thomas Germain in that year (evaluated at the high price of sixty livres). It is probable that Meissonnier himself selected the works to be presented in the Oeuvre and organised the prints in sets.

In all copies the smaller prints are imposed two, three, or more to the sheet, combined in different directions, without regard to the original constitution of the cahiers. There are slight variations between copies in the arrangement of the engravings on the sheets, but no copy is known which includes plates numbered 27 or 117.2 Two unnumbered plates are included in cahier a, illustrating the house of Léon de Brethous in Bayonne (1734–1735).

Appreciation of the mature Rococo style in which Meissonnier worked was never widespread in France. Although he was décorateur du roi, there seems to be no record of Meissonnier’s work for the crown. Most of his identified patrons were foreign­ers, not Frenchmen. When he died in 1750, extraor­dinary attacks on Meissonnier’s artistry and derogatory appraisals of the Rococo quickly appeared in France. Considered as a relic of a fading taste, it is perhaps not surprising that few contempo­rary purchasers of the Oeuvre afforded it a fine binding. Neither Brunet nor Cohen-De Ricci, who comment on the exceptional rarity of this book, cite a copy bound in contemporary morocco. Apart from our own, elegantly bound copy, we are able to trace only the one in contemporary German red morocco, formerly in the libraries of Sir Robert Abdy and Edmund L. Lincoln (see below). 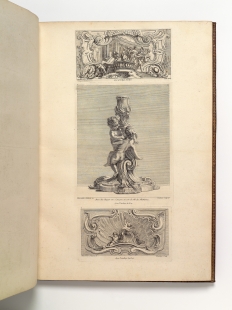 A general interest in ornament for its own sake arose in the second quarter of the nineteenth century and the apogee of collecting of ornamental prints probably was reached in the 1860s, when the celebrated collections in Vienna and Berlin were both founded. The rarity of Meissonnier’s Oeuvre became apparent4 and the book realised high prices when the libraries of the pioneer collectors of ornament were dispersed.5 During the twentieth century, taste moved away, the value of Meissonnier’s Oeuvre declined, and has only recently revived: 2. Triumph of the Baroque, Architecture in Europe 1600–1750, catalogue of an exhibition held at the Palazzina di Caccia di Stupinigi, July–November 1999, edited by Henry A. Millon (Milan 1999), p.515 no. 301. A few cop­ies contain in addition two plates of buildings in different styles (one with thirty-one illustrations, the other with fifteen), evidently intended for an unpublished treatise on architecture; see Robin Middleton, in Avery’s choice: Five centuries of great architectural books, edited by Adolf Placzek (New York 1997), pp.67–68 no. 98.

3. Regency to Empire: French printmaking 1715–1814, catalogue of an exhibition held at the Baltimore Museum of Art, 10 November 1984–6 January 1985 (Minneapolis & Baltimore 1984), no. 19; see also Fuhring, op. cit., p.371 no. 118 (locating a second impression in Paris). An impression of the title-print (with the publication line and print­maker’s signature, but before other lettering) was loosely inserted in a copy of Meissonnier’s Oeuvre offered by B. Weinreb Limited, ‘Catalogue 21: Engraved orna­ment’, London 1967, item 68, and is now in the Victoria & Albert Museum, Department of Prints and drawings, Q.15; for other states of this print, see Fuhring, op. cit., p.313 no. 1.