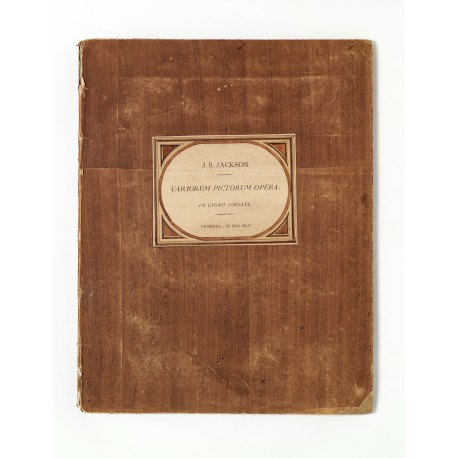 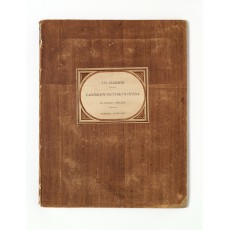 A suite of chiaroscuro woodcuts reproducing seventeen works of art by great Venetian painters of the sixteenth century, then in churches and lay confraternities of Venice and its environs, or in the private collection of the series’ principal patron, Consul Joseph Smith. The chiaroscuro woodcut process developed in response to a demand for reproductions of monochromatic wash drawings, and until Jackson began to experiment with the technique, in 1735, had not been used for the interpretation of oil paintings. Complete sets of Jackson’s prints are rare and we notice just six passing through the auction sale rooms during the past forty-five years.

The sheets trimmed by the binder well outside the border line (average margin 40 mm). Repaired tear in the fore-edge of the title-page, spotting in some margins, otherwise excellent impressions in fine state of preservation. 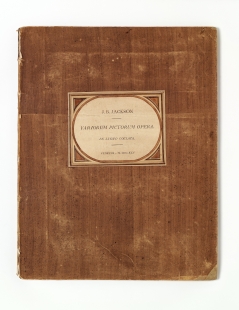 A suite of chiaroscuro woodcuts reproducing seventeen works of art by great Venetian painters of the sixteenth century, then in churches and lay confraternities of Venice and its environs, or in the private collection of the series’ principal patron, Consul Joseph Smith. Three prints have a certain documentary value as the originals are now lost; two others are of interest because the originals have been cut down (Titian’s ‘Virgin in the Clouds with Six Saints’) or restored (Tintoretto’s ‘Miracle of Saint Mark’). 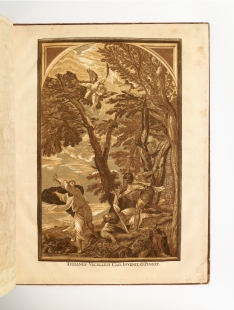 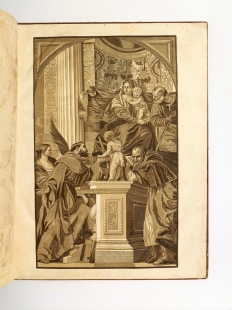 The chiaroscuro woodcut process developed in response to a demand for reproductions of mono­chromatic wash drawings and until Jackson began to experiment with the technique, had not been used for the interpretation of oil paintings. Jackson’s first chiaroscuro wood­cut is ‘Christ giving the Keys to Saint Peter’ after a drawing by Raphael, executed in Paris in 1727 for the Recueil Crozat, an album of reproductions of drawings and paintings in the best French collections.

After his arrival in Venice in 1731, Jackson was occupied primarily in making conventional woodcuts to decorate or illustrate books printed by Baglioni, Pezzana, and others. Receiv­ing encouragement from Antonio Maria Zanetti, he also made several chiaroscuro woodcuts after old master drawings and prints, and in 1735 he printed on a cylinder press set up in his own house ‘The Judgment of Salomon’ after Rubens, the first chiaroscuro woodcut to reproduce a painting in a full range of tones. In 1738 Jackson reproduced two works in Consul Smith’s collection by the chiaroscuro method, a bronze statue of Neptune after Giambologna, and a small painting by Rembrandt, ‘Descent from the Cross’ (now National Gallery, London).

Well-satisfied by these prints, Consul Smith proposed to Jackson that he undertake a series of large chiaroscuro woodcuts after Venetian masters. The series was to be sold as a bound volume from the shop operated for Smith by Giovanni Battista Pasquali. Finance came from Smith, his friends Charles Frederick and Smart Lethieullier, and other English resi­dents in Venice. Jackson began work in 1739 and for the next four and a half years he was wholly occupied with planning, cutting, and proofing the blocks from which the ‘Venetian set’ ultimately was printed in 1745.2

In order to preserve the detail and grandeur of the originals, Jackson worked in a large for­mat, using three sheets of paper for each of the two largest paintings (546 × 1248 mm, 547 × 1278 mm) and two sheets to reproduce three paintings (565 × 900 mm, 584 × 850 mm, 559 × 762 mm). Jackson sought a rich decorative effect and did not repeat literally the col­ours of the paintings. The key blocks he printed in a soft grey or buff colour and the three additional blocks in brown-ochre or grey-green ranges, ending each impression with a dark colour that defined the shadows and described the contours of the figures. Leaving the white of the paper to shine through for small areas of highlight, Jackson claimed to achieve ten tints through the overlapping of the transparent colours. The cylinder press enabled him to exert such pressure that the tints became deeply embossed in the paper, adding cast shadows to the range of printed tones.

In recent years, these chiaroscuro woodcuts have featured in exhibitions devoted to repro­ductive printmaking generally,4 and in exhibitions of reproductive prints after Veronese,5 Tintoretto,6 Titian,7 and Bassano.8 Individual prints have been shown in exhibitions of chiaroscuro woodcuts and of colour printing, notably those organised by the Institut Néerlandais in Paris and Rotterdam in 1965,9 Yale Center for British Art in New Haven in 1978,10 Indiana University Art Museum in Bloomington in 1989,11 and Hunterian Art Gallery in Glasgow in 1994.12 The entire suite was exhibited at the Art Gallery of Ontario in Peterborough in 198313 and at the Museo Biblioteca Archivio di Bassano del Grappa in 1996.14 The set of four pearwood blocks cut for Bassano’s ‘The Entombment’ was exhibited in Bassano del Grappa in 1990.15

Complete sets of the prints are rare and we notice just seven passing through the auction sale rooms in the last forty-five years.16 Loosely inserted in the copy are trial proof impres­sions of three blocks, representing Veronese’s ‘Mystic Marriage of Saint Catherine’ and two sheets, pasted together, forming the ‘Marriage of Cana’ (see Fig. 4). Two comparable proof impres­sions, also printed in grey ink, are in the National Gallery of Art, Washington, dc (reproduced by Kainen, op. cit., pp.37–38). 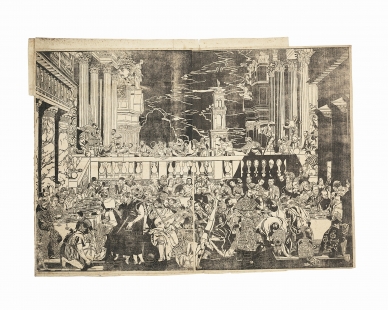 Image
Fig. 4 Trial proof of the key block of ‘The Marriage at Cana’, after Veronese.
Chiaroscuro woodcut (on two sheets, 610 × 835 mm joined)