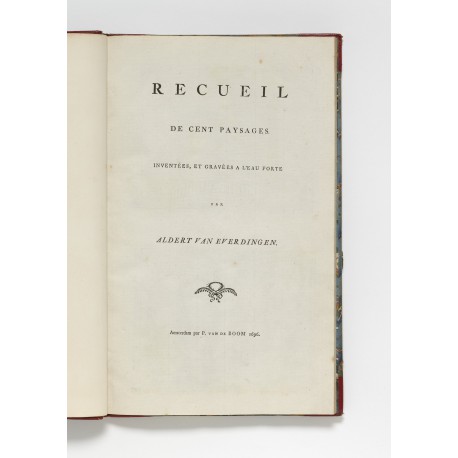 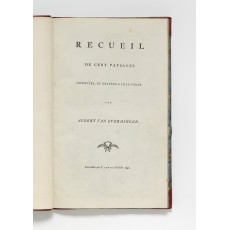 The Recueil de cent paysages is a nearly-complete collection of Allart van Everdingen’s landscape etchings, supplemented by two complementary etchings by Adriaen Hendricksz. Verboom, a “frontispiece” devised by another printmaker, and letterpress title with imprint “Amsterdam… 1696”, a clumsy attempt to make the restruck prints seem near-contemporary. Judging by the paper evidence, the prints were issued circa 1810-1820, during a period when Everdingen had numerous followers, and his prints were commanding high prices in the market. Only one other complete copy is recorded (Rijksmuseum Research Library, Amsterdam).

folio (318 × 192 mm), (51) ff., complete, comprising letterpress title and 50 leaves on which are printed 101 engravings (one, two, or three on the recto of each leaf), the first print (the so-called ‘fron­tispiece’) signed with the monogram ch (Charles Hodges?), the rest either by Adriaen Hendrickz. Verboom (2 prints) or Allart van Everdingen (98 prints).1

Paper defect in folio 26 (tiny loss of image), a few insignificant spots and stains; overall in fine state of preservation. 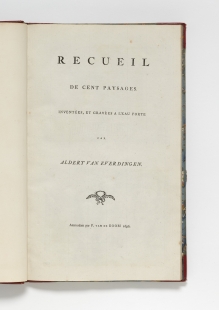 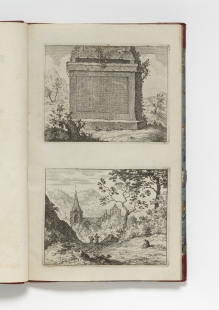 Image
Fig. 2 Above ‘Frontispiece’, signed ch (Charles Hodges, d. 1846)
Below ‘The Church in the Valley’, by Everdingen

The Recueil de cent paysages is a nearly-complete collection of Allart van Everdingen’s landscape etchings, supplemented by two complementary etchings by Adriaen Hendricksz. Verboom, a ‘frontispiece’ devised by another printmaker, and letter­press title (transcribed above) with imprint ‘Amsterdam… 1696’. It is testimony to the appreciation of Everdingen’s graphic oeuvre which continued long after the artist’s death. Apparently plundered by generations of printsellers, complete copies of the Recueil de cent paysages are now unfindable: only one other complete copy is recorded (Rijksmuseum Research Library, Amsterdam).

The graphic oeuvre of Allart van Everdingen consists of about 165 prints (etchings and ten rudimentary mezzotints), of which about 104 depict either the Dutch countryside or the mountainous vistas of Sweden and Norway, and fifty-seven illustrate the story of Reynard the Fox.2 In their original states they are mostly pure etchings, often left unfinished with their borderlines incomplete or absent. It is likely that they were originally printed and distributed by Everdingen himself.

The matrices subsequently passed (evidently as a group) through other hands, to be succes­sively reworked and restruck (most prints are known in three or four states).3 Borderlines were routinely strengthened with the engraver’s burin, corners finished, shadows darkened by cross-hatching, and the sky retouched both in dry­point and with the burin; several prints were radically reworked.4 The two landscape etchings by Verboom (c. 1628–c. 1670) were not signifi­cantly altered.5

The letterpress title with imprint ‘Amsterdam 1696’ is deceptive, a clumsy attempt to make the restruck prints seem near-contemporary (see Fig. 1). Judging by the paper evidence, the Recueil de cent paysages was issued circa 1810–1820, during a period when Everdingen had numerous followers, and his prints were commanding high prices in the market.

The dealer-connoisseur, Rudolph Weigel, revising Bartsch’s catalogue of Everdingen’s prints, in 1843, recognised that the date on the title-page was implausible, and associated the publication with the engraver and printseller Charles Howard Hodges (circa 1764–1837).6 Subsequently, W.E. Drugulin, although unable to locate a set containing the title-page, also suggested a date of issue much later than ‘1696’.7 Observing a ‘Pro Patria’ watermark in the etched ‘frontispiece’ (see Fig. 2), Drugulin proposed a date of ‘vers 1800’.8 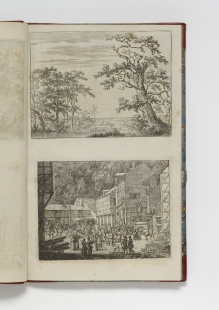 Image
Fig. 3 Above ‘Landscape with a stream’, by Verboom
Below ‘The Second Spring’ (from the set of ‘Four Mineral Springs’), by Everdingen 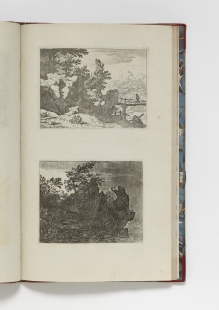 Image
Fig. 4 Above ‘The Man on the small Wooden Bridge’, by Everdingen
Below Everdingen’s ‘The Large Rock at the River’ (after alteration into a night-piece)

The etched frontispiece depicting a pedestal in a landscape, with two rows of bricks on the plinth, a tree stump in left foreground, is signed indistinctly at lower right. Drugulin failed to read the monogram;9 a few years later, Dutuit examined an impression of the frontispiece in the British Museum, in which the monogram could be read as ch.10

The ‘Charles Howard Hodges’ cited by Weigel in 1843 was a mezzotint engraver and printseller, active in Amsterdam from 1788/1794 until his death in 1837, working inde­pendently, and also as an export agent for the London printseller William Humphrey. There can be little doubt that he was the publisher of the Everdingen ‘Recueil’: included in the posthumous auction sale of his stock was a lot containing no less than sixteen copies of the book.11 There is no similarity, however, between his engraved work and the ‘frontispiece’ to Recueil de cent paysages, signed ch. The frontispiece may be the work of another Charles Hodges (d. 1846), also an Englishman resident on the Continent (from 1830–1840 in Munich). This ‘Charles Hodges’ is known for twenty-three reproductive prints after Dutch masters, including Everdingen, which he signed with various forms of his initials ch.12

These sets of the prints are known to the writer

3. Everdingen’s matrices may have been included in an estate sale conducted in Amsterdam on 11 March 1676 (no catalogue survives); a second sale, held after the death of his widow, Janneke Brouwers, on 19 April 1709, offered paintings only (Lugt 220; Alice I. Davies, Allart van Everdingen 1621-1675: first painter of Scandinavian landscape, Doornspijk 2001, p.34, and facsimile reproduc­tion of the sale catalogue pp.199–202). The matrices of Everdingen’s Reynard the Fox prints were acquired at auction by the Amsterdam publisher Pieter ii Schenk and passed to Simon Fokke (1712–1784), who reworked them for Gottshed’s illustrated edition of the tale (Leipzig & Amsterdam 1752); see Johannes Hoffman, ‘Allart van Everdingen und Goethes “Reinecke Fuchs”’ in Zeitschrift für Bücherfreunde, Neue Folge, 12 (1920–1921), Heft 9, pp.188–191 (letter to Goethe from Breitkopf, Schenk’s partner in the 1752 edition). It is therefore supposed that Fokke also retouched Everdingen’s landscape prints (cf. Drugulin, op. cit., p.xii).

13. According to the library’s opac, the copy is in octavo format, and ‘Sur feuille 8 une eau-forte par A. Verboom’ (as in our copy; the other Verboom print occurs in our copy on folio 3).