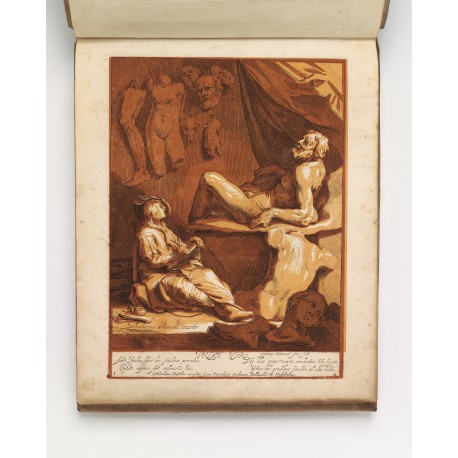 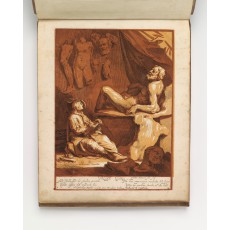 An early issue of Abraham Bloemaert’s widely disseminated model book for student draughtsmen, presenting figure compositions and studies of the parts of the body, and a dozen similar examples of domesticated animals.

We are experiencing significant delays to a number of EU countries as a result of both new customs processes and ongoing Covid-19 measures
pdf (2.22 MB)
Print

binding contemporary Dutch vellum over paper boards; covers decorated in blind with a blind panel, floral ornament at each corner, and centre-piece. 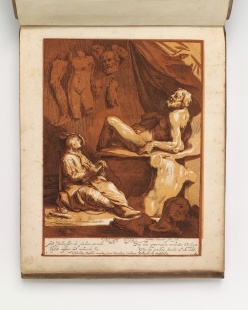 An early issue of Abraham Bloemaert’s widely disseminated model book for student draughtsmen, presenting figure compositions and studies of the parts of the body, and a dozen similar examples of domesticated animals. ‘In almost every large col­lection of old master drawings, there are drawn copies – by ama­teurs as well as starting professional art­ists, but mostly anonymous – after single leaves or parts of Bloemaert’s influential Teken­boek’.4

The work was conceived jointly by Abraham and his son Frederick (circa 1616–1690), in the late 1640s, in an attempt to exploit the large stock (more than 1600 sheets have sur­vived) of Abraham’s drawings. A group of drawings, including some connected to paint­ings dating from the 1620s and 1630s, was assembled, and for the purpose of sty­listic unity recopied by Abraham in a uniform technique, apparently within a brief period of time (four draw­ings are dated 1648 and one 1650).5 Frederick then set about engraving these drawings (mostly in reverse), numbering the matrices con­secutively, and publishing them in instal­ments from about 1650.

Instead of a systematic course of instruction, such as his friend Crispijn van de Passe had presented in La prima parte della luce del dipingere (and two fur­ther instalments, Amsterdam 1643–1644), in which similar plates are combined with a didactic text, Abraham Bloemaert offers a loosely-organised collection of visual models with no theo­retical ex­position in the form of a text. In the first three of its eight parts, a sequence is followed: studies of heads, hands, and limbs of the body, progressing to entire figures, and finishing with a print (or prints) of reli­gious figures. The remaining five books have no apparent organisation, except that the nudes and animals are grouped together, and it may be the publication commenced without a definite plan established from the start.

By 1656 or 1658, Frederick had completed and published six instalments of twenty plates, each instalment preceded by a title-print in Dutch and Latin with legend fre: Bloemaert fecit et excudit (or similar).6 He subsequently engraved two more fasci­cules, enlarging the drawing book to eight instal­ments (160 plates). About a dozen of these forty new plates are further studies of heads, hands, and legs; eight plates are nudes; and the rest are putti, figure compositions, and all the animals.7 Since no impres­sions bearing Frederick’s excudit are known, it is assumed he never published the new prints himself. The impetus to enlarge the work seems rather to have originated with the publisher Nicolaus ii Visscher (1649–1702).

Visscher had taken over the family business from his father Nicolaus i in 1679 and he con­tinued to operate it until his death in 1702. In March and September 1682, he was granted privileges by the States of Holland and West-Friesland to publish maps and prints. Before that date, he issued an ‘interim edition’ of the Bloemaert drawing book, replacing Frederick’s et excudit with his own name on the 120 original matrices, and adding a sev­enth fascicule of twenty newly-engraved prints.8 In 1682 Visscher brought out the so-called ‘second edition’, containing 160 prints organised in eight fascicules, and now protected by a privilege.9

The title of the Prima pars (plate no. 1), showing a student draughtsman, is a combined engraving and chiaroscuro woodcut: the copper matrice prints the line, one woodblock superimposes the half-tone (sparing the lights), and another woodblock the shadows. In the first edition, six other engravings had been similarly printed, with either one or two chiaro­scuro tone blocks cut in wood (plate nos. 20, 40, 60, 74, 75, 76). For Visscher’s second edition, an additional en­graving was given this special treatment (plate no. 140), and at some point the eight copper matrices to be printed with tone blocks were lettered A–H.10 In our copy, however, only the title and plate 20 (‘Kneel­ing Saint in prayer’) have tone back­grounds added. The copy in the National Gal­lery of Art is identical in this respect;11 we presume both copies represent a later issue of the prints after the deterioration or loss of most of the wood blocks. We have yet to trace a copy of Visscher’s edition in which all eight possible chiaroscuro plates are pre­sent (see provi­sional census below). 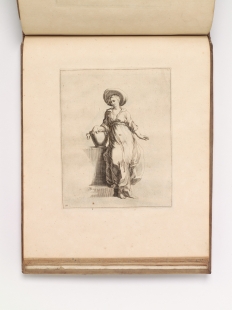 Image
Engraving by Frederick Bloemaert after a drawing by his father, Abraham (plate 111)

In 1722, the matrices passed into the possession of Louis Renard, who reorganised and renumbered them, and published them as Artis Apellae thesaurus at Amsterdam in 1723 in association with Bernard Picart — and refused thereafter to have any reprints made.12 The matrices eventually were acquired from Renard by Reinier and Josua Ottens, and published in 1740 as Oorspronkelyk en vermaard konstryk teken­boek. What began as a collection of teaching models for students became, in the editions pub­lished by Reinier and Josua Ottens, nearly a century later, a costly work aimed at collectors, among whom there was strong, ongoing interest in Abraham Bloemaert.

While copies of the Ottens editions quickly found secure homes in libraries, the earlier editions – like most books of instruction – seem to have been thumbed out of existence. All that can be located of Frederick Bloemaert’s first edition are a fragment of one hun­dred prints (five fascicules) in Paris,13 and five complete copies (six fascicules, 120 plates), in London,14 Los Angeles,15 New York,16 Oxford,17 and Rotterdam.18

Visscher’s second edition is also rare, and complete copies with all 160 prints in good state of preserva­tion, like the present one, are almost unknown. Of the copies of Visscher’s edi­tion located in public collections,19 only the one in the National Gallery of Art like ours contains all 160 prints

● Princeton, Princeton University Library, Oversize ND653.B6A2q. Incomplete: ‘ t.p. and possibly some plates missing’ and ‘some plates mounted, apparently from a different ed.’, according to library Online Public Access Catalogue. Seven chiaro­scuro prints are present in this set (plates 1, 20, 40, 60, 74, 75, 76; plate 140 is an engraving only).20

No modern reprint of any edition exists.

1. The countermark dp probably signifies Dirk Pietersz. de Jong, manager of the mill ‘De Visser’. A similar mark is reproduced by Henk Voorn, Die papiermolens in de provincie Noord-Holland (Haarlem 1960), no. 155, noting ‘the initials dp accompany the arms of Amsterdam from 1694 to 1722’ (p.541).

3. The countermark iv signifies either Jean Villedary, a French maker of fine papers, or one of the Dutch makers who adopted the countermark in order to pass off their paper as Villedary’s (Voorn, op. cit., p.121).

9. The ‘second edition’ is offered for sale in three cata­logues of Visscher’s stock evidently published in 1682 (the Dutch version, although undated, is prefaced by the texts of privileges granted to Visscher in that year; see Cornelis Koeman, Atlantes Neer­landici, Amsterdam 1969, iii, p.155, for partial tran­scription). The Visscher stock cata­logues are accessible through the microfiche project ‘Book Sale Catalogues of the Dutch Republic, 1599–1800’, as no. 2452 (p.14: ‘Teken-Boeck, door Abraham en Fred. Bloemaert, in 8 deelen. 160 Blad’), no. 2116 (p.15: ‘Livre a designer par Abraham & Frederic Bloemaert, en 8 parties – 160 [Feuilles]’), and no. 2117 (p.13: ‘Buch der Reißenskunst, durch Abraham und Friedrich Blumert, in 8. Theilen – 160 Bogen’).

13. Bibliothèque nationale, Cabinet des Estampes, Ec40a. Described by Bolten, op. cit., 1985, p.66, as ‘containing 100 plates arranged in five parts’, creating expectations it represents an issue of the work before all 120 prints had been en­graved; however, Roethlisberger, op. cit., p.393, describes it rather as ‘100 plates cut to the edge and mounted into the Mariette volume of the oeuvre of Bloemaert’ (i.e. without evidential value for the earliest publication of the prints).

14. British Museum, Prints & Drawings, 156. a. 2. Described by Jaap Bolten, Method and Practice: Dutch and Flemish drawing books 1600–1750 (Landau 1985), pp.51–53 (title of Prima pars repro­duced p.49). The title and all six chiaroscuro prints are present in this set. The watermarks are said to be similar to W.A. Churchill, Watermarks in paper in Holland, England, France, etc., in the 17th and 18th cen­turies and their interconnection (Amsterdam 1935), no. 398 (engravings), and no. 315 (engravings combined with chiaroscuro). Strauss, op. cit., p.346, identifies the watermark as a ‘crowned escutcheon with fleur de lys’.

17. Oxford, Bodleian Library, Radcl. B. 8. Radcliffe’s copy with his engraved exlibris (signed B.B.S.), bound in late 17th-century mottled calf. This copy – unknown to Bolten and Roethlisberger – is entered in Bodley’s opac as ‘A Drawing book, engraved by F. Bloemaert after A. Bloemaert. Amst.? c. 1660’. The title and all six chiaro­scuro prints are present in this copy (engraving 4 is lack­ing). The watermarks include three versions of a crowned escutcheon (one accompanied by initials gg, another with initials ph), and Caduceus (private communication dated 22 October 2007 from Paul Quarrie).