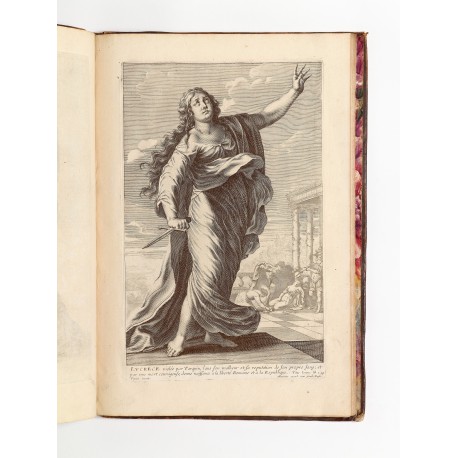 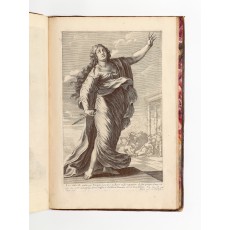 Three suites of prints engraved after designs by Claude Vignon, a painter and prolific originator of designs for illustrators, with a distinctive Mannerist-Caravaggesque style well-suited for heroic portraiture. In La Galerie des femmes fortes, twenty famous women of ancient, biblical, and recent history are shown in full-length, theatrical poses of great pathos, and often in movement. Different moments in time are depicted in the foreground and background of each composition; the foreground figure of “Judith”, for example, is shown with the severed head of Holofernes, while in the background scene an angel hands the praying heroine her sword. Gilles Rousselet (1610-1686) engraved the figure in each print and Abraham Bosse (1602-1676) etched the background scene. In the following suite of prints, known as the Sept Merveilles du Monde, Rousselet again engraved the full-length figures depicted in the foregrounds and Bosse etched the canonical seven wonders of the ancient world shown in the backgrounds. The third suite in the volume, known as Les Sept Sages de la Grèce, depicts the purported founders of Western Philosophy. Jean Couvay (1622-circa 1680) here engraved the foreground figures while Abraham Bosse again etched the background scenes.

Three suites of prints engraved after designs by Claude Vignon, a highly versatile artist, painter and prolific originator of designs for illustrators, espe­cially sought after by writers of the Précieux circle, such as Desmarets de Saint-Sorlin, Madeleine de Scudéry, and Jean Chapelain. In his youth, Vignon had studied in Rome, where he formulated a dis­tinctive Mannerist-Caravaggesque style well-suited for heroic portraiture. 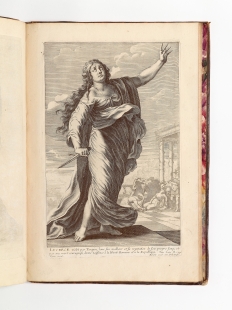 In La Galerie des femmes fortes, twenty famous women of ancient, biblical, and recent history are depicted in full-length, theatrical poses of great pathos, and often in movement. All the prints con­sist of two planes, one so far in advance of the other that the heroine who occupies it towers over the figures in the background scene, adding consid­erably to her grandeur. Different moments in time are depicted in the foreground and background of each composition; the foreground figure of ‘Judith’, for example, is shown with the severed head of Holofernes, while in the background scene an angel hands the praying heroine her sword. Gilles Rousselet (1610–1686) engraved the figure in each print and Abraham Bosse (1602–1676) etched the background scene.1 A number of Vignon’s prepara­tory drawings for the series are known.2

The title-print of the suite, representing the regent widow of Louis xiii Anne of Austria as another example of a strong woman acting heroically, was designed by Pietro da Cortona (1596–1669) and engraved by Charles Audran (1594–1674).3

The prints are usually encountered as illustrations within a book by the Jesuit Pierre Le Moyne (1602–1671), entitled La Galerie des femmes fortes avec leurs portraits, and pub­lished at Paris ‘Chez Antoine de Sommaville, au Palais en la salle des Merciers, à l’Escu de France’ under a privilege granted to Sommaville on 1 April 1647. Only one of sixteen sub­se­quent editions of Le Moyne’s book pub­lished between 1647 and 1672 (in French and also English, German, Spanish, and Italian translations) is illustrated by these plates; the others have mediocre copies of the Vignon-Rousselet-Bosse plates, or are not illustrated.4 Vignon’s femmes fortes thereby became widely disseminated and served as models for contempo­rary painters and craftsman.5 Today the images are chiefly of interest for the study of feminism in France in the sev­en­teenth century6 and the visual representa­tion of pow­erful women generally.7

Although a few specialists speculated that Pierre i Mariette retained the matrices and printed impressions which he sold himself, until now no such impressions have come to light.8 In our hitherto unrecorded reissue of the prints by Mariette, the frontispiece and twenty plates are numbered, and the heroines presented in new order

the Old Testament prophetess and judge ■ Deborah, shown armed with a sword and shield, and in the background scene exhorting Barak to lead his men against Sisera, and deliver Israel from the oppression of the Canaanite King Yavin (pl.2); the Jewish widow ■ Judith, shown returning to Bethulia with the disembodied head of the general Holofernes, his camp depicted in the background (pl.3); the Israelite ■ Jahel, married to a Canaanite, shown holding the tent peg which she will drive through the head of Barak, the aftermath of her deed depicted in the background (pl.4); a Jewish woman (Hannah, here named ■ ‘Salomone’), whose seven sons were tor­tured and executed by Antiochus for refusing to bow down to a statue and eat pork, shown in the back­ground telling her youngest child to refuse the king’s commandment (pl.5); ■ Marianne, wife of Herod, falsely accused by him of tyranny and infidelity, and executed (pl.6); ■ Zenobia, Queen of the Palmyrene Empire after the assassination of her husband and stepson, shown in the background scene to be a fear­less huntress (pl.7); the Roman ■ Arria, wife of the Cacina Paetus, who chose death over wid­owhood when her husband was condemned to death by the Emperor Claudius (pl.8); ■ Porcia, the wife of Brutus, and implicated with him in the plot to assas­sinate Julius Caesar, shown in the back­ground com­mitting suicide by swallowing live coals (pl.9); ■ Cloelia, held hostage by the Etruscan king Lars Porsenna, shown in the background escaping with other young Roman girls on horseback across the river Tiber (pl.10); ■ Panthea, wife of Abradatas, king of Susa in Xenophon’s life of Cyrus, who com­mits suicide after her husband’s death in battle (pl.11); a young ■ French maid, abducted by Duke Amalo in Gregory of Tour’s Historia Francorum, who resorts to murder to pre­serve her chastity (pl.12); ■ Artemisia ii of Caria, the grieving widow of king Mausolus, shown with the cup in which she mixed his ashes in a daily drink during the two years that she survived him (pl.13); the Roman ■ Lucretia, holding the dagger with which she committed suicide after her rape by Sextus Tarquinius (pl.14) (see Fig. 1); the Galatian princess and priestess of Artemis ■ Camma, widow of Sinatus, who avenged the death of her husband by poisoning his rival and her­self, holding the deadly chalice (pl.15); ■ Pompeia Paulina, the wife of Lucius Annaeus Seneca, shown attempting suicide while in the background her husband slowly bleeds to death (pl.16); the Milesian ■ Monime, Mithridates’ wife, holding the broken diadem with which she had tried to hang herself, shown in the background offering her neck to the armed eunuch who had brought her the order to die (pl.17); a young ■ Cypriot, carrying the torch with which she set fire to the Turkish fleet in the harbour of Nicosia (pl.18); ■ Joan of Arc, in the background her soldiers break the siege of Orléans (pl.19); ■ Mary Stuart, queen of Scotland, grasping a crucifix, her martyrdom de­picted in the background (pl.20) ■ Eleanor of Castile, wife of Prince Edward (the future Edward i of England), and his com­panion on the Eighth Crusade when she is said to have saved his life by sucking deadly poison from a knife wound, this scene de­picted in the background (pl.21)

The second suite of prints in the album, known as the Sept Merveilles du Monde, is another collabora­tion of Claude Vignon and the printmakers Gilles Rousselet and Abraham Bosse. Rousselet again engraved the full-length figures depicted in the foregrounds and Bosse etched the canonical seven wonders of the ancient world shown in the back­grounds. Beneath each print are six lines of expository verse of unstated origin. 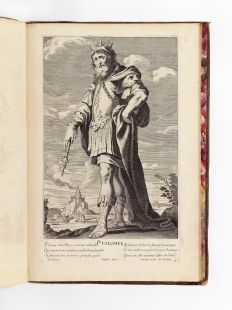 The subjects are presented in this order

■ Sphiron, before the colossal ivory and gold Statue of Zeus that he commissioned from the Athenian sculptor Phidias circa 440 bc (pl.1); ■ Pharaon (Khufu, or Cheops), the second pharaoh of the Fourth Dynasty, generally accepted as being the builder of the Great Pyramid of Giza shown in the background (pl.2); ■ Ptolemy, with the Lighthouse of Alexandria conceived and initiated by Ptolemy Soter around 290 bc, and completed after his death, during the reign of his son Ptolemy Philadelphus (pl.3) (see Fig. 2); ■ Teagene, depicting in the background the Colossus of Rhodes sculpted by Chares of Lindos (pl.4); ■ Antiope, Queen of the Amazons, before the Temple of Artemis at Ephesus where the Amazons offered sacrifices to their goddess (pl.5); ■ Semiramis, leg­endary Queen of Assyria, showing in the background the Hanging Gardens of Babylon (pl.6); ■ Artemisia ii of Caria, showing in the background the Mausoleum of her husband Maussollos at Halicarnassus (pl.7)

Véronique Meyer suggests this suite was executed about 1639–1640, and cites as a termi­nus ante quem a thesis print by Gérard Jollain engraved in 1646. She identifies two states (before and with numbers), locates impressions of both (in the Bibliothèque nationale de France), and reproduces a set of impressions in first state. None of Vignon’s preparatory drawings for the series is known to survive.

The third suite in our album, known as Les Sept Sages de la Grèce, depicts the purported founders of Western Philosophy. All the prints were designed by Claude Vignon (one of his preparatory drawings is known).9 Jean Couvay (1622–circa 1680) engraved the foreground figures and Abraham Bosse again etched the background scenes. Six lines of verse of unstated origin appear beneath each print. 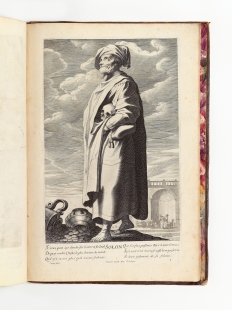 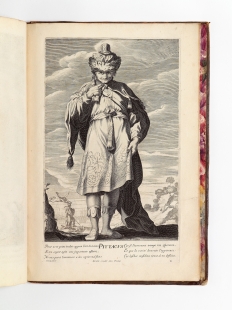 The subjects are presented in this order

■ Solon of Athens, with a skull under his arm, shown in the background visiting Croesus and oblivious to his treasures (pl.1) (see Fig. 3); the tyrant ■ Pittacus of Mytilene, his famous duel with the Athenian general Phrynon de­picted in the background (pl.2) (see Fig. 4); ■ Bias of Priene before a besieged city in flames (pl.3); ■ Cleobulus of Lindos, conducting a sacrifice in the back­ground (pl.4); ■ Chilon of Sparta, with a tournament taking place behind him (pl.5); the tyrant ■ Periander of Corinth, grasping in one hand a club, branch of laurel, and sceptre, and in the back­ground seated on his throne (pl.6); the astronomer ● Thales of Miletus, shown again in the background with his instruments (pl.7)

A mention of the matrices in the probate inventory of the wife of Pierre Mariette, Geneviève Le Noir (dated 12 August 1641), provides a terminus post quem for this suite of prints.10 A proof impression of ‘Solon’ before addition of the names of Vignon and Mariette is reproduced by Sophie Join-Lambert and Maxime Préaud (Bibliothèque nationale de France, Est Ed 30, rés).