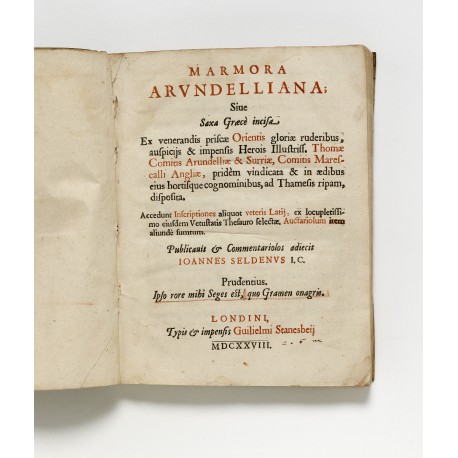 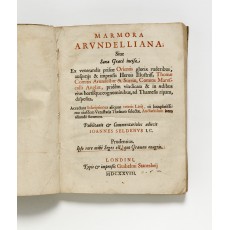 Description of the antiquities in the gardens of Arundel House
Selden (John), 1584-1654

First edition of Selden’s description of twenty-nine Greek and ten Latin inscribed stones in the collection of Thomas Howard, second Earl of Arundel (1586-1646). These had been acquired by Arundel from an agent in Symrna in 1626-1627, in competition with the Provençal scholar Nicolas-Claude Fabri de Peiresc. Selden’s book, prepared with help from the royal librarian Patrick Young (Junius) and Richard James (Cotton's librarian), spread the fame of the collection throughout learned Europe.

We are experiencing significant delays to a number of EU countries as a result of both new customs processes and ongoing Covid-19 measures
pdf (1 007.91 kB)
Print 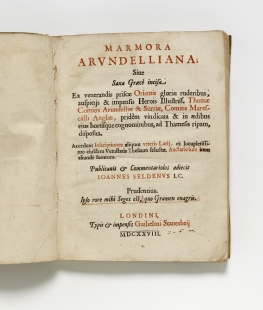 First edition of Selden’s description of twenty-nine Greek and ten Latin inscribed stones in the collection of Thomas Howard, second Earl of Arundel (1586–1646). These had been acquired by Arundel from an agent in Symrna in 1626–1627, in competition with the Provençal scholar Nicolas-Claude Fabri de Peiresc. Selden’s book, prepared with help from the royal librarian Patrick Young (Junius) and Richard James (Cotton’s librarian), spread the fame of the collection throughout learned Europe.2

The sculpture at Arundel House eventually extended to thirty-seven statues, 128 busts, and 250 inscriptions, as well as sarcophagi, altars, and fragments. Selden gives a general description of the entire collection; however the inscriptions and their historical implica­tions occupy most of his attention. He also comments on a group of Romano-British inscriptions that had been given to the Earl by William Camden, and on a number of stones inscribed with Hebrew found in the repairing of Aldersgate and acquired by Arundel. Selden suggests that the latter were part of a syna­gogue or fragments of a Jewish grave, of the late twelfth or early thirteenth century.3 ‘In his discussion of these Jewish sepulchral stones, Selden offers some­thing of a survey of Jewish life and law in medieval London, including data on the laws regard­ing Jewish goods, loans, mortgages, usury, and worship. Moreover, Selden writes plaintively of the exile of Jews from England, a tragedy that he believes too many English citizens have wholly forgotten’.4

Before the collection arrived at Oxford in 1667 (pre­sented to the University by the collector Earl’s grandson Lord Henry Howard, at the instigation of John Evelyn), about 115 of the inscribed stones were mislaid. The survivors obtained only partial protection there, most being inserted in the exterior walls of the Sheldonian Theatre, where large portions were utterly lost before copies of them had been taken. These circumstances greatly enhance the documentary value of Selden’s work.5

The sheets of this first edition were twice reissued in 1629 with a cancel title-page having the imprint of John Bill. About thirty copies of our 1628 William Stansby issue are located by the online English Short Title Catalogue, including five copies in North American libraries (Folger, Harvard, Huntington, Kansas, Yale).

1. Leonora Navari, Greece and the Levant: The Catalogue of the Henry Myron Blackmer Collection (London 1989), no. 1522.

2. Peiresc noted in a letter of 1629 that Marmora Arundelliana was already circulating in Rome, and that he had read it in Paris as soon as it came out; see Lettres de Peiresc, edited by Philippe Tamizey de Larroque (Paris 1888–1898), v, p.328. For Rubens’ praise of the collection and Selden’s work, see his letters to Pierre Dupuy and Peiresc (The Letters of Peter Paul Rubens, edited by Ruth Saunders Magurn, Cambridge, ma 1955, pp.320–323; Prosper Arents, De Bibliotheek van Pieter Pauwel Rubens: een reconstructie, Antwerp 2001, p.245 no. H74). Constantijn Huygens had seen Arundel’s collection and owned a copy (1629 issue) of Selden’s book (Catalogus… Bibliothecae… Constantini Hugenii, The Hague 1688, p.28 no. 41).

5. Selden is the sole witness (pp.1–21, 59–119) for the lost top half of the famous Parian Marble, which was broken up and part used for repairs at Arundel House during the Civil War; see the critical edition of Felix Jacoby, Das Marmor Parium (Berlin 1904), and generally, Adolf Michaelis, Ancient Marbles in Great Britain (London 1882), pp.17–18.