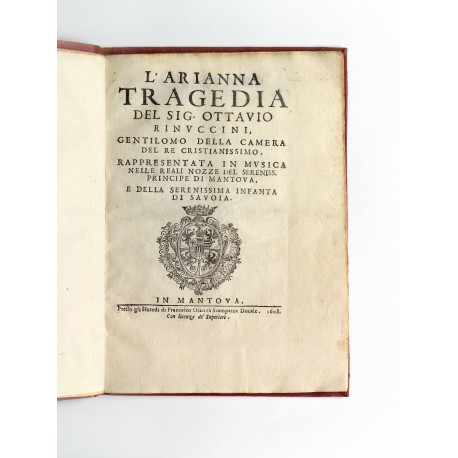 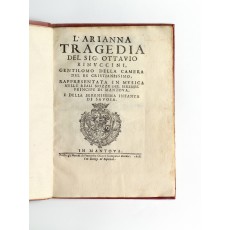 The libretto of Arianna, set to music by Monteverdi (his second opera), and performed on 28 May 1608 in the Sala degli Specchi in the Palazzo Ducale in Mantua, as the first entertainment of extravagant festivities there celebrating the marriage of the heir-apparent, Francesco IV Gonzaga, to Margherita of Savoy. This first edition, printed “Presso gli Heredi di Francesco Osanna Stampator Ducale”, may have been distributed before the performance, functioning as advertising for it and as an aid to following the action on stage. Only two copies can be traced in North American libraries ● Chicago, Newberry Library ● Washington, DC, Library of Congress. No other copy has appeared in the auction salerooms for at least fifty years, and the book is thus absent in several of the expected repositories (including British Library, Pierpont Morgan Library, and New York Public Library).

We are experiencing significant delays to a number of EU countries as a result of both new customs processes and ongoing Covid-19 measures
pdf (2.00 MB)
Print

Apart from a few spots, in very good state of preservation.

The libretto of Arianna, set to music by Monteverdi (his second opera), and per­formed on 28 May 1608 in the Sala degli Specchi in the Palazzo Ducale in Mantua, as the first entertainment of extravagant festivities there celebrating the marriage of the heir-apparent, Francesco iv Gonzaga, to Margherita of Savoy (the formal wedding had been in Turin on 19 February).2 Several versions of Arianna’s lament, ‘Lasciatemi morire’, are known, the only music from the opera to survive.3 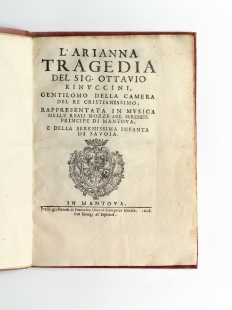 Image
The libretto of Monteverdi’s second opera, in its rare first edition (reduced from 220 × 158 mm) 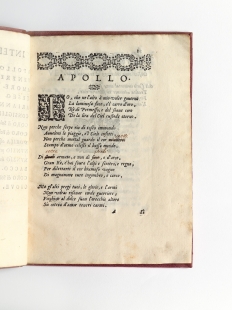 Arianna was immediately enshrined by contemporary theorists as an exemplar of what opera should be and of how music and poetry should relate to one another; modern scholars regard the work no less highly, but examine it in relation to contemporary rhetorical stud­ies, coming of age rituals, and in the context of gender and sexuality.4

Upon the success of his first opera, Orfeo, per­formed in Mantua during the carnival of 1607, Monteverdi was commissioned to write music for the Savoy-Gonzaga wedding.5 Rinuccini delivered a preliminary draft of the libretto to him in October 1607, and Monteverdi evidently wrote most of the music over the following two months. Both com­poser and librettist were in Mantua in February 1608, where they met with the superinten­dent of the festivities, Federico Follino, and others.

Their intention was to celebrate the wedding during the Carnival season, however in late February 1608, Monteverdi’s pupil, Caterina Martinelli, who was to take the title-role, contracted smallpox and died.6 A replacement for her was soon found in the comme­dia dell’arte actress Virginia Andreini, and a successful rehearsal of the entire work was con­ducted on 15 March.7 Rinuccini returned to Mantua in April 1608, apparently to super­vise staging, and possibly to supervise the printing of L’Arianna’s libretto and make any last-minute changes requested by the composer. The wedding ceremonies however were repeatedly postponed because of diplomatic difficulties.

When the bride arrived in Mantua on 24 May 1608, the festivities began immediately. They also fea­tured a performance of L’Idropica, a comedy by Battista Guarini with intermedi written by Gabriello Chiabrera, and a ‘Ballo delle ingrate’.

This is the first edition of the libretto, printed ‘Presso gli Heredi di Francesco Osanna Stampator Ducale’, and very probably distributed before the performance, functioning as advertising for it and as an aid to following the action on stage. Certain readings in the prologue – stressing the importance of the house of Savoy at the expense of the Gonzagas, referring to the bride’s father, Carlo Emmanuele i, as ‘Carlo immortal’ – suggest that it was printed at the expense of the Savoyards.8

A second edition, presenting the text actually heard at the performance (substituting refer­ences to the bride for those to her father), including stage direc­tions, occurs within Federico Follino’s commemo­rative account of the wedding festivities, printed by ‘Aurelio, & Lodovico Osanna Stampatori Ducal’ (i.e. after the transfer of Francesco’s press to those heirs) with a dedication dated 1 July 1608.9 Further reprints of the libretto at Florence10 and Venice11 appeared the same year (the ‘Carlo immortal’ read­ings are printed in these editions).

Until recently, scholars were unaware of the textual differences in the sources, and the text generally relied upon was Follino’s second edition, derived moreover not from the original, but from an inaccu­rate transcription first published in 1904 by Angelo Solerti.12 Only within the last ten years has the text offered in our first edition begun to be studied, an undertaking complicated by its relative inaccessibil­ity (there is no published transcription or facsimile).

This first edition is rare: just one other copy has appeared in the auction salerooms during the past fifty years,13 and the book is thus absent in several of the expected repositories (including British Library, Pierpont Morgan Library, and New York Public Library). Two copies of the edition are located in North American libraries

and thirteen copies are reported in Euro­pean libraries

2. Jessica Gordon, ‘Entertainments for the marriages of the princesses of Savoy in 1608’ in Italian Renaissance festivals and their European influence, edited by J.R. Mulryne and Margaret Shewring (Lewiston 1992), pp.119–140.

3. Printed in Monteverdi’s Il sesto libro de madrigali a cinque voci (Venice 1614), the first of his madriga­lian publications to appear after the first production, and subse­quently printed in a monodic version.

4. The extensive secondary literature is discussed in Suzanne G. Cusick, ‘“There was not one lady who failed to shed a tear”: Arianna’s lament and the construction of modern womanhood’ in Early music 22 (1994), pp.21–41; see further, essays by Tim Carter, Anne MacNeil, and Suzanne Cusick in Early music 27 (1999); and Anne MacNeil, Music and women of the Commedia dell’Arte in the late sixteenth century (Oxford 2003).

5. For an account of the events surrounding the creation of the opera, see Paolo Fabbri, Monteverdi, translated by Tim Carter (Cambridge 1994), pp.77–99.

7. Paoloa Besuitt, ‘The “Sala degli Specchi” uncovered: Monteverdi, the Gonzagas and the Palazzo Ducale, Mantua’ in Early Music 27 (1999), p.460, with a new dating (15 March 1608) and full tran­scription of a letter from Antonio Costantini to Duke Vincenzo Gonzaga con­cerning this rehearsal.