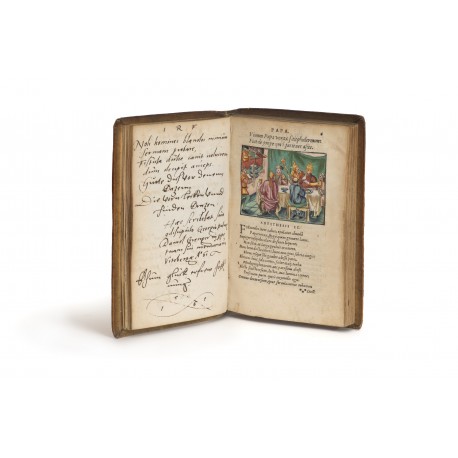 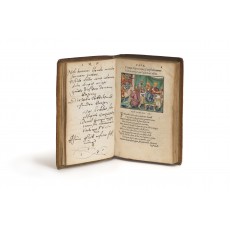 Album amicorum of the humanist-physician Georg Palma (1543-1591), in the form of a printed book, interleaved with blank paper for autograph inscriptions of his fellow-students at the university of Wittenberg, in the years 1561 to 1564. Hitherto unknown, this newly recovered Stammbuch is a significant contribution to our knowledge of Georg Palma's academic friendships – paternal friends, mentors, patrons, and fellow students. Academic alba amicorum of early date, emanating from Wittenberg, containing autograph entries from students who directly felt Melanchthon's influence, are few in number, and virtually unknown in the marketplace.

Interleaved by the binder (58 leaves; fragment of watermark: two towers, each with a single window, a gate between; letter ‘w’ in the base);1 inscriptions on 14 pages by ten friends of Georg Palma. 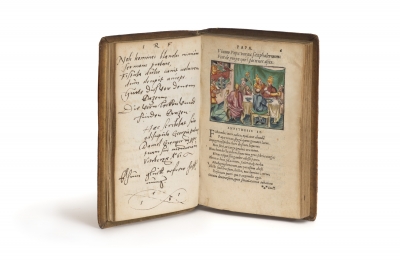 Album amicorum of the humanist-physician Georg Palma (1543-1591), in the form of a printed book, interleaved with blank paper for autograph inscriptions of his fellow-students at the university of Wittenberg, in the years 1561 to 1564.2 Hitherto unknown, this newly recovered ‘Stammbuch’ is a significant contribution to our knowledge of Georg Palma’s academic friendships – paternal friends, mentors, patrons, and fellow students.

The academic album amicorum (‘Gelehrtenstammbuch’) had evolved at Wittenberg, where Luther’s followers collected inscriptions in order to provide themselves with material links to the leaders of the Reformation. Students and clerics transmitted the custom to other centres of learning, and as the fashion spread beyond the universities the alba amicorum became less uniform. The original model was a small book, often Alciati’s Emblematum liber or Melanchthon’s Loci communes theologici.3 The chosen book was given blank interleaves by a binder; friends would select a blank page, according to the text or image opposite, for their contribution, usually a salutation accompanied by short epigrams or quotations culled from classical sources.4 The earliest extant album amicorum contains nineteen entries, including one by Philipp Melanchthon, dated at Wittenberg, 17 April 1545.5 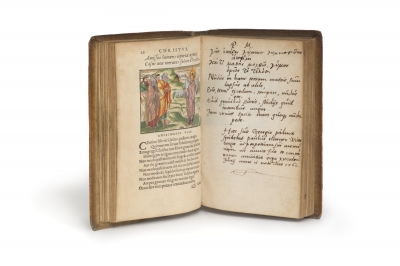 A description of the practice is attributed Melanchthon, the leading academic of the Reformation:

These little books certainly have their uses: above all they remind their owners of people, and at the same time bring to mind the wise teaching which has been inscribed in them, and they serve as a reminder to the younger students to be industrious in order that the professor may inscribe some kind and commendatory words on parting so that they may always prove themselves brave and virtuous during the remainder of their lives, inspired, even if only through the names of good men, to follow their example. At the same time the inscription itself teaches knowledge of the character of the contributor, and quite often significant passages from otherwise unknown and little-read authors are found in albums. Finally, they record biographical details which would otherwise be forgotten.6 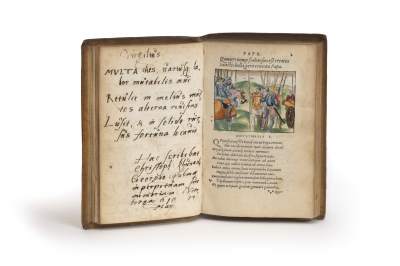 Image
Entry of an unidentified acquaintance of Georg Palma (Christophorus Kun of Halle?), 17 May 1561

Today, these alba are of considerable interest, systematically mined for biographical data of their owners and contributors, knowledge of university life of the times, literary trends, the meaning of ‘academic friendship’, and explored for evidence of intellectual and social networks.7 Academic alba amicorum of early date, emanating from Wittenberg, containing autograph entries from students who directly felt Melanchthon’s influence, are few in number, and virtually unknown in the marketplace.

Georg Palma matriculated in Wittenberg University on 30 May 1559,8 aged sixteen, and for next two years followed the obligatory foundation course, which emphasised mathematics and astronomy. Evidently influenced by Caspar Peucer (1525-1602), a humanistically trained professor of medicine, whose lectures he attended in 1563-1564,9 Palma decided to pursue a career in medicine. Leaving Wittenberg, he matriculated on 11 November 1564 at Tübingen University,10 to study under the famous botanist-anatomist Leonard Fuchs (1501-1566). Palma afterwards continued his medical studies at the universities of Padua11 and Ingolstadt;12 by 1568 he was practising medicine in Nuremberg, and soon was appointed municipal physician. 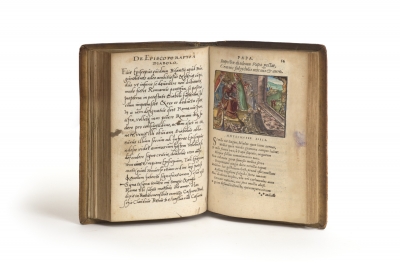 Before departing for Tübingen, Palma received farewell gifts from acquaintances,13 and collected autographs in his alba. Our volume contains ten commemorative inscriptions, of which three are dated 30 September 1564, and the others May to September 1561:

The entries are in Latin, with additions in Greek and in German, the texts mostly commonplaces in the humanist world, the salutations and expressions of friendship formulaic. They are nonetheless truthful self-portraits of the contributors, mementoes of their bond with the owner, Georg Palma, as well as one another. As in other alba amicorum of the period, the entries create a ‘composite mirror’ in which contributors, owner, and the ‘humanist ideal of friendship’ are all reflected.24 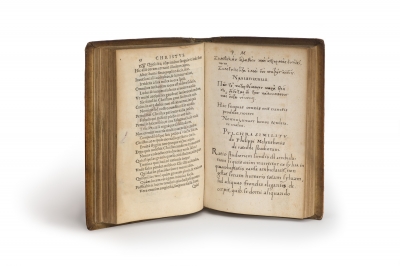 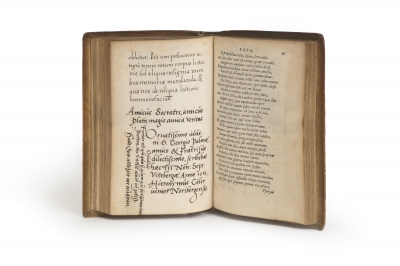 Our volume is preserved in the original pigskin binding. The upper cover is decorated by a panel depicting Pyramus and Thisbe, lettered ‘Amor nil moderabile suad[et]’, and on the lower cover is a panel of Venus and Cupid, lettered ‘Species mulieris multos’.41 This classical decoration is remarkable, considering the nature of the book inside, and also that Wittenberg binders since 1550 had strongly favoured panels depicting Luther and Melanchthon, and rolls showing Biblical characters or medallion portraits of Reformers.42

The bindings of the five alba in Stadtbibliothek Nürnberg display on their upper covers Palma’s initials (Georgius Palma Norinbergensis) together with the date of binding (1564 or 1565); several also contain Palma’s woodcut exlibris.43 The bindings on those alba appear to have been produced in different shops. One is decorated by an Adam and Eve – Moses with the Tablet – Crucifixion – Resurrection roll, employed with a Moses and the brazen serpent – Abraham and Isaac – Annunciation – Adoration of the Shepherds roll.44 Two others feature decoration of the Seven Liberal Arts and Virtues;45 Justice and Lucretia;46 and the latest of the five alba combines a Biblical roll (Christ – St Paul – St David – John the Baptist), a roll representing the personified virtues (Justitia – Cognitio – Temperantia – Fortitudo), and a Reformer roll (Martin Luther – Jan Hus – Erasmus von Rotterdam – Philipp Melanchthon).47

Although we have virtually no knowledge of Palma’s personal convictions, merely information gleaned from books in his library,48 it seems appropriate that the young undergraduate chose an anticlerical picture book, Antithesis de præclaris Christi et indignis Papæ, for his album amicorum.

The Antithesis instructs readers in Protestant doctrine through derogatory comparisons with Catholic teachings. Eighteen woodcut illustrations of the life of Christ are paired with eighteen woodcut images of parallel situations in the lives of the popes; the majority contrast Christ’s simplicity, humility, charity, and love of peace, with the Pontiff’s pomp, pride, avarice, and militarism. One pair, for example, contrasts an image of Christ washing the feet of his Disciples with one of courtiers kissing the Pope’s feet, juxtaposing Christ’s humility with the worldly vanity of the popes. Another pair depicts Christ labouring to carry his cross and the pope borne aloft on a splendid litter; a third pair teaches the reader the true meaning of Christ’s Last Supper and denounces the misuse of this ceremony in the Catholic Mass (images).

The work is based on a violently anti-Papal Lutheran satire originally published in German in 1521,49 reworked in 1533-1534 (the first illustrated book of the French Reformation),50 and now published with substantial additional verse by Du Rosier and new woodcut illustrations by Pierre Eskrich.51 At time of publication, Du Rosier was a teacher in the schola privata in Lausanne (1553-1557); he later became maître d’école at Gex (1558-1559), afterwards in the Académie de Lausanne.52 He dedicates his book to Hans Steiger and Hieronymus Manuel and appends his own translation of a sermon of Bernardino Ochino on the image of the Antichrist (originally printed, in French and Italian, at Geneva in 1544).

Very little graphic propaganda was produced during the growth period of the French Reformation; by one reckoning just eight prints or sets of prints circulated within France between 1530 and 1575.53 The printmaker and designer known as Pierre Vase, Cruche, or Eskrich (1518/1520-after 1590), executed two of these: the set of thirty-two Antithesis wood blocks (1557) and the gigantic, sixteen-block Mappe-Monde Nouvelle Papistique, a cosmography of the ‘papist world’ (devised in 1561, but not published until 1566; reprinted 1577). 54 The Paris-born son of a German engraver, a member of the Reformed faith, like his wife, Eskrich worked as a book illustrator for the publisher Guillaume Rouillé in Lyon, before emigrating to Geneva in 1552.55 Besides religious propaganda, he produced a view of Geneva for the Protestant leader Admiral Gaspard de Coligny (now untraced), and a series of watercolours of birds probably intended as models for book illustrations,56 while continuing to work for Rouillé and other Lyonnese publishers.

The Antithesis was surreptitiously published in 1557 by Zacharie Durant; in 1558, Durant re-issued the original sheets behind a new title-page.57 The same year, the Conseil de Genève banned the sale of the book, ordered the destruction of all existing copies, and sentenced Durant to three days in prison.58 Undeterred, he published surreptitiously in 1560-1561 two editions of a French translation. Individual blocks or pairs of blocks from the series were lent to Jean Crespin, to illustrate polemics published in 1557 and 1562.59 The set of woodblocks afterwards passed to the publisher Eustache Vignon, who issued editions in French and Latin in 1578, 1584 (French), 1600 (French).60

7. The bibliography on this topic is enormous; among recent contributions are Christian Coppens, ‘An album amicorum as a source of provenance’ in Bibliologia 5 (2010), pp.107-125; Bronwen Wilson, ‘Social Networking: the album amicorum and early modern public-making’ in Oltre la sefra pubblica / Beyond the public sphere: opinions, publics, spaces in Early Modern Europe (Bologna 2012), pp.1-19. A universal database of owners and inscribers of alba amicorum is under construction (RAA), also databases of Dutch (Alba Amicorum in Nederland) and Hungarian-related (InscriptionesAlborumAmicorum) alba, and of alba in particular collections: Gießen, HAAB Weimar, Göttingen, Koninklijke Bibliotheek, etc.

13. The ‘Abschiedsgeschenke’ were books published at Wittenberg in 1564, containing presentation inscriptions to Palma from their authors: Sebastianus Theodoricus (1520-1574), professor of mathematics at Wittenberg; Georg Mauritius (1539-1610), adjunct professor of philosophy at Wittenberg; and Pantaleon Candidus (1540-1608), Magister 1564. They were bound for Palma together with an uninscribed book of the same place and date, by Bartholomäus Schönborn, professor of mathematics and medicine at Wittenberg; the Sammelband passed with the rest of Palma’s books into the Stadtbibliothek Nürnberg (shelfmark Math. 8. 844; details). A Latin poem (33 lines) of Pantaleon Candidus was published as an ‘Abschiedsgedicht’: In honorem honesti iuuenis … domini Georgii Palmae Noribergensis Witeberga discedentis (1564); see König, op. cit. (1961), p.9 (locating five copies), and Schnabel, op. cit. (1997), p.11 (note 5).

24. Aneta Georgievska-Shine, ‘The Album amicorum and the Kaleidoscope of the Self’ in The Anthropomorphic Lens: Anthropomorphism, Microcosmism and Analogy in Early Modern Thought and Visual Arts (Leiden 2014), pp.179-207 (pp.184-185).

56. Roberta Olson and Alexandra Mazzitelli, ‘The discovery of a cache of over 200 sixteenth-century avian watercolors: a missing chapter in the history of ornithological illustration’ in Master Drawings 45 (2007), especially pp.456-457, 515-516 (‘Appendix: further biographical notes on Pierre Vase’).

63. John Fletcher and Rose Smith, A Short-Title Catalogue of Sixteenth Century Printed Books held in Libraries and Private Collections in New South Wales, with a list of provenances (Sydney 1979), no. 1726.

64. The Bibliotheca Palatina copy was used for microform reproduction: The printed books of the Biblioteca Palatina, edited by Leonard Boyle and Elmar Mittler (Munich: K.G. Saur, 1989-1996), no. F5177.