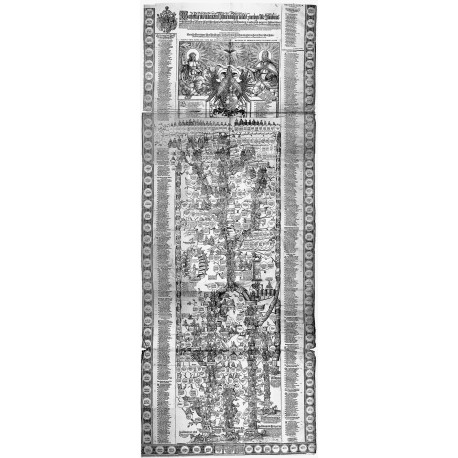 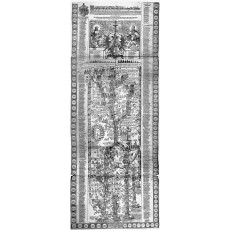 This monumental woodcut printed by forty-two blocks on nineteen assembled sheets (dimensions overall 236 × 91 cm) is a pictorial genealogy of some thirty generations of the Braunschweig-Lüneburg dynasty, displayed in the form of a tree with half-figure portraits of family members hanging like fruit on its branches. At the top is an imposing headpiece of an Emperor flanked by God the Father and His Son, certifying the authority and divine grace conferred upon the family. The print is dedicated to the “newest growth” on the tree, Heinrich Julius von Braunschweig-Lüneburg-Wolfenbüttel (1564-1613), the nineteen or twenty year-old son of the reigning duke. Work on the print commenced in 1582, when Herzog Julius summoned the blockcutter Georg Scharffenberg to Wolfenbüttel, and appointed him “Formschneider” at his court. Besides the impression here described, four other complete and three incomplete or fragmentary impressions can be located.

We are experiencing significant delays to a number of EU countries as a result of both new customs processes and ongoing Covid-19 measures
pdf (3.55 MB)
Print

(sheet 1) ‘title’ and dedication to Heinrich Julius von Braunschweig-Lüneburg-Wolfenbüttel, both printed by letterpress (sheet 19.2 × 54.5 cm)1 — (2) woodcut ‘head-piece’ depicting an Emperor seated between God the Father and Jesus Christ (block 40 × 52.5 cm), with a caption above in letterpress ‘Rerum unus pater est, unus qui cuncta gubernat | Hic dedit et phoebo radios, et cornua Lunæ’ and below two columns of printed verse (sheet 41.5 × 54.5 cm)2 — (3)–(6) woodcut genealogical tree with printed captions (each of the four blocks circa 43 × 57 cm; the sheets of same dimensions) — (7)–(19) woodcut border along sides and bottom, the border composed of 34 woodcuts of which there are two designs (one with four blank roundels per block, and matching block with single blank roundel, used on the right and identifying 56 bishops of Minden within the roundels; the other with three roundels per block, and matching block with single roundel, used on the left and identifying 44 bishops of Halberstadt within the roundels; the blocks of both designs 19 × 6 cm and 5 × 6 cm), in bottom centre a woodcut compartment (block 6 × 16 cm) enclosing letterpress captions for the border roundels and the imprint,3 and on the same sheets as the border the woodcut heraldic insignia of Herzog Julius (upper left, block 14 × 11 cm), a printed dedication to Heinrich Julius in Latin distichs (upper right, sub­scribed Heimbertus Oppechinus),4 and along both sides biographies of 20 of his ancestors in German distichs with heading ‘Erklerung des Stammbaums der Hochlöblichen Fürsten zu Braunschweig und Lüneburg’ (six sheets used per side, each sheet circa 40.5/43 × 175 cm; the bottom sheet 6.5 × 57 cm).

watermark a crown, beneath which are three ribbons (or letter m?), centred between two chain lines (40 × 40 mm)

condition three lateral folds, of which two splitting with minor losses of image consistent with use; previous single centre fold, with a minor loss of image at intersection with top lateral fold; paper of centre panels lightly browned; some edges and folds partly strengthened on the back with old paper

Preserved folded in a portfolio.

A pictorial genealogy of some thirty generations of the Braunschweig-Lüneburg dynasty, displayed in the form of a tree with half-figure portraits of family members hanging like fruit on its branches. At the top, given precedence, is an imposing headpiece (40 × 52.5 cm) of an Emperor6 flanked by God the Father and His Son, certifying the authority and divine grace conferred upon the family. The print is dedicated to the ‘newest growth’ on the tree, Heinrich Julius von Braunschweig-Lüneburg-Wolfenbüttel (1564–1613), the nineteen or twenty year-old son of the reigning duke.

The prototypes of this large print, almost 2 ½ metres high, were monumental woodcuts representing the genealogy of the houses of Hapsburg (by Hans Burgkmair,7 Robert Peril,8 and Jörg Breu the younger),9 Wittelsbach (by the team of Jacob Clauser, David Kandel, Zacharias Specklin, and others),10 Mecklenburg (by Jakob Lucius),11 and Württemberg (by Jacob Lederlein).12 The earliest of these prints were instruments of self-propaganda, bolstering political legitimacy by showing a venerable and unbroken line of succession, and were commissioned and distributed by the ruler. Later prints, including the present one, were commercial undertakings, and intended for a larger audience. Although their pro­duction was doubtless greater, display of the prints as wall hangings has destroyed all but very few examples.13

At the bottom of the print are five trees, representing (from left) the Merovingian and Carolingian lines, the house of Este, the house of Welf (Guelph), and the house of Billung of Saxony. The first ancestors claimed by the family are shown resting at the base of each trunk: Sigibert iii (631–656), an Austrasian king of the Merovingian line;14 Pepin ii (c. 635/645–714), ruler of the Franks;15 Gundelard (d. 682), son of Valerian of Este, Lord of Feltri;16 Welf i (died 825), count of Altorf, the oldest known member of the house of Welf (Guelph);17 and Hermann Billung (c. 900/912–973), margrave of Saxony.18 The two main lines (Merovingian and Este) become entwined in the person of Heinrich der Stolze (c. 1102/1108–1139), and culminate in Herzog Julius von Braunschweig-Lüneburg (1528–1589), who is shown with his wife Hedwig von Brandenburg (1540–1602) and half-figure portraits of their eleven children (the dedicatee, Heinrich Julius, is third from left).

Work on the print apparently commenced in 1582 and was completed in 1584.19 The latest information contained in the print is the marriage (6 May 1583) of Elisabeth von Braunschweig-Wolfenbüttel and Adolf xi von Holstein-Schauenburg and the birth (23 June 1583) of Johann, fourteenth child of Wilhelm der Jüngere, Herzog zu Braunschweig-Lüneburg-Celle. All known copies have an imprint dated 1584 naming as participants in the venture Konrad Horn, Hofbuchdrucker since 1551; Franz Algermann (1548/1549–1613); and Georg Scharffenberg (c. 1525/1530–1608). External evidence indicates that the Bauverwalter Paul Franke (c. 1538–1615) and the Hofrat Abel Ruck also were involved.

Born in Celle, Franz Algermann studied in Wittenberg and Strassburg, and arrived at the Wolfenbüttel court in 1575, where he obtained appointments as a clerk and musician. The unsigned verses incorporated in the border of the print, describing twenty ancestors of Herzog Julius, are credited to him.20 Algermann later wrote an ‘Erklärung’ of the Stammbaum in the form of a dialogue; it remained unpublished.21

Georg Scharffenberg was the eldest son of the blockcutter and printer Crispin Scharffenberg (c. 1505–1576). He commenced his career in Görlitz, producing in 1565 a large view of that city after a drawing by Joseph Metzker,22 and worked thereafter in Frankfurt an der Oder. He was in Dresden on 13 July 1582, when Herzog Julius summoned him to Wolfenbüttel to work on this print;23 later in the same year, he was appointed Formschneider at court.24

The sources of Scharffenberg’s portraits have yet to be identified;25 since he was a portrait­ist, contemporary members of the court – Herzog Julius, his wife, and children, in particu­lar – may have been drawn by him from life.26 Similarly, the ‘Löwendenkmal’ (Domplatz, Braunschweig), positioned on the print next to Heinrich der Löwe (1129–1195), who had erected it in 1172, may depend from Scharffenberg’s observation of that monument.27 The white horse (Sachsenross, or Welfenross) within a border signifying the territories con­trolled by Heinrich der Löwe, depicted opposite, accords with a literary description pub­lished in 1584.28

Besides the impression here described, four other complete and three incomplete or frag­mentary impressions can be located. Differences between the prints indicate multiple issues over time. The ‘title’ of the Göttingen copy varies slightly from all other examples; whether it is an earlier or later setting, can not at present be established. 29 Our impression is most closely affiliated with one in the Herzog August Bibliothek in Wolfenbuttel (Sig. Graph. a4:19). That impression however has four paste-on cancels which are not present in ours: two cancels in the ‘title’30 and two in the borders enumerating the bishops of Halberstadt and of Minden.31 The absence of cancels is usually suggestive of an early issue date. 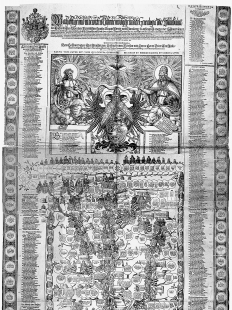 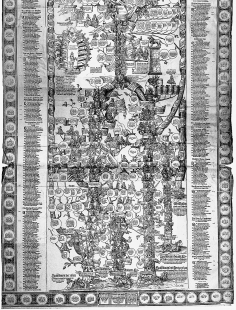 The other of the two impressions in the Herzog August Bibliothek (Graph. a4:18) repre­sents an issue of the print five or six years later, after the death of Herzog Julius (3 May 1589). The print has been brought up-to-date by cutting new portraits for the top of the tree. These depict the new Herzog Heinrich Julius flanked by his (first) wife Dorothea von Sachsen (1563–1587) with their daughter, Dorothea Hedwig (1587–1609), and by his sec­ond wife, Elisabeth von Dänemark (1573–1625); a row of ten empty roundels represents their future children. The title and dedication are reprinted and a new ‘head-piece’ featuring royal Danish and other insignia is employed.32 An issue date of 1590, after Heinrich’s mar­riage (19 April 1590), but before the birth of his son, Friedrich Ulrich (5 April 1591), is likely.

Another issue (or edition?) of the print is represented by four small fragments in the Niedersächsisches Landesarchiv – Staatsarchiv Wolfenbüttel. These fragments show four consecutive generations of the family: Wilhelm von Lüneburg (1184–1213) and his wife, Helena von Dänemark (c. 1180–1233); their son, Otto das Kind, Herzog von Braunschweig and Lüneburg (1204–1252) and his wife, Mathilde von Brandenburg (c. 1210–1261); their son, Albrecht i der Große, Herzog zu Braunschweig-Lüneburg (1236–1279) with his first wife Elisabeth von Brabant (d. 1261) and second wife Adelaide von Montferrat (d. 1285); and the latter’s son Albrecht ii, Herzog zu Braunschweig-Lüneburg and Fürst von Braunschweig-Wolfenbüttel-Göttingen (1268–1318) and his wife Rixa von Werle (d. 1317). The woodcut portraits are printed from different blocks than those used for the other impressions; the printed captions are also different.33

5. Both cancel slips (Azo i and Wilhelm) are present on Wolfenbüttel, HAB Graph a4:19 and Graph a4:18; and also on the impressions in Städtisches Museum Göttingen and Kupferstichkabinett Berlin.

7. A project presenting the genealogy of the Emperor Maximilian was initiated by Konrad Peutinger in 1510–1512: 77 woodcuts were completed by Hans Burgkmair (out of a planned 92) before it was abandoned; see Larry Silver, Marketing Maximilian: the visual ideology of a Holy Roman Emperor (Princeton 2008), pp.41–44 etc.