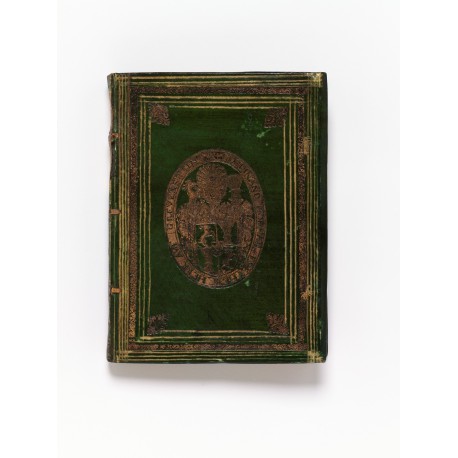 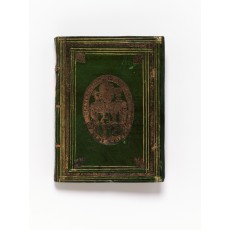 A lavishly illustrated description of the triumphal entry into Brussels on 18 January 1578, of Archduke Matthias of Austria (1557-1616), brother of the Emperor Rudolph, to take his oaths as Governor-General of The Netherlands, and of festivities during the days following. Our copy was bound for Ferdinand Hoffmann, baron of Grünpühel and Strechau (1540-1607), whose library comprised at his death more than ten thousand volumes, the modern acquisitions ordinarily bound in green-stained vellum, as here.

Also in the volume is a verse translation by Houwaert of the famous speech delivered (in Latin) on 7 May 1578, by Philippe de Marnix de Sainte Aldegonde (1540-1598), before a delegation of the Diet (Reichstag) of Worms, a fruitless appeal to gain the German princes to the cause of the States-General against the Spanish. Of this work, only five other copies are known.

quarto (192 × 142 mm), (84) ff. signed A–I8 K4 L8 (blank L8) and paginated 1–174 [i.e. 166, pp.145–148, 156–160 passed over; here folio E5 recto correctly paginated ‘73’ although the numerals either have slipped in the forme, or are hand-stamped] (2). Plantin’s ‘Labore et Constantia’ device on title-page (Voet no. 21), woodcut of Archduke Matthias’s armorial insignia within a border (152 × 117 mm), woodcut of the Archduke on horseback passing through a triumphal arch (156 × 120 mm), a series of twenty-four numbered woodcuts (of the same size) de­picting stages set up in the streets along his route, a similar series of seven (unnumbered) woodcuts of stages, thirty-four woodcut cartouches (by repeti­tion of twelve blocks), decorative and historiated initials, tail-pieces. Printed in roman, italic, gothic, and civilité types.1 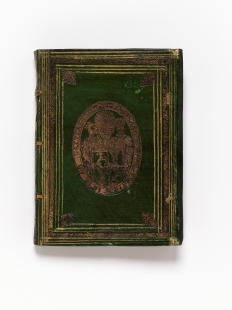 Image
Binding for Ferdinand Hoffmann, baron of Grünpühel and Strechau (1540–1607)

A lavishly-illustrated description of the triumphal entry into Brussels on 18 January 1578, of Archduke Matthias of Austria (1557–1616), brother of the Emperor Rudolph, to take his oaths as Governor-General of The Netherlands, and of festivities dur­ing the days following. The author, who held the title of Counsellor and Master in Ordinary of the Exchequer to the Duchy of Brabant, was present at all the events described, as master of ceremonies, and writer of the dra­matic dialogues performed by Rederijkers (rhetori­cians) at a banquet in the Stadhuis.3

The book commences with an account of Matthias’s arrival at Vilvoorde, where he was met by the Prince of Orange and other notables, and his proces­sion to the Louvain gate accom­panied by musicians playing shawms, cornettos, and other instruments, illustrated by a fine large woodcut of Matthias on horseback, together with nine members of his reti­nue on foot, passing through a triumphal arch festooned with armorial insignia. In the Ridderstrate, Matthias was greeted by representatives of the ‘nine nations’ of Brussels, and conducted along streets illuminated by flaming torches (although it was mid-day) and garlanded with fruits and flowers (although it was January) to the Grote Markt, where he enjoyed tableaux vivants presented by the most beautiful young women in the city.

A series of twenty-four numbered, full-page woodcuts record these tableaux, as well as the architecture and painted decoration of the ephemeral stages. Each stage was individually dedicated to a goddess of the Roman pantheon, chosen to personify the virtues and qualities which Matthias possessed, or was expected to possess. Rhyming verse written in ‘groote capitael letteren’ on the architectural façades (and transcribed in our book) summarised the allegories: Juno presenting Matthias with the city of Brussels, which she held, beautifully modelled in her hand; Cybele giving him the keys; Reason handing him a bridle; Hebe a basket of flowers; Wisdom a looking glass and two law books; Dili­gence a pair of spurs; while Constancy, Magnanimity, Prudence, and other virtues, furnished him with a helmet, corslet, spear and, shield. On other stages, Bellona presented Matthias with men-at-arms; Fame gave him her trumpet, and Glory her crown.

Then follow seven unnumbered woodcuts recording tableaux vivants of an historical rather than allegorical nature, presented on more elaborately decorated ‘tanneelen’ (these stages were ornamented in silver and gold, with prosceniums of simulated marble). In six pictures, Matthias was compared to the young Roman hero Scipio Africanus, who defeated the Carthaginians under Hannibal, and explicitly invited to free the Netherlands from the oppression of Don Juan, and restore liberties, rights and privileges. The seventh and final picture represents the legendary hero of ancient Rome, Marcus Curtius, plunging into the yawning abyss in order to save his people from pestilence.

At least one tableaux of this series, Scipio’s coronation, was enacted to music: a song enti­tled ‘Ghelijckerwijs vol rouwen, Sadt t’volck van Israel’, in which the Israelites in Babylonian exile serve as a prefiguration of the Low Countries under the Spanish yoke, was performed ‘met diuersche stemmen wel soo harmonieus al oft Parthenope, Lugia en Leucasta daer jegenwoordich hadden geweest’ (folio F3 verso, the song is then printed as fourteen stanzas of four lines each). It has ‘the same rhyme scheme and metrical feet as the song Wilhelmus van Nassouwe [now the national anthem of The Netherlands] and was very probably sung to this melody’.4

None of the woodcuts in the book is signed, however they are widely attributed to Antoon van Leest (circa 1545–1592), a cutter working for Plantin since the mid-1560s, who made blocks for the illustrations in other publications by Houwaert.5 It is suggested that one of these woodcuts was utilised by Van Dyck when composing ‘The Continence of Scipio’ (Christ Church, Oxford).6

The next day Mathias took his oaths as Governor-General, to support the new constitution, while the Prince of Orange was sworn in as Lieutenant-General and Governor of Brabant. The various speeches, addresses, announcements, and oaths, are printed, together with the prologue and text of ‘Vonnisse van Minos’, a ‘tafelspel’ adapted by Houwaert from Lucian’s ‘Mortuorum Dialogi xii ’, which was presented by the Chamber of Rhetori­cians ‘Het Mariacransken’ (Garland of Mary) at a banquet in honour of Matthias. 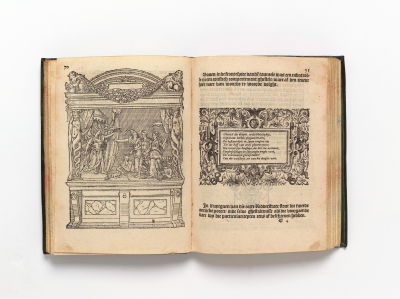 The play begins as a dialogue between two speakers named ‘t’Verlanghende herte’ (Desir­ing Heart, a burgher) and ‘Ghemeynen troost’ (Common Com­fort, a cleric), after which Alexander, Hannibal, and Scipio make their appearance, and begin to argue before Minos, judge of Hades, about which one of them had most excelled by his deeds.7 Contrary to Lucian’s text, Houwaert has Minos ruling in favour of Scipio, because his achievements were not inspired by a search for personal honour. The ‘Epitaphie van Scipio’ which con­cluded the per­formance is fol­lowed (folio K4 recto) by the appro­batio, dated 21 October 1578, and privilege, dated 13 December [1578].

But Houwaert evidently insisted on an addendum: incidental information about the banquet – the kinds of confectionary served, including one in the shape of the Netherlands lion; the instrumental music played, etc. – and the text of a comic dialogue, are printed on six leaves (quire L), approved by the censor on 19 December 1579 (Voet thus speculates that the book did not appear until early 1580). This appended dialogue, between Annius and Leucius, entitled ‘Vremdt Bescheedt’, was silently adapted by Houwaert from an unpub­lished work of Cornelis Crul, itself derived from Erasmus’ ‘Apros­dionusa, sive Absurda’.8

These copies are located by the writer in public collections

Our copy was bound for Ferdinand Hoffmann, baron of Grünpühel and Strechau (1540–1607), whose library comprised at his death more than ten thousand volumes, the modern acquisitions ordinar­ily bound in green-stained vellum, as here.12 A substantial portion of the library passed into the pos­session of the Princes von Dietrichstein and remained in Moravia until sold by Gilhofer and Ranchburg, at Lucerne, in 1933 and 1934 (the pre­sent volume was sold on 23 November 1933 as lot 127). 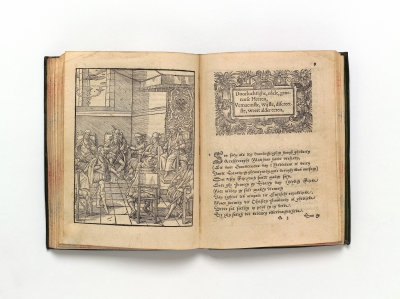 Only edition of this verse translation by Houwaert of the famous speech delivered (in Latin) on 7 May 1578, by Philippe de Marnix de Sainte Aldegonde (1540–1598), before a delegation of the Diet (Reichstag) of Worms, a fruitless appeal to gain the German princes to the cause of the States-General against the Spanish.14

In his Oration, Marnix defended the revolutionary appointment of Archduke Matthias as Governor (8 December 1577), in cooperation with a Council of State, a gross subversion of the authority of Philip ii. He recounted all the mischief committed by Don Juan and argued that the privileges of Brabant gave the States-General (and every individual citi­zen) the right to disobey not only a governor, but also the prince himself if he violated the privi­leges.

Marnix’s oration is rendered by Houwaert in 156 stanzas of eleven lines, and concludes with a note attesting that the text has been corrected against the Latin. It is, however, a rhetorical translation, not a faithful one: where Marnix invokes the ‘law of na­ture’, which had ‘imprinted in the hearts of all ani­mals the charge and care of their survival and health’, Houwaert diverges from the origi­nal ora­tion, connecting the law of nature with the mainte­nance of the privileges, as an explanation for why the States had taken up arms (folio D3 recto).15

The first edition of the Oration was printed by Plantin in June 1578, by order of Nicasius de Sille, Secre­tary to the Privy Council;16 a French translation, made by Marnix himself, ap­peared soon thereafter.17 Both editions were printed in smaller, octavo format, and neither features the fine illustration signed with the mono­gram of Antoon van Leest which appears in Houwaert’s edition. This woodcut is the earliest known portrait of Marnix.18 No subsequent use of it is recorded.

These copies are known to the writer

10. Hester Black, A Short Title Catalogue of the Emblem Books and Related Works in the Stirling Maxwell Collec­tion of Glasgow University Library (Aldershot 1988), no. 614.