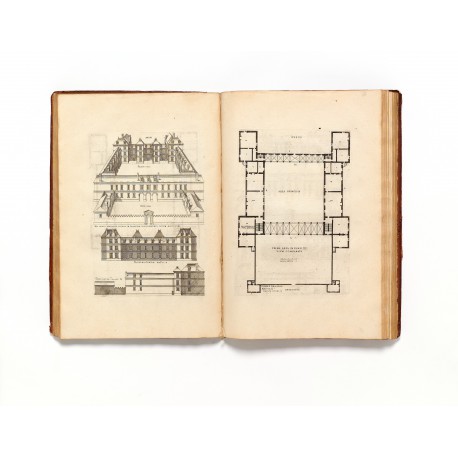 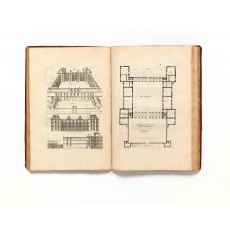 This is the first of three extensive books on house-building published by Androuet du Cerceau. It was issued by the same printer in the same year under the title Livre d’Architecture… contenant les plans et desseings de cinquante bastiments tous différens. As often, it is found here with the author’s Second Livre d’Architecture, in which designs for chimneys, window surrounds, doors, fountains, wells, garden pavilions, and funerary monuments, are provided. The once-fine binding of our copy is characteristic French work of about 1570 decorated in gilt with centre- and corner-pieces, and a complex monogram on both covers, which we dismember into the letters A B C E M N O R S T. It could be standing either for a motto or for a name.

We are experiencing significant delays to a number of EU countries as a result of both new customs processes and ongoing Covid-19 measures
pdf (1.03 MB)
Print

The binding is dilapidated, but in entirely original state: leather in top compartment of the spine detached and lost, leather in bottom compartment partly detached; edges and corners worn; covers abraded and rubbed.

binding contemporary French calf, covers decorated in gilt by a frame of double rules, centre- and corner pieces, with owner’s monogram stamped in middle of centrepiece and at angles of the frame (see below), back divided into seven compartments by raised bands, and decorated by repeated gilt quatrefoil ornament, Architec | ture | de Du | Cerceau lettered in second compartment; gilt edges.

A collection of fifty model designs of houses presented as ground plans, elevations and sections (171 figures on sixty-nine plates), with brief explanatory texts on each project located at the start of the book. The designs, among the earliest of domestic archi­tecture published anywhere in Europe, are highly varied, including plans of townhouses for merchants, hôtels particulier, and country châteaux with and without fortifications, some of the latter fanciful large-scale buildings based on geometrical forms (circle, triangle, penta­gon) and one in the form of a capital h (project xlvi) in honour of the dedicatee, Henri ii (reigned 1547–1559).

The projects are organised according to a calculation of their size in ‘Orgyia Gallica’ (toise), the statutory unit of measurement (1.959 metres, each ‘diuiditur in pedes sex’), as the cost of building was generally reckoned on the price of the walls according to their length, height and depth. The first and cheapest house spans a site about twenty-two metres in width and has a total of 539 toises, 16 pieds; the largest scheme at the end of the book has 9110 toises.4 By a royal edict of 1557, decorative elements such as pilasters, friezes, and cornices, were specified and accounted in a separate contract with the master mason. Architectural decoration is therefore rarely suggested here, even in the large projects, while the use of the rooms – even the position of the bed5 – is firmly specified.

Although Du Cerceau employs Vitruvian terminology – Ichnographia, Orthographia, Scaenographia – he does not labour his dilettante readers with a theoretical discourse; in­stead, he makes his appeal through the language of images. All the projects are rendered legibly and without constraining the imagination of the audience. Shown without subsidiary buildings or topographical context, the plans seem to float on the page – an effect Françoise Boudon calls ‘impression d’utopie’6 – allowing the patron to freely apply his individual needs and taste. With minor alterations, such as the relocation of stables, many of the schemes are suitable equally for a château or hôtel.

This is the first of three extensive books on house-building published by Du Cerceau. It was issued by the same printer in the same year under the title Livre d’Architecture... contenant les plans et desseings de cinquante bastiments tous différens. In both editions, the inscriptions on the plates are in Latin, an indication of the social status of the readers Du Cerceau hoped to attract in the domestic French market, and of his ambition to establish his reputation – and project French taste – far beyond.

The absence of illustrations of the decorative details needed to ornament these structures is remedied in Du Cerceau’s second book on house-building, published two years later, jointly by the author and the publisher André Wechel, again in Latin and in French (the French edition is present in our volume). 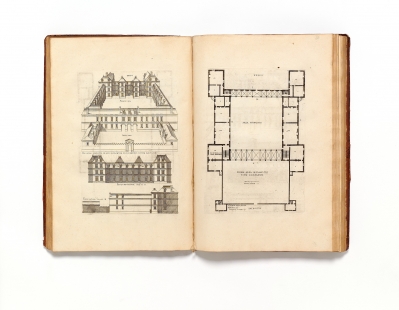 The Second Livre d’Architecture is organised in seven parts, providing unnumbered designs for chimneys, window surrounds, doors, fountains, wells, garden pavilions, and funerary monuments. The variety and virtuosity of the chimney designs especially has given rise to the suspicion that the Second Livre is plagiarised from other designers (else­where Du Cerceau borrowed extensively from Serlio).7 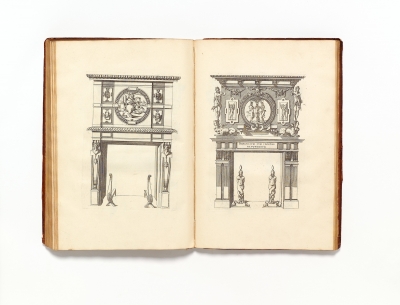 The only letterpress in the Second Livre is a bifolium with the title, an undated address ‘Au Roy’ (Charles ix, reigned 1560–1574), and a single page of text announcing the seven sec­tions of plates. The imprint on the title-page ‘De l’imprimerie de André Wechel’ (or, in some copies, ‘Imprimé pour Jacques Androuet Du Cerceau’), like the colophon of Benoît Prévost in the earlier volume, indicates only that Wechel and Prévost printed the letter­press; the plates for both books were printed by Du Cerceau himself. Examination of multi­ple copies proves that Du Cerceau ordered from his printers substantial quantities of the letterpress and printed the plates himself as demand required. The dates 1559 and 1561 on the title-pages thus can not be construed as the actual dates of issue.

A common feature of matrices produced in the Du Cerceau atelier is their swift deteriora­tion (through heavy use or by mishandling), evidenced by the opening of cracks in the cop­per, steady diminution in size, ‘clipped’ corners, and so forth. Within just a few years, some of the sixty-nine matrices in the De Architectura / Livre d’Architecture set had become unusable, and replacements engraved. In our volume, four prints are taken from substitute matrices: plate ia (in the copy, a room description is elaborated and further designations added, viz. on the ‘Secunda Ichnographia’ vestiarium replaces v.); iv (in the copy, garlands beneath the windows on the ‘Facies Posterior’ are deleted); x (in the copy, the direction of the print is reversed, so that on the ‘Facies Anterior’ the statue to right of the entry has a raised hand); xxxiv b (in the copy, seven façades lettered f–l are shown, whereas in the original, four façades of different design are shown).8

The idea of engraving a project number on each plate to facilitate reference to the prefatory letterpress did not occur immediately. A copy of the Livre d’Architecture is reported with all the plates before addition of numbers,9 while other copies are a mixture of unnumbered and numbered plates,10 with the appropriate numerals hand-stamped in type in the upper margins where necessary. Copies of De Architectura with similar mixtures of unnumbered and numbered plates also are known and the repeated claim that the Livre d’Architecture precedes De Architectura demands further testing. In our copy of the Latin edition, all the plates have numbers engraved in the matrices and paper evidence suggests a date of issue circa 1564–1571.11

Most copies of the Second Livre d’architecture contain sixty-six engraved plates, including one showing the flue inside a chimney, and another a variety of plans of fountains; neither plate is found in our copy, and there are no signs that they ever were present. Since the prefatory letterpress specifies only ‘vingt ordonances de chiminees’ (all of which are in our copy), the plate of the chimney flue may be a later addition, not part of the book as origi­nally conceived.12 The plate of fountain plans, however, is called for in this letterpress (‘six Fonteines, auec le plan racoursy de chascune d’icelles’).13 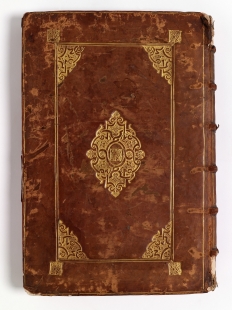 The once-fine binding of our copy is characteristic French work of about 1570 decorated in gilt with centre- and corner-pieces. A complex monogram is repeated on both covers, which we dismember into the letters a b c e m n o r s t. It could be standing either for a motto or a name.14 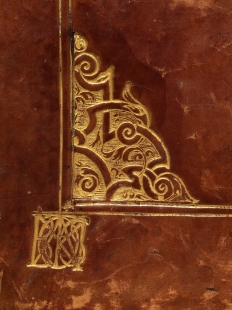 5. Monique Chatenet, ‘Cherchez le lit: the place of the bed in sixteenth-century French residences’ in Transactions of the Ancient Monuments Society 43 (1999), pp.10–11, figs.2–3.

9. Copy in the American Institute of Architects, cited by Elizabeth Baer in The Fowler architectural collection of the Johns Hopkins University (Baltimore 1961), p.18.

11. The majority of the plates in our copy are struck on a paper displaying the ‘two columns’ watermark registered by its manufacturer, Edmond i Denise, in 1564; the version of the watermark seen in our copy is recorded in papers used between 1567 and 1571 (Le Clert, op. cit., ii, p.305).

13. This plate is also an interpolated leaf in the Avery Library copy (inserted after folio 41).