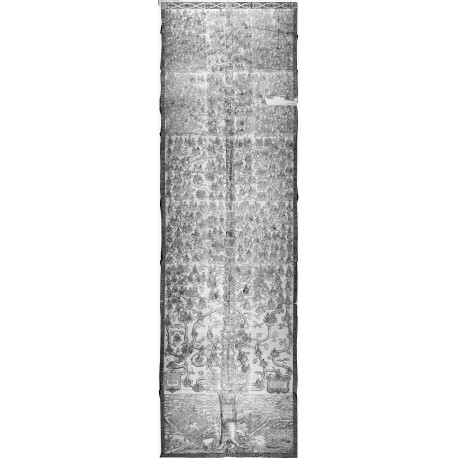 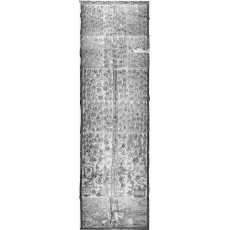 This large format woodcut, printed on twenty-one sheets and when assembled (as here) measuring over four metres high, is a family tree of the Wittelsbach dynasty over 1000 years, beginning with the Merovingian King Clovis I (466-511), and culminating with the Elector Palatine Friedrich II (1482-1556) and his wife Dorothea of Denmark. Also shown are the Bavarian and Palatine branches of the house (from Charlemagne to Charles V) and the Electors of the Rhineland Palatinate. Altogether, 934 half-length portraits and coats of arms are depicted. The wood blocks are signed by six draughtsmen or cutters: Jacob Clauser, David Kandel, Zacharias Specklin, Ieremias Wyssenbach, and two unidentified artists, one signing with the monogram HS with a pen or brush, the other with the monogram C with a cross and pen or brush.

We are experiencing significant delays to a number of EU countries as a result of both new customs processes and ongoing Covid-19 measures
pdf (4.97 MB)
Print

(Sheet 1) landscape view representing towns associated with the supposed founders of the house (names in italics are lettered in the blocks; battlefields are marked in the print by Θ): Noyon (Noviomvs), River Leye (Lysa, Fl. Loyse), Soissons (Soysson, Vessionvm), River Aisne (Isara, Fl. Aise), a fortified encampment, Θ Gwisen, and Clotilda, wife of Clovis and their son, witnessing the baptism of Clovis; signed left with monograms of Jacob Clauser and Ieremias Wyssenbach — (2) Θ Dvrmey, River Marne (Matrona, Fl. Marne), Reims (Θ Dvrocotervm Rens), Espernal (Asprenciacvm), River Maas (Meuse) (Die Mas), Sittard (Zitart), Roermond (Θ Rvrae Conflventes), Gelleren, at left of the base of the tree is a scene depicting the baptism of Clovis by St Remigius, in centre a fantastic figure (tricephalus) supporting an heraldic shield, at right a battle formation, and hanging on the trunk is an ornamental cartouche lettered with two inscriptions;1 signed above the cartouche by Wyssenbach and below by Clauser — (3) Tongres (= Aduacam Tungrorum, Atvacvm), Zülpich (Θ Tolbacvm), Aachen, or Heeren? (Ach Coriovalvm), Gelduba (Gldvba), Ellebach (Fl. Dgelbach), Düren (Θ Marcodvrvm), Jülich (Ivliacvm), Silva Ivliac., Vbii (= Ara Ubiorum, capital of the Ubii tribe?), Vetera Castra (Castra Vetera), Cologne (Θ Colonia Agrippina), the River Rhine (Rhenvs), Neuss (Novesivm), Deutz (Divitense Mvnimentvm); signed by Clauser and Wyssenbach (latter monogram with 3 · ) — (4)–(21) woodcut genealogical tree with captions cut in the blocks: on sheet (4) also a cartouche of strap­work ornament incorporating a portrait of Friedrich ii von der Pfalz, and a dedication to him by Herold, dated 1555;2 signed with monograms of Clauser and Zacharias Specklin, (5) signed by Clauser and Specklin, lettered a lower right, (6) also a cartouche featuring the arms of Wittelsbach with the collar of the Golden Fleece and a battle scene between a Christian and a Turk, lettered with six distichs;3 signed by Clauser, (7) signed with monogram of Specklin (plus 4), (8) signed with monogram c with a cross and pen, lettered bii lower right, (9) signed by Specklin (plus 3), (11) signed with initials dk (David Kandel), (12) signed with initials dk (David Kandel), (13) signed with monogram of Kandel, (15) signed with initials dk (David Kandel), (16) signed with monogram hs, (17) signed with mono­gram hs, (18) signed with monogram hs.

The sides and bottom have an integral border (width 3.5 cm) of arabesque ornament cut on a black ground with 82 bust-length medallion portraits of Roman and Byzantine emperors and Sultan Suleiman the Great; pasted along the top are three sheets (each circa 6 × 42 cm) with three emblems (Germania victrix, efflorescens Germania, Germania concors) and six accompanying distichs.

Preserved folded in a portfolio.

This large format woodcut, printed on twenty-one sheets and when assembled (as here) measuring over four metres high, is a family tree of the Wittelsbach dynasty over 1000 years, beginning with the Merovingian King Clovis i (466–511), and culminat­ing with the Elector Palatine Friedrich ii (1482–1556) and his wife Dorothea of Denmark. Also shown are the Bavarian and Palatine branches of the house (from Charlemagne to Charles v) and the Electors of the Rhineland Palatinate. Altogether, 934 half-length por­traits and coats of arms are depicted.11

In the bottom tier is an extensive landscape view, showing a fortified encampment and troop movements, and rivers and towns associated with the supposed founders of the house: the river Leye and Noyon (where Charlemagne was crowned in 768), the river Aisne and Soissons (where Clovis i defeated Syagrius in 486 and his early capital), the river Marne with Epernay and Reims, the river Meuse with Sittard and Roermond, and the Rhine with Cologne. At the base of the family tree is a scene of the baptism of Clovis i by Saint Remigius in 496; the camp and troops in the background allude to the battle against the Alemannics at Tolbiac (Zülpich), during which Clovis had resolved to convert to Christi­anity. In the centre is a fantastic three-headed creature (frog, eagle, lion) supporting three sceptres and heraldic insignia.12

In the tier above are two cartouches of strapwork ornament: the one on the left features a portrait of Friedrich ii von der Pfalz, and a dedication to him by Herold, dated 1555, in which Wolfgang von Pfalz-Zweibrücken (1526–1569) and Ottheinrich von der Pfalz (1502–1559) are both mentioned;13 on the other side are six distichs addressed to Friedrich, within a frame incorporating his insignia and a ba­ttle scene between a Christian and a Turk.14

The prototypes for the print include manuscript portrait genealogies;15 genealogical tapes­tries, in which Ottheinrich had a particular interest;16 and large woodcut prints. Among the latter are a pedigree of the counts of Palatine and dukes of Bavaria with 237 portraits, exe­cuted by Hans Wurm (1501);17 the uncompleted tree of the Emperor Maximilian i, by Hans Burgkmair (1509–1512);18 the family tree in the centre and the left half of the ornamental frame­work of the Triumphal Arch of Maximilian i, by Hans Springinklee and Wolf Traut (1515–1517); a massive print, over seven metres in length, of Habsburg genealogy, by Robert Péril (1535);19 and the genealogies from Rudolph i to Charles v, by Jörg Breu the younger (1536–1538).20 The survival rate of all these imposing woodcuts is very poor.21

The ‘Tabula Palatinorum’ was initiated by Herold in 1554. Some costs of the project were met by Friedrich ii and after his death (26 February 1556) by his successor Ottheinrich;22 addi­tional finance was provided by Gabriel Frig,23 but the principal investor appears to have been Herold himself: in 1561 he complained that his losses in the venture amounted to 700 gulden.24

The first edition of the print has a publication line ‘Basileae apud Ioannem Oporinum, anno Christi mdlvi mense martio’ printed outside the frame on the centre sheet of Tier 1.25 A thirty-two page Exegesis of the same date26 and the gift of an impres­sion from the Basel City Council to Henri ii of France on 1 April 155627 confirm March 1556 as the date of first issue. More impressions were dis­tributed in the autumn of 1556 and in 1557, including five sent to the court in Stuttgart, and a copy on vellum intended for Herzog Christoph von Württemberg (1515–1568).28 The publication in 1561 of a promotional pamphlet in German (dedicated to the new Elector Friedrich iii) suggests a reissue of the print about that date.29 Perhaps significantly, impressions are not offered for sale in Oporinus’s stock cata­logue of 1567.30

In 1567, Oporinus sold his business to Balthasar Han and the brothers Hieronymus and Polykarp Gemusaeus. According to the bill of sale, the remaining copies and the wood­blocks used for his edition of Vesalius, De humani corporis fabrica librorum epitome (1543), and for the ‘Pfalzgrevi­schen Stamtafeln’ were specifically excluded.31 The Vesalius blocks were sold on 4 October 1569 to Franciscus Martinus Stella of Brussels, but ended up in Basel in the Officina Frobeniana, where they remained until 1603, when they were acquired by Ludwig König of Basel.32 If the blocks for the Stammbaum also passed to the Froben family, they declined to reprint it under their name.

The blocks reappear in 1680 with Hans Caspar Ulrich (1636–1690), a captain in the service of the Electoral Palatinate, son of Hans Jakob Ulrich (1602–1668), one of the founders of the Zurich Burgerbibliothek (1629).33 He ordered them reprinted with the added legend Gaspar Ulrich de zurich ao 1680 renovavit in the border at lower left; on 14 August 1681 an impression of the reprinted Stammbaum was presented by Hans Caspar to the Burger­bibliothek (now Zentralbibliothek). Another impression dated 1680 is in the Department of Prints and Drawings of the British Museum. 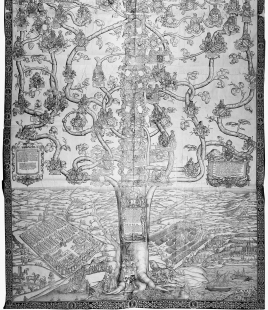 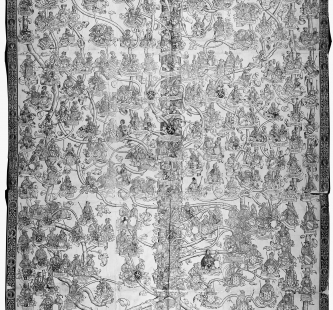 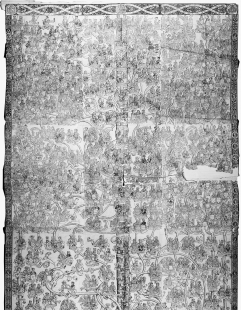 Image
Detail (sheets 16–21), woodcuts by the Monogrammist hs with a pen or brush, and anonymous cutters

● Unlocated, with the Parisian bookseller Joseph Barrois in 183848

8. The monogram (read as both hb and hwb) was formerly associated with Hans Bocksberger the Elder and Hans Blum; it is now recognized as denoting Ieremias Wyssenbach (Hieronymus [Wyssenbach] Basiliensis). His slow work on these blocks caused Wyssenbach to be placed under house arrest on 15 December 1555 for twelve weeks (Die Amerbachkorrespondenz, x /1, op. cit., pp.230–231 note 7).

10. The monogram c with a cross and pen or brush is observed in sheet 8 only.

30. The catalogue lists about 750 titles, of which about fifty are marked with a cross (†) as unavailable: Librorum per Ioannem Oporinvm partim excusorum hactenus, partim in eiusdem officina uenalium, index: singulis ad ordinem alphabeticum redactis, & adiecta impressionis forma (Basel: Johann Oporinus, 1567). Only the 1561 Bericht is offered (p.11).

39. Short-title catalogue of books printed in the German-speaking countries and of German books printed in other countries from 1455 to 1600 now in the British Museum, compiled by A.F. Johnson and Victor Scholderer (London 1962), p.400.