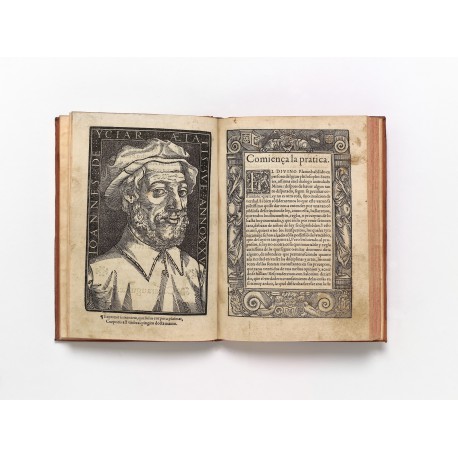 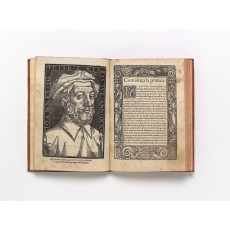 Previous Next
A masterpiece of the Spanish Renaissance
Iciar (Juan de), c. 1522-after 1572

The Arte subtilissima is the revised second edition of the first calligraphy and handwriting manual published in Spain. The woodblocks of the first edition (1548) are re-employed, except for three; twenty-four “Tablas mas estudiadas y mas esmeradas que antes” are added, and these enlarge the book by two gatherings (sixteen leaves). One of the new blocks is dated 1547, seven are dated 1550, and sixteen are undated. J.P.R. Lyell’s complaint that Iciar’s writing books were “thumbed out of existence” is validated by modern bibliographical tools: ten copies of the 1548 first edition, some just fragments, are recorded in public collections worldwide. Our 1550 second edition is less rare, but equally difficult to find complete and in good condition: twelve copies are recorded public collections, of which at least four are incomplete.

We are experiencing significant delays to a number of EU countries as a result of both new customs processes and ongoing Covid-19 measures
pdf (5.66 MB)
Print 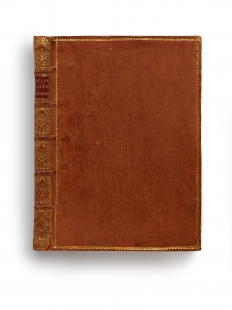 Image
Fig. 1. A monument of the Spanish Renaissance (height of binding 197 mm)

quarto (194 × 133 mm), (86)ff. signed A6 B–L8, not foliated or paginated. Woodcut compartment on title-page incorporating insignia of the dedicatee Philip (later Philip ii, King of Spain), fine woodcut portrait of the author aged 25 (folio A4 verso), each letterpress text page enclosed by a four-piece woodcut border (of which there are four designs), full-page woodcut writing samples (some cut white-on-black using criblé techniques), every block (or group of blocks) signed by the cutter Juan de Vingles either in full, with his mark of a sacred heart surmounted by a crown (in one design supported by the lion of Lyons), or his initials idv ; devices of the printers Jorge Coci and Pedro Bernúz on final leaf.1

Repaired when rebound in the eighteenth-century: title-leaf laid down, margins of folios F5 and F6 repaired, marginal paper repairs in other leaves (occasionally touching borders and signature letters), slight staining; however, for a book of this kind, in unusually fine state of preservation.

The Arte subtilissima is the revised second edition of the first calligraphy and hand­writing manual published in Spain. Like the Italian manuals on which it is modelled, it shows a wide range of styles and alphabets, including the chancery italic, book hands (roman and italic), commercial hands, Roman capitals (including a set copied with few modifications from Dürer), the gothic script, the rotunda, capitals suitable for illumination, monograms and Greek and Hebrew alphabets. The work was an immediate success (six editions appeared before 1566) and continues to be esteemed to this day: ‘There can be no doubt that Yciar’s book has to be counted among the finest calligraphic copy-books to be found anywhere at any time’.2 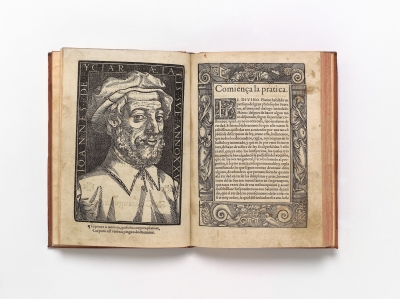 The author, the Basque Juan de Iciar, worked from about 1547 until about 1573 at Saragossa, a centre of culture and the cradle of Spanish printing, as a teacher (of writing and arithmetic) and as a copyist, particularly of choir and service-books for church use, which he wrote in a gothic rotunda style (he is shown on the title-page writing a formal alphabet in a book with one hand and holding a choir book in the other). His aim was to teach children as well as adults, and in the instructions which accompany his specimens, Iciar – influenced by his fellow countrymen Juan Vives and Alejo Vanegas – considers various pedagogical problems, such as whether children should be taught reading before writing, or simultaneously (folios A5–6), and recommends as teaching aids sheets of tin (‘hojas de Flandres’, D5 verso – the idea is similar to that underlying the use of slate and chalk: the child rubs out mistakes with his fingers, and becomes less inhibited in his writ­ing) and alphabets carved in tablets of wood or metal (‘una tablilla de box, o de metal muy lisa’, L4 verso – an apparatus mentioned by Quintilian, endorsed by Erasmus and Palatino: the pupil moves a pen in grooves cut into the letters, until the shapes and movements become natural).

The second edition, as befitted its new dedication, to the prince Philip, Regent of Spain, was revised as an elegant picture book. The author, or perhaps his printer, lightened the text: some instructions (notably the ‘Trata de letra Aragonesa’, on folio E8 verso in the 1548 edition) were abbreviated, some recipes (‘para bermellon… para hazer tornasol… para hazer verde lino… agua gomada; y para destemper la clara del hueuo… para preparar la glossa’, folios B6 recto–B8 verso in the 1548 edition) were excised, and the concluding ‘Trato del modo como este libro se hizo’, in which Iciar described how the blocks were made for his book (folio I7 in the 1548 edition), was deleted. A new ‘Epistola Al Lector’ and Latin verses in praise of the author by ‘Blasij Spesij Doctoris Medici’ are introduced. 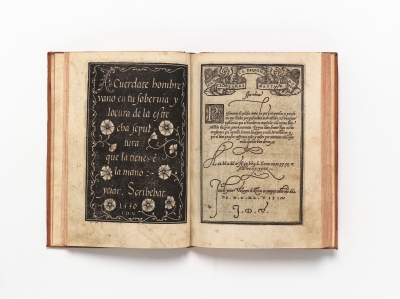 Image
Fig. 3. Left One of the new blocks cut by Juan de Vingles for this second edition. Right A block reprinted from the first edition (1548). Page height 194 mm 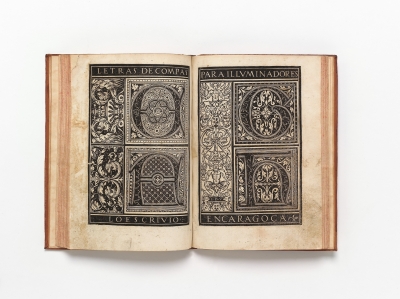 The woodblocks of the first edition are re-employed in the second edition, except for three (two models of a ‘Letra Gotica Echada’ and a ‘Trata de la letra tratizada’, folios D5 recto–D5 verso, D6 verso in the 1548 edition). To their number, twenty-four ‘Tablas mas estudiadas y mas esmeradas que antes’ (‘Epistola Al Lector’, A3 verso) were added, and these enlarge the book by two gatherings (sixteen leaves). One of the new blocks is dated 1547, seven are dated 1550, and sixteen are undated.3

In the new prefatory letter, Iciar claims that certain mistakes (‘algunas faltas’) in the old blocks have been corrected, and that other blocks have been improved by the addition of flourishes (‘muchos rasgos ’). The corrections seem to be no more than several erasures of the date ‘1548’ and substitution of ‘1550’ (e.g. C2 recto, C2 verso). The alteration of old blocks to enhance their decorative effect was more systematic; a typical embellishment is the stippling of the background of blocks printed white-on-black (e.g. C6 verso, C7 recto, E6 verso, H3 recto, H3 verso). This work, together with the presentation of Iciar’s text within broad frames of newly-cut border ornament (two pieces are dated 1550), and the introduction of an attractive sub-title (a block from the Jorge Coci-Pedro Bernúz stock, in use since 1548; see reproduction by Sánchez p.354), make this one of the most beautiful books of the Spanish Renaissance.

Iciar’s engraver was Juan de Vingles (1498–circa 1552), a son of the Lyonese printer Jean i de Vingles (active 1493–1513), whose device of the initials iv within a crowned heart he adopted. Juan is first recorded in Spain in 1534, when he cut a block for the printer Carlos Amorós of Barcelona;4 in 1535, he was working at Saragossa for Pierre Hardouyn; in 1547–1550 he was collaborating with Juan de Iciar; and he is last heard of in 1552, working as a publisher at Pau in the south of France, in partnership with Henri Poivre. He took his inspiration from many sources, including Lyonese editions of Horae and Alciati’s Emblems, printed in 1548.5

The woodcut border enclosing the title is from the block utilised for the 1548 edition, printed by Bartholomé de Nágera ‘a costas de Alonso de Frailla, y Iuan de Iciar, y Iuan de Vingles’, on 22 August 1548 (Sánchez no. 278). The fine and highly original woodcut por­trait of Iciar also was cut for the first edition, and it reappears in Iciar’s Arithmetica prac­tica printed at Saragossa by Pedro Bernúz ‘a costa del auctor y de Miguel de Cepilla [Zapila] mercador d’libros’, on 16 February 1549 (Sánchez no. 285). It seems that Miguel de Zapila was involved also in publishing the 1550 Arte subtilissima: the title-page of the copy reproduced by Cotarelo y Mori (pl. 72) has his imprint ‘A costa de Miguel Cepilla mercader de libros’ added in the lower margin.

J.P.R. Lyell’s complaint that Iciar’s writing books were ‘thumbed out of existence’6 is vali­dated by modern bibliographical tools: perhaps ten copies of the 1548 first edition, some just fragments, are recorded in public collections worldwide.7 Our 1550 second edition is less rare, but equally difficult to find complete and in good condition. These copies are known to the writer:

Just four complete copies13 have passed through the auction sale rooms in the last sixty years: