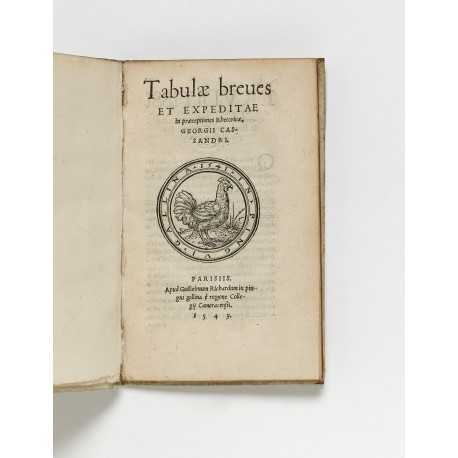 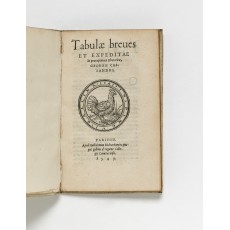 The earliest known edition of this popular textbook, dividing rhetoric into three parts: invention, disposition, and elocution (omitting pronunciation and memory), each introduced in a series of questions and answers explicated by examples, followed by some precepts of composition. Three other copies can be traced ● Grenoble, Bibliothèque municipale, F 3492 CGA ● New Haven, Yale University, 2001.635 ● Paris, Bibliothèque Mazarine, 8° 20461-5.

We are experiencing significant delays to a number of EU countries as a result of both new customs processes and ongoing Covid-19 measures
pdf (1 009.09 kB)
Print

One of three known copies

The earliest known edition of this popular textbook, dividing rhetoric into three parts: invention, disposition, and elocution (omitting pronunciation and memory), each introduced in a series of questions and answers explicated by examples, followed by some precepts of composition. 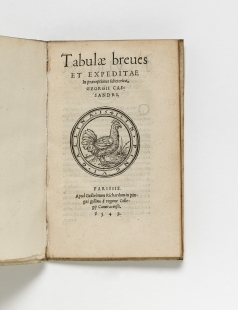 The author (Jooris Casant) had matriculated in the Collegium Trilingue in Louvain in 1531 and in 1534 was promoted Master of Arts.1 He taught thereafter in the famous school of Eligius Hoeckaert in Ghent, where his edition of the Sententiae of Plautus (1536) and a short treatise on coinage (1537) were published at the press of Joos Lambrecht. In 1541 Cassander was appointed professor of bonæ litteræ in the school founded by the late Bishop Joannes Albius (de Witte) in Bruges and on 3 May 1541 delivered his inaugural oration in praise of the founder and of the town of Bruges (printed by J. Lambrecht, 1541). In February 1543 Cassander abruptly resigned his post to travel to Italy with his patron, Cornelius Wouters; on his return, he settled in Cologne, and in September 1544 matriculated there as a student of theology.

Cassander’s textbook is dedicated at Bruges in 1542 to the trustees of Albius’ foundation, the physician Cornelius van Baersdorp (1484–1565), and the banker, Jehan Claissone (Claeyssone). Since there is no trace of an edition of that year printed in Flanders, Cassander may have taken the manuscript with him when he left Bruges, and caused it to be printed at Paris. An edition from the press of Guillaume Richard, allegedly dated 1542, is cited by Renouard; however no copy of it is recorded elsewhere.2 Our edition of 1543 was published by Guillaume Richard in partnership with Chrétien Wechel, whose share of the copies has the imprint ‘Ex officina Christiani Wecheli, sub scuto Basiliensi in uico Iacobaeo & sub pegaso in uico Bellouacensi, anno 1543’ on title-page. Just three copies of the edition are known to the writer:3

In 1550, an edition ‘Multò quàm antea emendatiores, atque ab ipso autore recognitae’ was first published at Cologne. Apart from an elaboration of the dedication, acknowledging van Baersdorp’s appointment in that year as court-physician to the Emperor Charles v, it is an unchanged reprint.

3. Buisson, op. cit., p.125, locates a copy in the Bibliothèque municipale de Chartres which is not confirmed by modern catalogues. The 1543 edition is overlooked by most later stu­dents of Renaissance rhetorical theory, who persis­tently identify 1548 as the earliest edition; see Lee A. Sonnino, A Handbook to Sixteenth-century Rhetoric (London 1968), p.234; and Lawrence D. Green and James J. Murphy, Renaissance rhetoric short title catalogue, 1460–1700 (Aldershot 2006), p.100.

4. Cited by Sonnino and by Green and Murphy, op.cit., p.234, otherwise unverified.