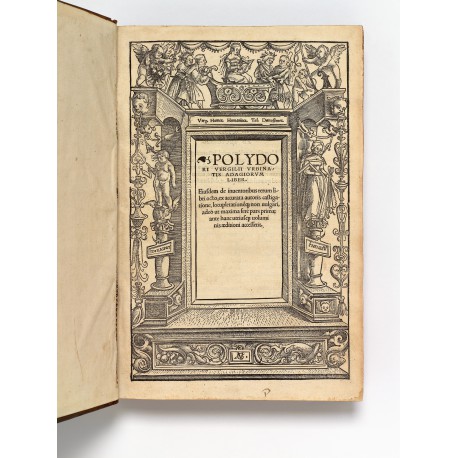 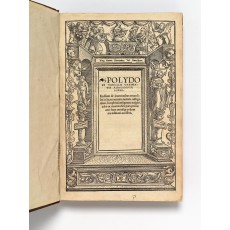 The Italian historian’s famous ‘History of inventions and discoveries’, the fine Fugger copy of the second, revised edition

First printing of revised and vastly enlarged editions of Polydore’s collection of adages or proverbs and of his encyclopaedia De Inventoribus rerum, on those who have discovered things, in a well-preserved calf binding executed circa 1550 in Paris for Marcus (Marx) Fugger. The edition is distinguished by a fine woodcut title-border representing the “Triumph of Humanitas” by Urs Graf.

The spine of the binding abraded at foot, with partial loss of leather in one compartment; vellum spine labels missing; otherwise a faultless copy.

First printing of revised and vastly enlarged editions of Polydore’s collection of adages or proverbs and of his encyclopaedia De Inventoribus rerum, on those who have discovered things, in a well-pre­served contemporary calf binding of circa 1550 executed in Paris for Marcus (Marx) Fugger. The edition is distinguished by a fine woodcut title-border representing the ‘Triumph of Humanitas’ by Urs Graf (see Fig.1).1

The Adagia or Proverbiorum libellus was originally published at Venice in 1498 as a col­lection of 306 proverbs drawn exclusively from classical sources. In the dedicatory letter to Richard Pace written for our Basel edition, the author explains that he began to collect adagia sacra because he felt that Christians should not depend on Greek and Latin prov­erbs alone, but should season their writings also with Christian wisdom. These adagia sacra, taken from the Bible and the Gospels in particular, are 431 in number, and practi­cally double the size of the work. 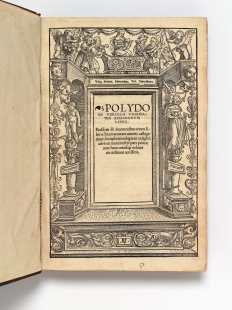 Polydore’s De Inventoribus rerum, an encyclopaedia of inventors and inventions mainly from the classical past, but also Jews, Egyptians, and Asiatics, was first printed at Venice in 1499, as three books dealing with material inventions, natu­ral philosophy, medicine, and other profane matters. In our 1521 edition, Polydore introduced five new books on the history, organisation, and rituals of the church, including much information on pagan cus­toms, which ensured that the book was placed on the Index (first by the Sorbonne in 1551, then on the Trent Index in 1564). The work is celebrated as the earliest history of medicine after the invention of printing, as the first modern effort to explore the history of technology, and as an early and original essay in anthropology and comparative religion. Also considered are painting and painters (notably Raphael), sculpture, and architecture in the author’s native Italy.2 Thirty Latin editions had appeared by Polydore’s death in 1555 and in all more than one hundred editions in various recensions and seven languages were published by the eighteenth century.3 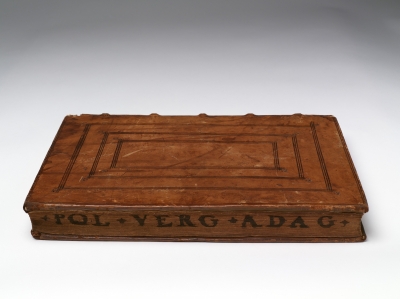 The binding belongs to a group of similarly bound volumes that once formed a substantial part of Marcus Fugger’s library. The material of these tasteful bindings is a smooth brown calf decorated by one, two, or three panels (see Fig.2), each formed by three fillets, with a fleur-de-lys stamped at the angles in gilt or blind (as here). The centres of the covers some­times are left empty (as here), or are decorated by an emblematic bird tool or double-headed eagle.4 The volumes of this group were all bound circa 1545–1552 in the same anonymous (probably Parisian) workshop, which apparently also executed luxurious bind­ings for Fugger.5

Most of Fugger’s books have the author’s name (and/or title) boldly lettered in ink up the fore-edge, indicating how the books originally stood on the shelves in his library. At an uncertain, later date, the volumes were shelved in the modern manner, and a librarian pasted vellum labels descriptive of the contents onto the spines (as often, the label has fallen away from our volume, leaving a residue of the adhesive).6

A large part (if not all) of Marcus Fugger’s books descended to the princes of Oettingen-Wallerstein; the finest were sold in Munich by Karl & Faber in 1933–1934. Many others, incorporated in the Oettingen-Wallerstein family library at Schloss Harburg (formerly Maihingen), were sold in 1980 to Freistaat Bayern and deposited in Augsburg Univer­sity Library. The remnants, including the present volume, were consigned anonymously to Sotheby’s, and sold on 5 December 1991.