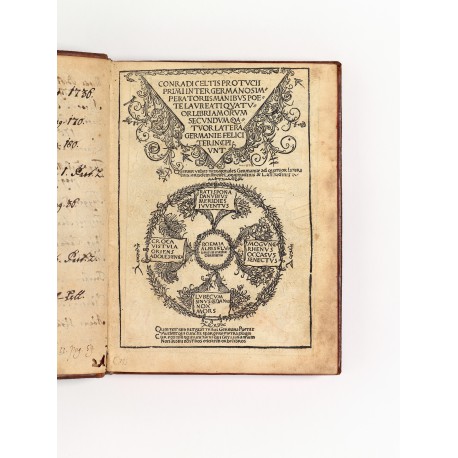 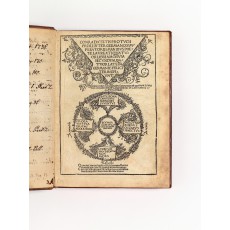 paper watermark monogram ma (Maria) with a cross, like Meder 316.1 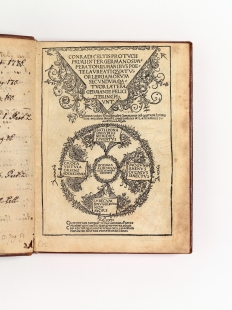 First printing of the Amores, four books of vivid erotic poems, the major work of the imperial poet laureate Conrad Celtis, in which he sings the praises of his fatherland, choosing a heroine and a principal city for each book: to the East, Hasilina of Cracow; to the South, Elsula of Regensburg; to the West, Ursula of Mainz, and to the North, Barbara of Lübeck. Some critics interpret the poems as autobiographical, how­ever only Hasilina so far has been identified, and the others may be composite figures drawn from many women. The preceding dedicatory address to the Emperor Maximilian i is ‘the most impressive state­ment of Celtis’s Neoplatonist belief in Love as the vital principle of the universe’.3

The other texts printed in the volume are ‘Generalis Germaniae descriptio carmine heroico’, a work by Celtis previously printed together with Tacitus’ De origine et situ Germanorum at Vienna between 1498 and 1500; ‘De origine, situ, moribus & institutis Norimbergae’, Celtis’s eulogy to the city’s govern­ment, citizens, buildings, and history, written in 1496, printed here for the first time; ‘Hymnus Saphicus in Vitam Sancti Sebaldi’, com­posed by Celtis for the Sebaldusfest of 1493, formerly printed at Basel circa 1494 and Nuremberg circa 1501; ‘Ludus Dyanae’, a Festspiel by Celtis per­formed at Linz before the Emperor and Bianca Maria Sforza by twenty-four members of the Sodalitas Danubiana, on 1 March 1501, previously printed at Nuremberg 15 May 1501; ‘Privilegium erectionis Collegii Poetarum et Mathemati­corum’, the imperial charter founding a college of poets and mathematicians within the uni­versity of Vienna, dated 1501; Vinzenz Lang’s ‘Panegyricus ad Maximilianum pro instituto & erecto collegio poetarum & mathe­maticorum’, dated 2 February 1502; an address by Sebald Schreyer, Celtis’s benefactor, dated 1 March 1500, followed by Celtis’s reply, dated at Vienna, 1 February 1502. Although Celtis envisaged the Quatuor libri amorum as the prologue of a greater corpus, a Germania illus­trata, the remaining volumes were never written. 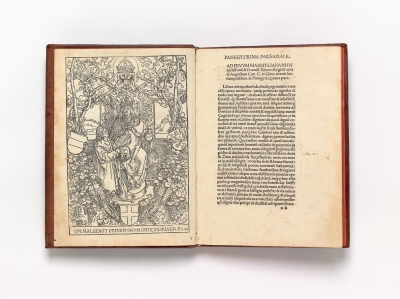 Image
Fig.2 Wood­cut depicting the author presenting his book to the Emperor, by Dürer (woodcut 216 × 150 mm)

Three woodcuts appear among the preliminaries, each explicated in verses by Vinzenz Lang. The first wood­cut depicts Celtis presenting his book to the Emperor (see Fig.2); the second is an ‘Allegory of Philosophy’, inspired by the description in Boethius’ Consolatione Philoso­phiae and defining the four great human cultures as Egyptian, Greek, Roman and German; and the third shows the author at his desk: on nearby shelves are six volumes of the Latin poets, and in surrounding com­partments the muses Thalia and Clio, Minerva, Mercury, Hercules, Cytharea, Phoebus, and Bacchus. Each of the four allegorical love poems is accompa­nied by a woodcut topographical view of the heroine’s native city.4 The treatise on Nuremberg, dedi­cated ‘Ad Senatum’, has a folding view ‘Vrbs Norinberga Quadrifinia’ (borderline 180 × 295 mm), based on one produced in 1493 in the workshop of Michael Wolgemut for Schedel’s Weltchronik; printed on its verso are imperial insignia and the insignia of Nurem­berg. The verses on Saint Sebaldus, Nuremberg’s principal patron saint, are illustrated by a copy of the woodcut executed by Dürer for the edi­tion published in 1501. On the last leaf is a woodcut of ‘Apollo and Daphne’ with inscriptions in Greek and Latin and the insignia of Willibald Pirckheimer (Fig.3). 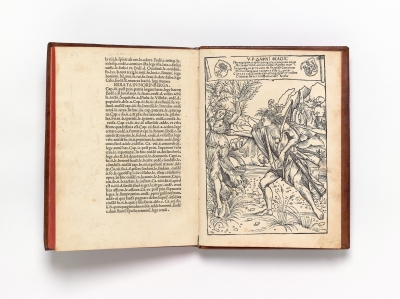 Image
Fig.3 Woodcut of ‘Apollo and Daphne’ with inscriptions in Greek and Latin, and the insignia of Willibald Pirckheimer

The title (Fig.1), the woodcut of the author in his study, and four topographical woodcuts are virtually the same size (borderlines 215 × 145 mm) and are believed to have been devised by Celtis himself, and executed by a single cutter, variously identified as Peter Visscher the elder, Peter Visscher the younger, Jacopo de’ Barbari, and Hans Süss von Kulmbach.5 The ‘Allegory of Philosophy’ (219 × 148 mm, folio A6 verso) bears Dürer’s familiar monogram and it and the unsigned dedication woodcut (216 × 150 mm, folio A1 verso; Fig.2) are universally acknowledged as his work.6

This is second of three books issued by the still-unidentified ‘Printer for the Sodali­tas Celtica’. All three employ an ambiguous printer’s device bearing the initials ‘A.P.’, of which there are two cuttings, one black-on-white and the other white-on-black (the de­vice in this copy is cut white-on-black). Meder saw a copy of the Amores displaying the alternative cutting and took it as evidence of two separate editions of the Amores.7 Frank Hieronymus noted the absence in a few copies of the ‘Apollo and Daphne’ woodcut and postulated another separate issue or edition.8 A unique copy, containing on an otherwise blank unsigned bifolium an additional woodcut of ‘Apollo on Parnassus’ (used in two later books associ­ated with Celtis, both printed at Augsburg by Erhard Ogelin in 1507), is also supposed to repre­sent a sepa­rate issue.9

Although some forty copies of the Amores are located in public collections, the book is rare in commerce: only five complete copies can be traced by the writer in auc­tion sale records

These copies have featured in recent exhibitions