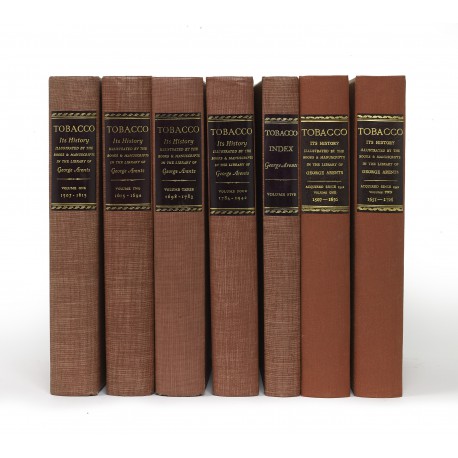 Tobacco : Its history illustrated by the books, manuscripts and engravings in the library of George Arents, Jr. Together with an introductory essay, a glossary and bibliographic notes [by Jerome Edmund Brooks; volume 5 index by Anne M. Nill] § Tobacco. A catalogue of the books, manuscripts and engravings acquired since 1942 in the Arents Tobacco Collection at the New York Public Library. From 1507 to the present. Compiled by Sarah Augusta Dickson [parts 8-10 compiled by Perry Hugh O’Neil] (Arents Tobacco Collection Publications, 7-12)

A fine, complete set of the catalogue of the private library of George Arents Jr (1875-1960), privately printed in New York between 1937 and 1943 in an edition of 300 copies (this set is number 292). In 1944, the collection was received by the New York Public Library, and in 1952, an index volume (names of authors and subjects) was prepared by the New York Public Library. Ten supplements describing later additions to the collection were compiled by Arents Librarian Sarah Augusta Dickson and Curator Perry O’Neil from 1958 to 1969; subsequent acquisitions have been catalogued electronically. There are 3956 individual, catalogued entries (4235 separate, physical items). “Although the collection is devoted to tobacco and includes almost every important work dealing with the subject, it also contains many historical, literary, and artistic works in which tobacco appears only incidentally” (NYPL). ¶ Faultless set.